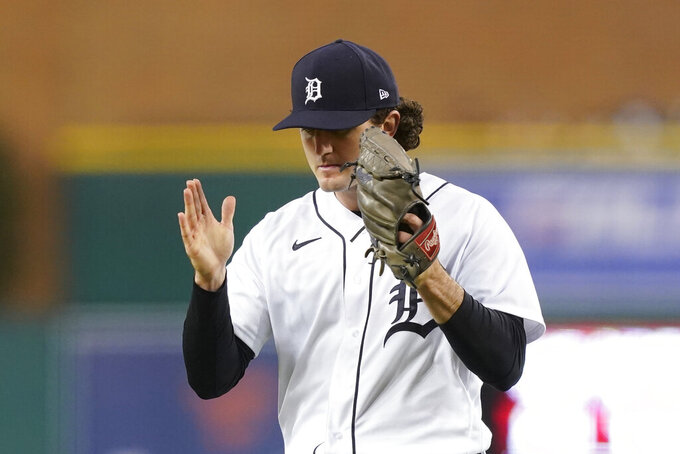 Carlos Osorio, ASSOCIATED PRESS
Detroit Tigers starting pitcher Casey Mize reacts after the last out in during the sixth inning of a baseball game against the Kansas City Royals, Wednesday, May 12, 2021, in Detroit. (AP Photo/Carlos Osorio)

DETROIT (AP) — Miguel Cabrera drove in two runs and surpassed Omar Vizquel for the most major league hits by a Venezuelan player, leading the Detroit Tigers past the slumping Kansas City Royals 4-2 on Wednesday night.

“I feel a sense of release, because people have been waiting for me to break this record for a long time,” Cabrera said. “This has been a tough season, but this is a good night.”

Cabrera was hitting .098 on May 5, but has six hits in his last four games.

“I have been struggling so much and I wasn't helping the team win,” he said. “I know this team is better when I'm better, and now I feel like I'm helping us win games.”

“It's really hard to deal with something like this, especially with the confidence we have in ourselves,” starting pitcher Danny Duffy said. “We know we're better than this, but we've lost 10 straight games. There's no escaping that, and the only way to end it is to win.”

Casey Mize (2-3) allowed two runs on three hits and two walks in six innings. He hit one batter and struck out four. Three Detroit relievers finished, with Gregory Soto pitching the ninth for his fourth save.

Mize paid tribute to his teammate after his 14th career start.

“It was amazing to be on the field when Miguel Cabrera became the hit leader of all the players who have come out of Venezuela,” Mize said. “Being able to play on a team with him is something I'll remember for the rest of my life.”

Duffy (4-3) gave up a season-high four runs in six innings.

“This was frustrating,” Duffy said. “I wasn't finishing off my slider, and I really didn't command my off-speed stuff at all. That's a bummer, but I have to keep working on it.”

The Royals took a 2-0 lead in the first. Mize hit leadoff hitter Whit Merrifield with a pitch and Carlos Santana worked a 10-pitch walk. Salvador Perez followed with an RBI double and Andrew Benintendi added a sacrifice fly.

“That was a great start, but we didn't do enough in the rest of the game,” Royals manager Mike Matheny said. “It's hard to build momentum when you get three hits in the game."

JaCoby Jones' single made it 2-1 in the second and Cabrera tied it with his first hit of the night.

Detroit added two runs in the fifth. Robbie Grossman led off with a triple into the right-field corner. After Duffy struck out Jonathan Schoop, Jeimer Candelario doubled over center fielder Jarrod Dyson’s head.

Cabrera then hit a grounder through the right side of the infield to score Candelario.

Mize thought his night was over in the sixth inning. After Santana led off with a walk and took second on Perez's single, Jorge Soler grounded into a double play on Mize's 95th pitch.

Tigers manager A.J. Hinch made his way to the mound, but surprised Mize by leaving him in the game.

“We were both frustrated with how many hitters he had fallen behind, and I wanted to let him know that he had to go after the next batter," Hinch said. “If he wanted it, I was going to give him the chance.”

Mize escaped the inning when Benintendi flied out on the first pitch.

“I was glad he had the confidence in me to leave me out there in that spot,” Mize said. “It made getting the out even bigger.”

The Tigers placed C Grayson Greiner (hamstring) on the 10-day injured list and purchased the contract of C Eric Haase. Detroit released RHP Franklin Perez, a key part of the trade that sent Justin Verlander to Houston, to make room for Haase on the 40-man roster.