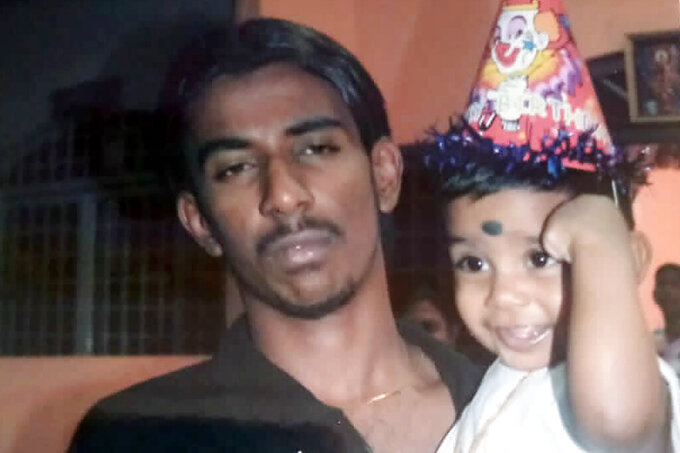 Uncredited, ASSOCIATED PRESS
This undated photo provided by Sarmila Dharmalingam, right, shows her younger brother Nagaenthran K. Dharmalingam, second from left, with their cousins in Ipoh, Malaysia. Nagaenthran, 33, was scheduled to be executed by hanging for trying to smuggle less than 43 grams (1.5 ounces) of heroin into Singapore, but was issued a reprieve Tuesday, Nov. 9, 2021, following a diagnosis of contracting COVID-19. (Sarmila Dharmalingam via AP, File)

SINGAPORE (AP) — Singapore's top court on Tuesday postponed the appeal hearing for a Malaysian man on death row who is believed to be mentally disabled, after he was diagnosed with COVID-19, in a case that has drawn international attention.

Nagaenthran K. Dharmalingam, 33, was scheduled to be executed by hanging on Wednesday for trying to smuggle less than 43 grams (1.5 ounces) of heroin into the country.

The Malaysian national was sentenced to death in November 2010 under Singapore's strict anti-drug laws. Previous attempts to reduce his sentence to life in prison or receive a presidential pardon failed, despite pleas from the international community and rights groups.

The Court of Appeal's Judge Andrew Phang said Nagaenthran had tested positive for COVID-19, after the defendant had been brought into dock but was then abruptly taken away.

The court dismissed a prosecutor’s suggestion to have Nagaenthran testify via video.

“We have to issue a stay of the execution until all proceedings are concluded. That is the proper order of things,” Phang said.

The stay on the execution followed a court ruling on Monday that had already granted a stay pending the result of the appeal at Singapore's highest court.

Nagaenthran’s defense lawyer, M. Ravi, has argued that executing a mentally disabled person is a violation of Singapore’s Constitution.

Death penalty opponents say Nagaenthran’s IQ of 69 was disclosed during an earlier lower court hearing, a level that is internationally recognized as an intellectual disability.

But the court ruled that Nagaenthran knew what he was doing and upheld the death sentence.

Defense lawyer Ravi told reporters that he was “pleasantly surprised” by Tuesday's development and will use the extra time to bolster his case.

“A state-sanctioned murder ... has been averted by a COVID disease. That seems to be the irony of this development today,” he said.

The Singapore Prison Service said it only received the positive result of Nagaenthran's test after he had arrived in court. The court was “immediately informed” and he was isolated.

“Nagaenthran is well and asymptomatic. He did not report any illness prior to his court hearing. He is not vaccinated as he had opted not to receive any COVID-19 vaccine,” it said in a statement.

Several inmates and staff of the prison block where he is housed also tested positive for the virus. The block has since been locked down.

The agency said that as of Sunday, 97% of Singapore's eligible inmates have received at least one dose of a COVID-19 vaccine and 90% had received two doses.

Nagaenthran’s mother, two younger siblings and cousin were not present in the courtroom Tuesday, but have been allowed daily prison visits since traveling from their hometown of Ipoh in northern Malaysia last week.

His older sister, Sarmila Dharmalingam, who didn’t make the trip, said these visits will be replaced by phone calls, given the news.

While she worries about her brother's condition, she said she is relieved that his execution has been stayed. "But I’m only a little bit happy, because I know they haven’t actually stopped the execution, only given it a temporary stay,” Sarmila said.

Legal experts — including with the Anti-Death Penalty Asia Network and Amnesty International — have called the execution of an intellectually disabled man inhumane and a violation of international law.

Members of the international community, representatives of the European Union, and global figures such as British business magnate Richard Branson have also called for Nagaenthran’s life to be spared, and used the case to draw attention toward anti-death penalty advocacy.

Malaysia’s anti-drug laws are similarly harsh, with the majority of people on death row in the country due to drug offenses.

“The penalties, including the death penalty, for the illegal trafficking, importation or exportation of drugs are made clear at our borders, to warn traffickers and syndicates of the harsh penalties they potentially face,” the ministry said.

The prison service said Nagaenthran will be given medical attention, and the appeal hearing will be held after he recovers.

Anyone found with over 15 grams (0.5 ounces) of heroin faces the death sentence in Singapore, although judges can reduce this to life in prison at their discretion.

The last execution in Singapore was in 2019.