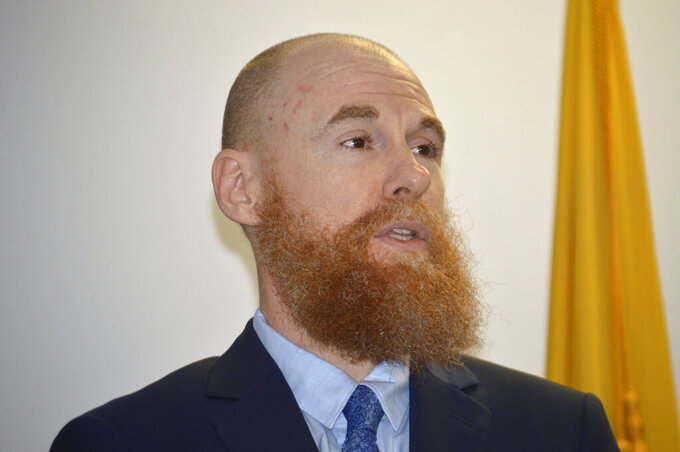 Russell Contreras, ASSOCIATED PRESS
FILE - In this Jan. 7, 2019, file photo, Brian Blalock, Secratary-designate for the New Mexico Children, Youth and Families, Department, speaks to reporters after being introduced in Albuquerque, N.M. New Mexico’s child welfare agency is promising technology improvements and increased transparency after its use of an auto-deleting messaging app came under fire by state lawmakers and others. Blalock said the use of the encrypted Signal app was suspended, that public records request staff has been expanded under his watch, and the agency is on track with the largest software upgrade in decades that will improve agency operations. (AP Photo/Russell Contreras, File)

SANTA FE, N.M. (AP) — New Mexico’s child welfare agency is promising technology improvements and increased transparency after its use of an auto-deleting messaging app came under fire by state lawmakers and others.

“When I came in the (Children, Youth and Families Department) was described— fairly or not — to me as a black box,” said Cabinet Secretary Brian Blalock, who was appointed in 2019. ”And so we wanted to fix that."

Blalock said the use of the encrypted Signal app was suspended, that public records request staff has been expanded under his watch, and the agency is on track with the largest software upgrade in decades that will improve agency operations ranging from the foster care system to juvenile justice system.

Blalock made his remarks to The Associated Press in an interview May 17, before news broke that he had fired on May 6 top staffers who had advised him and senior deputies on both the use of the app and the software development efforts.

The fired staff members said that a culture of punishing dissent threatens an upgrade of the agency's data system essential for federal funding and exacerbated a recent public relations crisis over the use of the encrypted messaging app.

Debra Gilmore was the director of the Office of Children’s Rights until she was fired May 6 along with her husband, Cliff, who worked as the agency’s spokesman. The Searchlight New Mexico investigative reporting website first reported the firing of the Gilmores.

She said the department reprimanded her for “failure to form productive and professional work relationships,” including with project managers tasked with upgrading the agency's Child Welfare Information System, a database that is essential to running New Mexico's foster care system and meeting federal data reporting requirements.

Debra Gilmore said the project managers were upset because she pushed them to account for the project's sprawling scope and nebulous deadlines.

“I just could not get a satisfactory answer to the ‘how’ — how are we going to do that?” said Gilmore, a lawyer and certified project manager with decades of experience in social work project management.

Cliff Gilmore said he raised concerns about the use of the Signal app, which in some conversations was set to delete messages every 24 hours.

The department ultimately stopped using the app altogether after a report by Searchlight New Mexico uncovered the practice and fueled criticism over the possibility that public records were being destroyed.

“Our office is pleased that CYFD has discontinued the use of the app, and we are reviewing to ensure that the agency is complying with the law and best practices for retention of public information,” said Matt Baca, spokesman for the New Mexico Attorney General’s Office.

Cliff Gilmore said he and his wife were aggressively recruited by the child welfare agency last year because of their extensive experience, including his decades of work as a spokesman for the military where he oversaw a team of 65 press officers serving a 55,000-strong Marine force.

The couple says Debra Gilmore was hired in December, because of her decades of experience in state government and NGOs, including running a foster care advocacy organization in Oregon.

“I had never, until this time, been in a room where if I said, ‘I think we got a problem here' that the answer would be anything other than ‘OK, tell me more ’ ” he said. “But I got, ‘Oh you’re new, you don’t understand.’ ”

Instead, he said that his advice to not use the Signal app and the auto-delete feature was ignored, though the agency eventually stopped using the app.

The department disputed nearly every aspect of the couple's account of problems at the agency.

“What the Gilmores have, and are asserting is ill-informed and is not based on experience or expertise in New Mexico state government, state procurement laws, state IPRA and records retention laws, or importantly the technology needs of CYFD,” spokesman Charlie Moore-Pabst said. “It is unfortunate in their very short time in NM government they have chosen to criticize CYFD’s operations without all the facts and without an understanding of New Mexico law.”

The agency has struggled in the past with employees claiming they have been retaliated against.

“We welcome whistleblowers, we welcome attorneys and demand letters. We welcome any opportunity to improve CYFD,” Blalock said in the May 17 interview. "There’s a tension between allegations of whistleblowing and when you have an employee that’s just not working out.”

The department has said that the technology upgrade is key to meeting federal requirements, both for efficient case management and organizing and sending data to the federal government and the public. But the department said it is on schedule in the next round of software upgrades.

The $44.9 million project has seen delays in receiving approval for federal funding, threatening the budget, according to a recent Legislative Finance Committee IT project status report for the first quarter of the 2021 fiscal year. Out of nine state agency IT projects reviewed, the Children, Youth and Families Department's was the most at-risk of failure.

The current system makes it hard for the department to report required data to the federal government and hinders public access. When The Associated Press tried to compile a 50-state survey of a dozen child welfare indicators, New Mexico was one of 14 states that did not produce the data within a matter of weeks and free of charge.

Debra Gilmore said that without answering the tough questions she believes got her disciplined, the software project will fail to improve case management. “I am concerned because it is an opportunity to tailor the next generation of software to the needs of the children and families being served,” she said.

Cliff Gilmore added that he would expect policies that deal with communication among employees and data to be articulated clearly in writing and publicly available, but that doesn't appear to be the case.

While Blalock has said the agency has policies and procedures in place to prevent destroying records that should be retained, the department confirmed that there was no official policy on the use of Signal specifically. It also doesn't have a guidance document on whistleblower protections, relying only on state statutes.

Moore-Pabst said the department has recently updated its retaliation policy, though it focuses more on employees participating in formal investigations rather than dissenting views.

On May 25, the department began offering drop-in training on the ethics of whistleblowing, optional for senior staff and required for certain caseworkers.

This story corrects the location of a foster care advocacy organization run by Debra Gilmore.