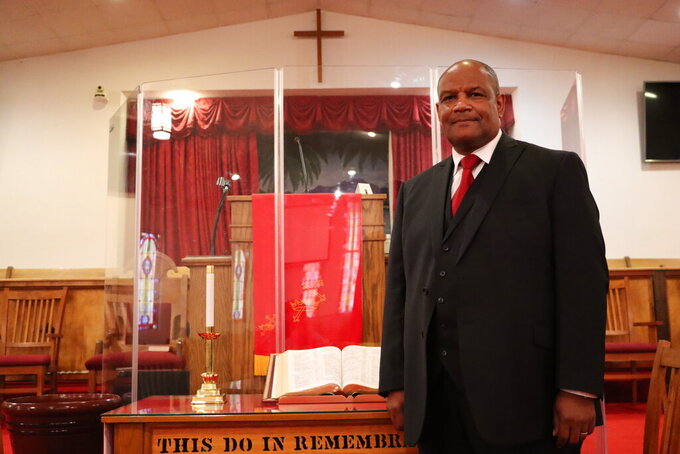 Damian Dominguez, ASSOCIATED PRESS
This Jan. 2, 2021 photo shows The Rev. Danny Webb, pastor at Old Mount Zion Baptist Church for 13 years in South Carolina. Webb is continuing the legacy of the 160-year-old church first pastored by the Rev. Ned Starks when it was founded in 1861. (Damian Dominguez/The Index-Journal via AP)

GREENWOOD, S.C. (AP) — No one drove to Old Mount Zion Baptist Church in the 1920s. Instead, Juanita Griffin remembers families walked to church together.

Born in 1921, Griffin’s 100 years of living have only strengthened her love for the Lord. She was told as a girl that her great-great-grandfather was the Rev. Ned Starks, the church’s first pastor. She was baptized by his successor, the Rev. James Foster Marshall.

The church was a wooden structure then, nothing like the brick building today at 3107 S.C. Highway 248.

“Lord have mercy, it was a whole lot different than it is now. I remember my parents went to church, and as we got older, they’d carry us to church too,” Griffin said. “It was full of people. If you didn’t show up to church early, you couldn’t get in.”

Revivals in August brought churches from throughout the county, and while Griffin has been to others, Old Mount Zion is the only church she’s been a member of in her life. Each member is a part of her extended family.

Services these days don’t look the same as they did in Griffin’s childhood. Masks are required during the COVID-19 pandemic, and worshippers have their temperatures checked at the door, with church staff keeping a log of everyone who comes in.

Some things never change, though. Among the hymns the choir sang during the Aug. 1 service was “Hold to God’s Unchanging Hand,” written in the early 1900s before Griffin was born. Heritage is important to Old Mount Zion. It’s baked into the church’s history.

“They were slaves who gathered here, amen,” the Rev. Danny Webb said at the start of the service. “For 160 years, Old Mount Zion has been a beacon of hope for this Epworth community. ... Here we are, 160 years later — amen — testifying all over Greenwood that God is good.”

Old Mount Zion celebrated its 160th anniversary on Aug. 8. The event was already at capacity a week earlier, with church members making shirts to celebrate and promote the event.

The church was founded by a group of enslaved people in 1861, before the emancipation proclamation went into effect at the start of 1863, freeing enslaved people in the rebelling Confederacy. The hope and newfound freedom fueled the church’s founders, and strengthened their faiths, Webb said.

Webb’s service celebrated the fact that worshippers come to the church today because a group of enslaved people decided to do what it took to worship. While Webb and the church historian haven’t found any evidence the original founders were actually freed from slavery, he said he knows they intertwined their original African faiths with the Christianity of slave-owners. The result was a church that was acceptable to slave-owners while still providing fulfilling worship for its members.

“Historically, slaves would worship with their masters, and to be able to come together and have a place to worship that they could at least, in theory, call their own,” Webb said. “It had to be, in a word, liberating.”

It’s an expressive form of worship, Webb said, one that exalts an often-oppressed people and channels their love of God into service for their communities.

“We have not forgotten a God who made it possible for us to be free today,” he said.

It’s not hard to see that legacy shine through in Benjamin E. Mays, who laid the intellectual groundwork for the civil rights movement and was a spiritual mentor to Martin Luther King Jr. His family is buried on the church grounds, and one of the building’s stained glass windows features a dedication to his parents.

Celebrating that legacy was made easier because there was no shortage of volunteers to set up for last weekend’s anniversary.

“We grew up in the church. This is where our grandparents, our parents, aunts and uncles, cousins and siblings were baptized and got married,” said Vivian Archie, who was on the anniversary committee. “This is a united church. If you ask, they step up without hesitation.”

Last Sunday, church members gathered to celebrate the anniversary enjoyed outdoor activities, an inflatable bounce house for the children, games and prizes, along with a visit from the police and fire departments and a group of bikers coming to show off their motorcycles, said Bishop Henry Watts. Behind the fun, the committee has been proudly celebrating the church’s scholarship programs, civic groups, health ministry and other outreach arms.

“I look at it like family — the church is my family,” Watts said.