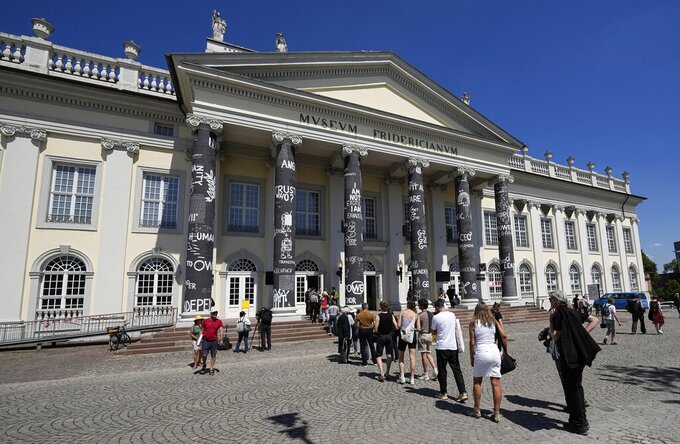 Martin Meissner, ASSOCIATED PRESS
Visitors cue in front of the museum Fridericianum during the press preview of the documenta 15, the world's most significant exhibition of contemporary art, in Kassel, Germany, Wednesday, June 15, 2022. This years documentary is curated by Indonesian artist collective Ruangrupa, every documenta is limited to 100 days of exhibition and takes place every 5 years. (AP Photo/Martin Meissner)

BERLIN (AP) — The curators of a major art show in Germany have apologized for including a work featuring antisemitic elements that prompted an outcry at the event's opening this week.

Organizers of the documenta fifteen show in Kassel ordered the banner by Indonesian collective Taring Padi, titled “People’s Justice,” to be taken down Tuesday following widespread criticism from Jewish groups and German and Israeli officials.

The installation featured a soldier with the face of a pig, wearing a neckerchief with a Star of David and a helmet inscribed with the word “Mossad,” the name of Israel’s intelligence agency.

Taring Padi had insisted that the work — which it said was first exhibited at the South Australia Art Festival in Adelaide 20 years ago — was “in no way related” to antisemitism, but instead referred to the post-1965 dictatorship in Indonesia.

“We are sorry that details of this banner are misunderstood other than their original purpose. We apologize for the injuries caused in this context,” it said.

But in a statement posted on the show's website late Thursday, fellow Indonesian art collective Ruangrupa, which curated the exhibition, said curators had “collectively failed to spot the figure in the work, which is a character that evokes classical stereotypes of antisemitism.”

“We acknowledge that this was our error,” it said, adding that the decision to remove the installation had been taken in consultation with the artists.

“We apologize for the disappointment, shame, frustration, betrayal, and shock this stereotype has caused the viewers and the whole team who has worked hard alongside us to make documenta fifteen a reality,” the group said.

It acknowledged that the incident followed months of debate about alleged antisemitism, which it and the show's organizers had strongly rejected.

Germany's president raised the issue during his speech at the show's opening Sunday, saying there were “limits” to what artists can do when they address political issues in a country still atoning for the Holocaust. His comments came before the Taring Padi banner was unveiled.

“This imagery, as we now fully understand, connects seamlessly to the most horrific episode of German history in which Jewish people were targeted and murdered on an unprecedented scale,” Ruangrupa said in its statement.

“It comes as a shock not only, but specifically, to the Jewish community in Kassel and in all of Germany which we consider as our allies and which still live under the trauma of the past and the continued presence of discrimination, prejudice and marginalization,” the group said. “It also is a shock to our friends, neighbors, and colleagues for whom the struggle against all forms of oppression and racism is an existential element of their political, social, and artistic vision.”

“We take this opportunity to educate ourselves further about the atrocious history and present of antisemitism and are shocked that this figure made it into the work in question,” it said.

Many of the documenta's exhibits address issues of colonialism from the perspective of the global South.