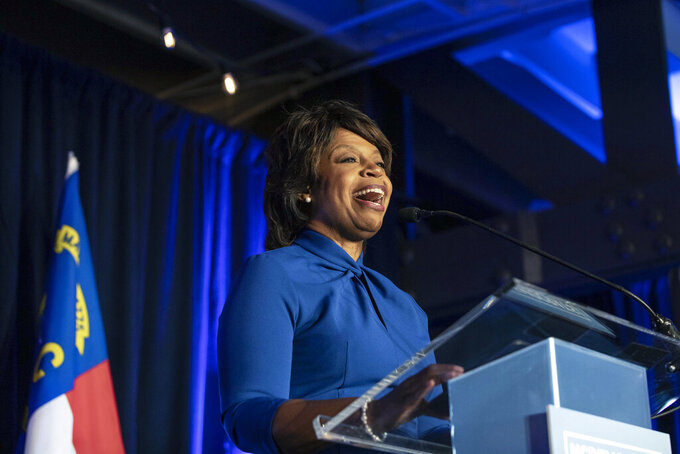 Their election victories came as North Carolina voters whittled down Democratic and Republican candidates seeking to serve on Capitol Hill, in the General Assembly and on the judicial bench.

Trump, who narrowly won the state's electoral votes in 2016 and 2020, gave his endorsement to Budd nearly a year ago. Budd benefitted from millions of dollars spent by the Club for Growth Action super PAC that was used to praise him and brand McCrory as too liberal.

McCrory and Walker criticized Budd for failing to participate in televised debates and accused the super PAC of trying to buy an election for Budd.

McCrory, a moderate within the state GOP, signed laws while governor that cut taxes and extended abortion waiting periods to 72 hours. He's best known nationally for signing a “bathroom bill” that restricted access for transgender people in 2016 and cost the state billions.

Beasley's path to the nomination widened after two rivals left the race last fall. Beasley, who would be the first Black senator elected from North Carolina, has consistently been the largest fundraiser in both primary fields.

Primaries were held in 13 of the 14 North Carolina U.S. House districts. Six of the seven incumbents seeking reelection this year and who faced challenges within their own party won on Tuesday.

Edwards will take on in November LGBTQ activist and local elected official Jasmine Beach-Ferrara, who won the Democratic nomination for the 11th District.

Redistricting in rural or slow-growth areas meant four pairs of Republicans are competing against each other in General Assembly primaries.

In Cumberland County, Democratic Sen. Kirk DeViere lost in a three-way race to Fayetteville City Council member Val Applewhite, who had been endorsed by Democratic Gov. Roy Cooper. DeViere had been accused of getting too comfortable with the GOP, especially during last year's budget negotiations.

There were three Republican appellate court primaries — one for a Supreme Court seat and two for the Court of Appeals.

And voters chose Trey Allen to compete in the fall against Associate Justice Sam Ervin IV, a Democrat. Allen, the general counsel at the Administrative Office of the Courts, defeated sitting Court of Appeals Judge April Wood and Greensboro attorney Victoria Prince.