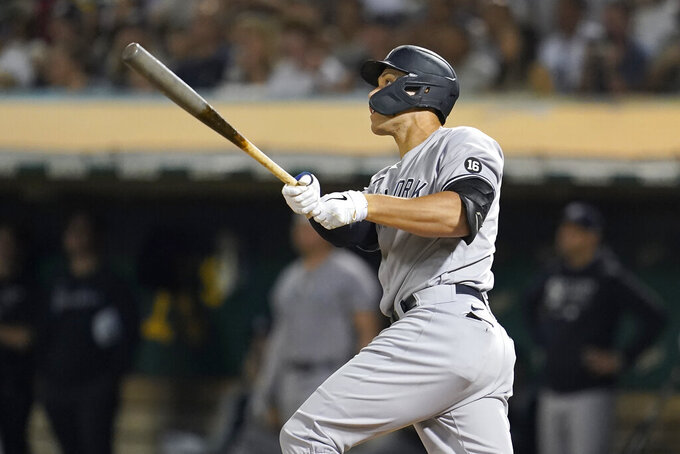 OAKLAND, Calif. (AP) — Night after night during this memorable winning streak, Aaron Boone is asked about what's going so well for his Yankees. He keeps coming back to the balance of production from everybody.

New York provided another impressive example of exactly that.

Giancarlo Stanton homered for a fourth straight game, Aaron Judge hit a three-run shot in front of friends and family, and the Yankees extended their best winning streak in nearly 60 years to 13 by slugging past the Oakland Athletics 8-2 on Friday night.

“I would just say the focus in that room, the purpose in that room is what you want it to be,” Boone said. “I go back to what I’ve said, I think the best part about it is the many contributions we’re getting from the entire roster.”

Stanton's 25th homer was crushed an estimated 472 feet above a suite level into the second deck of left-center, one of the longer drives at the Coliseum in recent memory. It gave Stanton six homers in his last nine games, and Luke Voit connected one out later in the fourth.

Gerrit Cole (13-6) struck out nine with two walks over six scoreless innings, allowing six hits to win his third straight start. Working on an extra day of rest, he reached 200 strikeouts for the fourth time in his career.

“Any time you can push the record books with this organization, it’s probably something special,” Cole said, noting there has been some good fortune involved, too. “But there’s a lot left out there for us to be desired so we’ve got to just keep plugging away.”

Judge's 28th homer chased A's starter Sean Manaea, who became frustrated before he even threw his first pitch when umpires checked his glove and he had to swap it out. The pitcher tossed the mitt into the dugout as fellow starter Cole Irvin hustled to retrieve a spare glove from the clubhouse.

Manaea believed the issue was that his light green glove had faded over the year and may have been too close in color to the basesball.

“That was completely uncalled for in my opinion,” manager Bob Melvin said. “He's using it the whole year. We see different color gloves. It went from a green glove to a green glove. Waits 'til he throws all his warmup pitches then makes him take his glove off.”

The game drew 22,463 on a night a Star Wars-themed drone show played postgame.

Judge, who grew up in the tiny Central Valley town of Linden, expected some 30-40 fans in the seats behind the Yankees dugout.

The slugger chatted pregame with former A's lefty Dallas Braden, who like Judge takes pride in his similar Stockton roots.

“He's a 209er,” Braden said of the 6-foot-7 star, referencing their area code. “He stands as tall as the corn stalks in Linden.”

Judge added an RBI single in the ninth and had three hits and four RBIs.

With his next victory, Boone will tie Buck Showalter (313) for ninth place on the Yankees’ all-time managerial wins list.

Yankees: SS Gleyber Torres (sprained left thumb) is on target to begin a rehab assignment Sunday. ... RHP Luis Severino, who had Tommy John surgery in late February 2020, played catch out to 60-70 feet in New York after being cleared to resume his throwing program. ... RHP Michael King, dealing with a bruised middle finger on his pitching hand, threw 20 pitches at Double-A Somerset and is close to beginning a rehab assignment.

Athletics: OF Seth Brown tested positive for COVID-19 and went on the injured list. He is experiencing symptoms. Contract tracing produced no immediate concerns for further positive tests. ... The A's recalled RHP Daulton Jefferies from Triple-A Las Vegas. ... RF Stephen Piscotty had season-ending left wrist surgery to stabilize a ligament to the bone. Piscotty will be in a splint for six weeks. The hope is he will be ready for the start of spring training. ... RHP Chris Bassitt returned to the Bay Area on Friday following facial surgery in Chicago, where he was hit with a line drive last week. The operation repaired the pitcher’s cheekbone that was fractured in three places. His right eye is open again and Bassitt will be re-evaluated early next week by a local optometrist and plastic surgeon, according to athletic trainer Nick Paparesta. ... RHP Mike Fiers threw a 20-pitch bullpen session of all fastballs in his first time throwing off a mound as he works back from a sprained pitching elbow. He is scheduled again for Tuesday.

LHP Nestor Cortes (2-1, 2.56 ERA) pitches Saturday on seven days' rest for the Yankees opposite RHP Frankie Montas (9-9, 3.84), winless over his last four starts since a road win against the Angels on July 29.