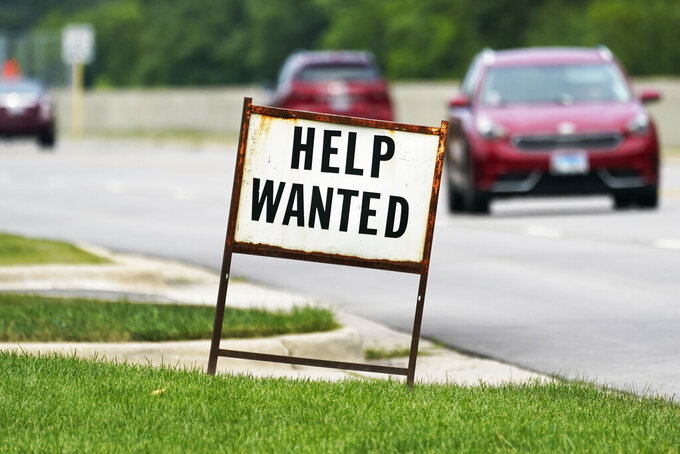 Nam Y. Huh, ASSOCIATED PRESS
FILE - In this Tuesday, July 27, 2021, file photo, a help-wanted sign is displayed at a gas station in Mount Prospect, Ill. The gulf between record job openings and a lack of people taking those jobs is forcing Wall Street to reassess the pace of the economic recovery. (AP Photo/Nam Y. Huh, File)

The gulf between record job openings and a lack of people taking those jobs is forcing Wall Street to reassess the pace of the economic recovery.

Jobs were gutted during the pandemic and employment growth has been a closely watched gauge for investors. Increasing employment eventually results in increased consumer spending, which is the biggest driver of economic growth. Without the former, analysts have said, it will take longer than expected for the economy to operate at some semblance of a pre-pandemic normal.

Typically, the gap is much wider the other way, with more people unemployed then there are job openings.

Rising COVID-19 cases are one of the biggest culprits driving the jobs divide. People are hesitant to head back to work because of health concerns as the highly contagious delta variant spreads, analysts have said. Many are also concerned about childcare as schools open for a new year with a high level of unpredictability because of the virus.

More than 22 million jobs were lost through March and April of 2020 when the pandemic prompted widespread business shutdowns. Roughly 16.8 million of those jobs have returned through July of 2021 in a seemingly swift recovery, but the employment crisis still remains more severe than the recessions of 1974, 1981, 1990 and 2001 were at their worst, according to Ross Mayfield, investment strategist at Baird.

“The developments in the labor market are among the more important in the world today,” Mayfield said, in a note to investors. “A lagging recovery will keep the Federal Reserve on the sidelines, but also limit economic growth.”

The Federal Reserve is also closely watching the recovery in the jobs market. The central bank has made it a priority to maintain its policy to keep interest rates low until it is satisfied with the jobs recovery. That has left investors torn between balancing the benefit of a sluggish jobs recovery that prolongs low interest rates with the damage to longer term growth if the economy continues struggling to make a full recovery.

The inability to get back to some semblance of a full staff means that many companies, particularly in the services sector, can’t take full advantage of increases in consumer demand. Hotels, for example, have trouble meeting any increase in demand if they don’t have the full staff to service paying guests.

The divide between job openings and people taking those jobs has also prompted companies to raise wages and offer bonuses. Those higher wages have raised concerns from analysts that wage inflation could add to already increasing inflation and crimp the broader recovery.

“Lots of firms are coming out and we’re starting to see some bearish forecasts,” said Katie Nixon, chief investment officer at Northern Trust Wealth Management. “We’re now seeing some strategists sort of take their foot off the accelerator.”