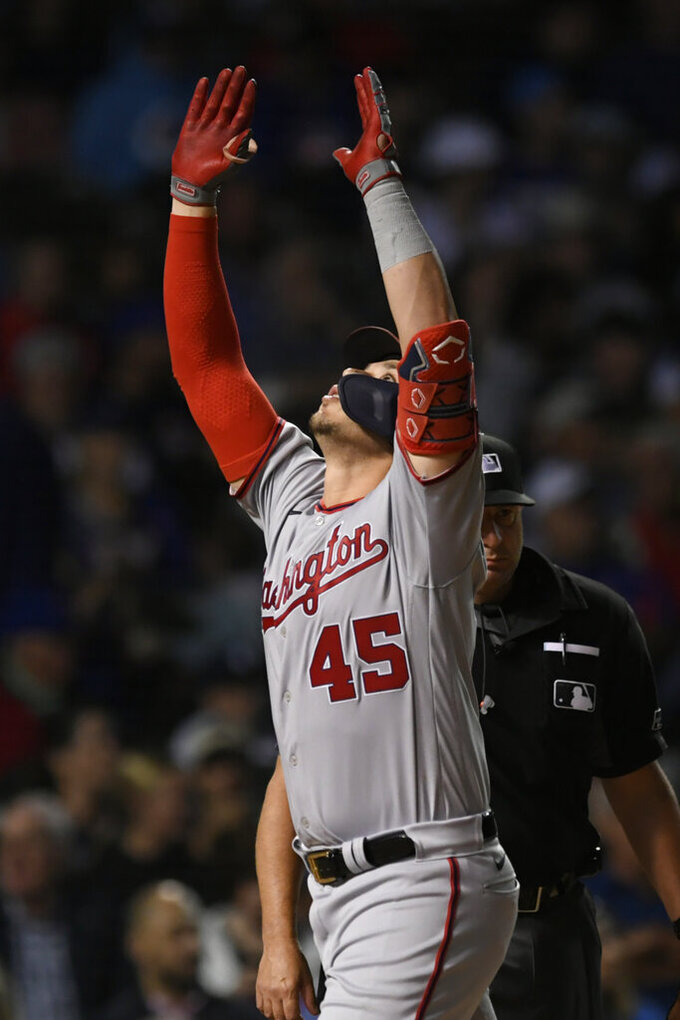 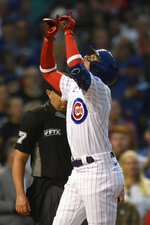 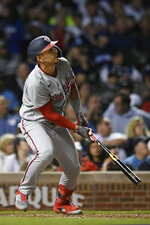 Thompson (9-5) didn’t walk a batter for the second time in three starts while scattering five hits over six innings. Luke Voit hit a homer with one out in the sixth to end Thompson’s shutout bid.

Thompson has posted a 6-2 record and 2.40 ERA in eight starts at Wrigley Field. Cubs starting pitchers have posted a 2.87 ERA and nine quality starts in 19 games since July 16.

Velázquez’s homer highlighted the first three-hit game of his career.

“It feels amazing,” Velázquez said. “A dream come true, my first home run at Wrigley Field. First at-bat, get the lead for the team, feels incredible.

“I did hit the ball pretty hard. I didn’t know it was going to be a homer, that’s why I started running hard.”

The Cubs (44-64) won for the third time in four games. The Nationals (36-75) dropped their sixth straight game and have been outscored 51-20 during that span.

Anibal Sanchez (0-5) pitched five-plus innings, the longest outing by a Nationals starter during their losing streak. But Sanchez was pulled after surrendering singles to Seiya Suzuki and Patrick Wisdom to start the sixth. Nico Hoerner then hit reliever Steve Cishek’s first pitch for a single to center field to score Suzuki.

Sanchez retired the first six batters before Velázquez homered to left against a stiff wind. Following the first of two walks to Nick Madrigal, Morel smacked a two-run shot into the left field bleachers. It was his 10th of the season and his first since July 7 at Dodger Stadium.

“A lot of it has to do with getting behind hitters, and having to throw strikes,” Nationals manager Davey Martinez said of Sanchez’s penchant for allowing homers. “We’ve got to start working ahead of hitters. We’ve been doing that really well. And put guys ahead in counts. When Anibal does that, he’s really good. He can mix things up and get guys off-balance. When he’s behind, he’s got to get more in the strike zone.”

Morel, nursing a tight right hamstring, made his second start at third base. He committed a throwing error that placed runners at second and third with two out in the seventh, but reliever Michael Rucker struck out Victor Robles to end the threat.

The Cubs capitalized in the bottom of the inning as Willson Contreras hit an RBI single, and Suzuki hit a sacrifice fly.

That loomed larger as pinch-hitter Joey Meneses hit a two-run homer off Cubs left-handed reliever Brandon Hughes with two out in the eighth. Hughes had allowed one earned run in his 13 previous innings prior to Meneses’ homer.

Rowan Wick pitched a scoreless ninth to earn his fifth save in seven chances.

The Cubs claimed OF Franmil Reyes off waivers from the Guardians with the hope he can regain his power stroke and help a feeble offense. Reyes, 27, hit a career-high 37 home runs with the Padres and Guardians in 2019 and produced 30 homers and 85 RBIs with the Guardians last season. Reyes, however, batted only .213 with nine home runs and 28 RBIs in 70 games before he was optioned to Triple-A Columbus on Aug. 2 and designated for assignment Saturday. “We have him under control for a couple years, and we’re lacking in the power department,” said Jed Hoyer, Cubs President of Baseball Operations. “For the whole year we’ve done a good job getting on base, but we’ve done a poor job of converting that into runs. Some of that is hitting the ball on the ground, some of that is the lack of power.” The Cubs rank 10th in the NL with 106 homers. First baseman Frank Schwindel was optioned after Monday’s game to make room for Reyes.

Cubs: The Cubs are awaiting results of an MRI on RHP Kyle Hendricks (right shoulder strain) that could dictate whether he pitches again this season. “The most important thing for us is he gets healthy for next year,” Hoyer said. “I’d love it if he pitches again this year, but I wouldn’t want to push anything to do so.” Hendricks hasn’t pitched since July 5. … LHP Wade Miley (left shoulder strain) is expected to start a minor league rehab assignment later this week, manager David Ross said.

The Nationals will send RHP Paolo Espino (0-4, 4.20) to the mound Tuesday night against the Cubs. Espino allowed five runs in four innings in a 5-4 loss Thursday to the Phillies. The Cubs will counter with RHP Marcus Stroman (3-5, 4.00), who allowed three runs in 6 2/3 innings Thursday in a 4-3 loss to the Cardinals.