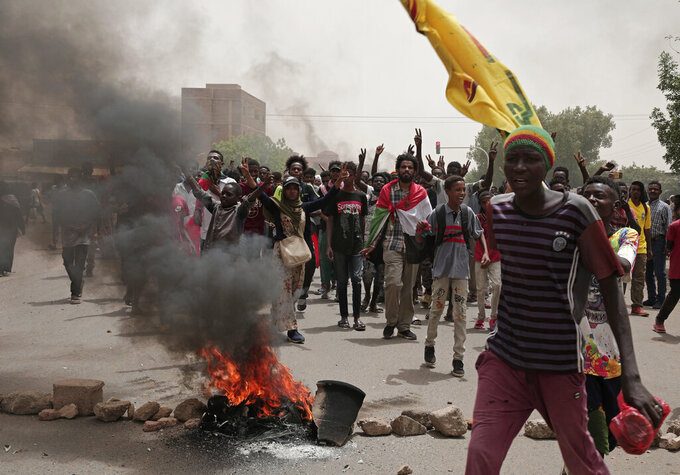 Marwan Ali, ASSOCIATED PRESS
Sudanese men burn tires during a demonstration to commemorate the third anniversary of a deadly crackdown carried out by security forces on protesters during a sit-in outside the army headquarters, in Khartoum, Sudan, Friday, June 3, 2022. Talks aiming at ending Sudan’s ongoing political deadlock began Wednesday, June 8, 2022, the United Nations said, although the country's main pro-democracy alliance is boycotting them over a continued police crackdown on those protesting last October's military coup. (AP Photo/ Marwan Ali)

The joint peace effort is brokered by the U.N. political mission in Sudan, the African Union, and the eight-nation east African regional group Intergovernmental Authority in Development. The effort aims to bring the generals and an array of political and protest groups to the negotiating table.

The military’s takeover has upended Sudan’s short-lived fragile democratic transition and plunged the East African nation into turmoil. Sudan had been transiting to democracy after nearly three decades of repression and international isolation under Islamist-backed strongman Omar al-Bashir. A popular uprising pushed the military to remove al-Bashir in April 2019.

The U.N. envoy for Sudan, Volker Perthes, said the process would discuss a “transitional program,” including the appointment of a civilian prime minister and arrangements for drafting a permeant constitution and elections at the end of the transition.

Gen. Abdel-Fattah Burhan, the leader of the coup who also heads the ruling sovereign council, welcomed the talks as a “historic opportunity to complete the transitional phase.”

In a speech to the nation late Tuesday, he urged all factions to take part in the talks, vowing that the military will implement their outcome. “We are fully committed to work with everybody to end the transitional period as soon as possible with fair and transparent elections,” he said.

Ahead of the talks, U.S. Assistant Secretary of State for African Affairs Molly Phee visited Sudan earlier this week and met with military and civilian leaders in Khartoum to support the negotiating process. She urged all parties to join the talks to “achieve a civilian-led path towards democracy for Sudan.”

However, the Forces for the Declaration of Freedom and Change — an alliance of political parties and protest groups — is boycotting the meeting, in a blow to the process.

The alliance says the talks should lead to “a civilian democratic authority" and criticized the participation of pro-military groups and Islamists who had been allied with al-Bashir's government. It also seeks the the release of coup-related detainees, and the ending of violence against protesters.

Two activists said the U.N., the United States and other Western governments were pressuring the pro-democracy alliance to send representatives to the talks.

Some factions within the alliance favor participation as “the best possible option,” given the international support for the talks, they said, but hard-liners, including the influential Communist Party, reject the entire process and demand immediate handover of power to civilians. The activists spoke on condition of anonymity to discuss internal deliberations.

The talks come as the violent crackdown on anti-coup protests continued in Khartoum. A 5-year-old girl was killed Tuesday, when a police vehicle ran her over while chasing protesters. That brought the total deaths among protesters since October to at least 101, according to a medical group tracking the casualties.

The coup has triggered near-daily street protests, which authorities have met with a deadly crackdown. Hundreds of people, including prominent politicians and activists, have been detained, although many have been released recently as part of trust-building measures.