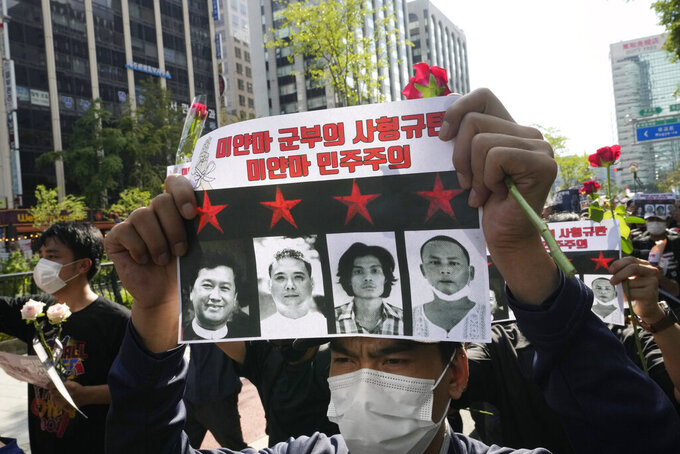 Ahn Young-joon, ASSOCIATED PRESS
FILE - A Myanmar national living in South Korea attends a march to condemn Myanmar's recent executions of activists, at the down town in Seoul, South Korea, Saturday, July 30, 2022. The signs read: "We condemns the executions of the Myanmar military." Recent executions of four democracy activists in Myanmar have reenergized efforts to get the U.S. and other countries to impose further sanctions against military leaders who ousted its elected government early last year. (AP Photo/Ahn Young-joon, File)

BANGKOK (AP) — Recent executions of four democracy activists in Myanmar have reenergized efforts to get the United States and other countries to impose further sanctions against military leaders who ousted an elected government early last year.

Human rights advocates and comments by U.S. lawmakers suggest the Senate is inching toward passage of the Burma Act, legislation already passed by the House of Representatives. Among other actions, it would pave the way for sanctions on Myanmar Oil and Gas Enterprise, or MOGE, a state-controlled company that is a vital source of hard cash for the impoverished nation.

That makes MOGE a key target in the push to cut off funding for the military’s efforts to quash a widespread public backlash against its February 2021 seizure of power.

Myanmar, also called Burma, has been ruled by the military for most of the past 70 years. The army’s takeover interrupted a gradual transition toward democratic civilian government and a more modern, open economy and resulted in a slew of sanctions against the military, which controls many industries, army family members and cronies.

The hangings in late July of four political activists prompted condemnation and stronger calls from U.S. lawmakers and others f or Myanmar’s neighbors, especially the 10-member Association of Southeast Asian Nations, to exert more pressure on the country’s military rulers.

“It is time for them to impose meaningful consequences on the junta in Burma that is literally getting away with murder,” Senate Minority Leader Mitch McConnell, a supporter of ousted Myanmar civilian leader Aung San Suu Kyi, said in a recent statement. If Myanmar’s neighbors and ASEAN won’t do more, the U.S. should “turn up the heat” on the army and its sources of financial support, he said.

“This should include sanctions on Myanmar Oil and Gas Enterprise,” McConnell said.

In February, the European Union announced sanctions against MOGE, saying the military’s control means the company is “contributing to its capabilities to carry out activities undermining democracy and the rule of law in Myanmar/Burma.”

Two of the other biggest Myanmar state companies, Myanma Economic Holdings Ltd. and Myanmar Economic Corp., already have been designated for U.S. sanctions.

Advocates of sanctions say they could make a difference if they are well-targeted and enforced. So far, Myanmar's economy has been insulated somewhat from the penalties imposed by the U.S. and other Western governments after the military takeover. Most of its trade — especially lucrative sales of gems, rare earths and timber — is with nearby countries, especially China, which has been signaling growing support for the military-controlled government. Most big Western energy companies already have pulled out of oil and gas projects in the country.

That leaves only financial levers. Exports of oil and gas to China and Thailand earn about $2 billion a year, according to reports in its state media, and are a key source of the foreign exchange Myanmar needs to pay for imports of all kinds, including weapons used to fight opposition forces who took up arms after the army crushed peaceful protests.

The EU sanctions led the Bank of China to advise operators of the Shwe oil and gas field in northwestern Myanmar that it will not handle payments in euros to MOGE out of concern they might fall afoul of those restrictions, according to activists briefed by two of the companies operating the project, Posco International and Kogas. Two other people familiar with the situation confirmed that euro payments to MOGE were being kept in escrow accounts. The people spoke on condition they not be identified out of concern over risks for themselves, family members and associates.

The billions that other global banks have paid for violating sanctions against other countries are a strong incentive for compliance.

The EU, in announcing its sanctions, said that since MOGE was controlled by and generates revenue for the military, it was “contributing to its capabilities to carry out activities undermining democracy and the rule of law in Myanmar/Burma."

A 770 kilometer (475 mile) pipeline connects the Shwe field to China’s Yunnan province. It is the only major project whose contracts call for revenue from gas sales to be paid in euros, rather than U.S. dollars.

A spokesman for Posco International, which has a 51% stake in the project, confirmed that those revenues were being paid into an escrow account. Posco is being paid its share as normal, Song Chan, the spokesman, said in an emailed reply to questions. He said he could not comment on the status of payments to the other companies participating in the oil and gas pipeline.

Otherwise, the project was operating as normal, he said, referring further questions to China National United Oil Co., which buys gas from the Shwe project and pays sales revenue. That company, a subsidiary of state-owned China National Petroleum Corp., did not immediately respond to a request for comment. Neither did CNPC nor the Bank of China.

Korea Gas Corp., which has an 8.5% stake in the Shwe fields, did not reply to a request for comment.

The fact that the Shwe project has continued to send gas to China suggests that sanctions can be implemented without disrupting livelihoods or supplies of natural gas in Myanmar, said Keel Dietz, a policy adviser at the environmental non-profit Global Witness.

Critics of sanctions have often contended that they might harm employees of companies involved in the projects or worsen power shortages in the country. The Burma Act itself calls for assessing the potential impact of any sanctions against MOGE on people in Myanmar. The president could impose such sanctions if they would hinder abuses by Myanmar's military after ensuring they would be in the U.S. national interest, with benefits outweighing any harm.

Even though the EU sanctions, imposed in February, have only affected the Shwe project, “it’s clear that EU sanctions had a meaningful impact on the thinking of at least one bank in a way that at the very least has raised costs for the junta in accessing their money," Dietz said. “All of this was done with zero negative humanitarian impacts in Myanmar and Thailand."

A lack of impact on gas supplies to Thailand from other projects would alleviate concerns that U.S. sanctions against MOGE might harm relations with Bangkok.

The executions that Myanmar carried out recently have deepened frustrations for its neighbors. Human rights advocates say dozens of democracy activists remain on Myanmar’s death row.

“If more executions are conducted, then things will have to be reconsidered,” said Prak Sokhonn, Cambodia's foreign minister and ASEAN's special envoy for Myanmar.

Outside ASEAN, the countries with closest ties and most sway over Myanmar, China and Russia, have signaled support for the military and are unlikely to do much to apply pressure.

The nine other ASEAN members are waiting to see what happens in coming months ahead of an annual summit meeting in November, Malaysian Foreign Minister Saifuddin Abdullah told reporters in Bangkok last week.

Saifuddin acknowledged that ASEAN countries, which tend to refrain from imposing economic sanctions against other members, are discussing that option as they search for ways to exert leverage on Myanmar's military leaders.

“We did discuss this measure, but there was no conclusion," Saifuddin said.