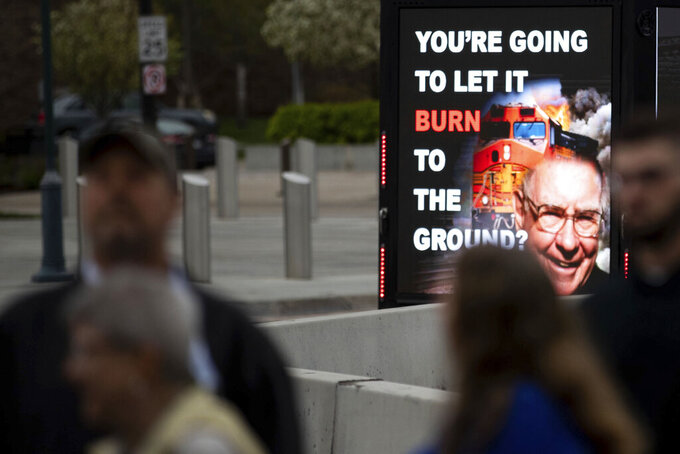 OMAHA, Neb. (AP) — BNSF railroad is tweaking its strict new attendance policy that upset workers, but the unions that challenged the rules since they took effect in February say the changes don't go far enough.

The railroad has told employees that starting next month it will make several small changes in the formula it uses to determine whether workers are missing too many shifts.

The unions say the rules still do too much to encourage workers to show up when they are sick or fatigued. They also argue the rules have contributed to more than 700 employees leaving the railroad at a time when BNSF is struggling to hire.

BNSF's two largest unions that represent nearly half the railroad's 35,000 workers — the Brotherhood of Locomotive Engineers and Trainmen, and the Transportation Division of the International Association of Sheet Metal, Air, Rail, and Transportation union — have both been fighting the policy since it was announced. A federal judge ruled earlier this year they couldn't strike over the issue so they are now trying to address their concerns through arbitration.

“BNSF Railway’s newly announced changes to its Hi-Viz attendance policy are little more than fluff,” BLET President Dennis Pierce said. “Hi-Viz has been an abject failure. This unreasonable policy which keeps locomotive engineers and other railroaders on call day after day, around the clock, has caused hundreds of BNSF’s employees to quit and it has made recruitment of new employees a nightmare.”

The railroad has said the policy is helping make sure it has the workers it needs to operate its trains available. BNSF said Monday that the railroad has actually seen an increase in the number of vacation and personal days employees have taken since the policy took effect.

And the rules haven’t kept the railroad from hiring, which it has made a priority to help eliminate widespread delays that shippers have been complaining about this spring.

“We currently have more train crew employees today than we did a year ago, coupled with a robust 2022 hiring plan that already has 300 new employees currently being trained,” BNSF said.

Under the new policy, engineers and conductors begin with 30 points, and then points are deducted from that for absences, with the deductions ranging from two points to 25 points. A worker can earn four points back by being available to work for 14 days in a row including weekends. An employee would be disciplined when their points are exhausted.

Now the railroad plans to offer seven bonus points to workers who log the most hours in a month. Workers will also receive one extra point if they remain available to work right before or after planned vacations, show up on holidays and other in-demand days or if they have to report to work between Friday afternoon and midday Saturday.

The head of the Transportation Trades Department union coalition that includes BLET, SMART-TD and several other rail unions said the tweaks BNSF is making don’t change the overall effect of the policy because earning an extra point or two won’t offset provisions like the 15-point deduction for being unable to work on a holiday.

“BNSF’s proposed changes to its Hi Viz attendance policy are unimpressive. These changes do nothing to address the policy’s fundamental flaws,” said TTD President Greg Regan.

BNSF, which is based in Fort Worth, Texas, is one of the largest railroads in the United States, and it operates 32,500 miles (52,300 kilometers) of track in 28 western states. It is owned by Warren Buffett's Omaha, Nebraska-based Berkshire Hathaway conglomerate, and dozens of railroad workers recently demonstrated outside Berkshire's annual meeting because of their concerns about the attendance rules.