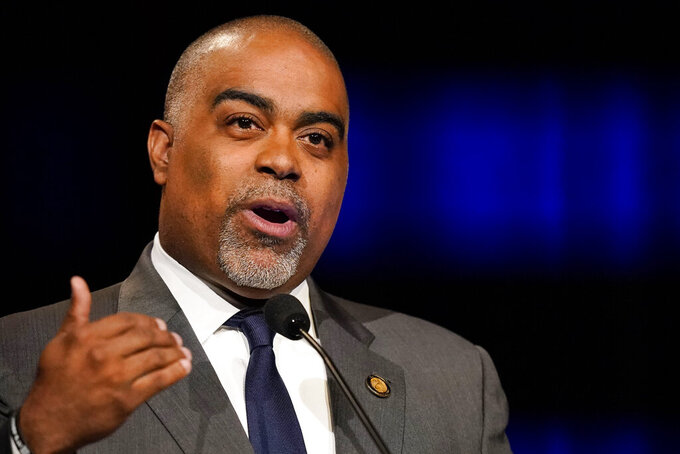 ATLANTA (AP) — Butch Miller continues to press attacks on Burt Jones as the two Republican state senators compete for their party's lieutenant governor nomination, while a fleet of nine Democrats are trying to stand out in their party's crowded race.

The prize is a statewide office that presides over the Senate but comes with little power. Lieutenant governors in Georgia only have as much influence as the 56 state senators give them.

The seat is open because Lt. Gov. Geoff Duncan, a Republican, is not seeking another term after staking out a position that calls for his party to abandon Donald Trump and refocus.

Trump, though, is involved in trying to select Duncan's replacement, endorsing Jones, a Jackson Republican who unsuccessfully pushed for a special session after Trump's loss to Democrat Joe Biden in Georgia in 2020. Besides Miller, Republicans Mack McGregor of LaFayette and Jeanne Seaver of Savannah are also running in the May 24 GOP primary.

Jones said Tuesday during an Atlanta Press Club debate that he wanted to invalidate a settlement agreement that standardized how signatures on absentee ballots were verified, and eliminate drop boxes. He also remarked that he wants to "investigate all the allegations that were going on, particularly in Fulton County, where they were significant.” Jones did not answer whether he would have ultimately sought to award Georgia's electoral votes to Trump if Gov. Brian Kemp had not refused to call the session, but his platform calls for a statewide investigation into the 2020 election.

Jones also said he wants to eliminate the state income tax and expand voucher programs so that parents can pay for private schools or homeschooling with state money.

Miller, of Gainesville, spent much of the session pressing conservative issues that aid his candidacy, including his own school voucher bill and income tax abolition measure, as well as a measure to ban transgender girls from playing high school sports. Of those measures, a watered-down version of the transgender sports ban, letting the Georgia High School Association decide the issue, became law.

“You’re complaining and whining and I’m doing something," Miller said to Jones. "That’s been our history in the state Senate for many years.”

Miller has attacked Jones for voting to raise water and sewer rates as a member of the Butts County water and sewer board. He also noted that Jones was fined $1,000 by the state ethics commission and had to reimburse his state Senate campaign $8,000 for using money from that account to shoot video for his lieutenant governor's campaign.

Both candidates have also launched attacks against Charlie Bailey, who jumped into the race after initially announcing for attorney general again.

“This is the job I want,” Bailey said Tuesday, explaining that it is the position that would best enable him to influence issues such as health care and education.

Shannon is the only woman in the field, and might be its most liberal member. She gained some prominence in 2019, when she gave an impassioned speech against a six-week abortion ban that Republicans pushed through the General Assembly. Shannon, speaking against the bill and about her own past abortion, went over her allotted time but refused to give up the microphone. Colleagues eventually persuaded her to yield.

Shannon called for Georgia to enshrine abortion rights in state law Tuesday, a day after the leak of a draft Supreme Court opinion suggesting the court’s conservative majority is poised to overturn the landmark 1973 decision establishing a nationwide right to abortion.

“Reproductive freedom should have never been left up to the courts," Shannon said. “And it is something that we need to codify in law.”

That’s unlikely with Republican majorities, and many GOP candidates want a no-exceptions ban on the procedure.

Other Democrats also support abortion rights, in the same way that they support expanding Medicaid to cover low-income adults, enhancing education and pushing back on Republican changes to voting laws. Allen and some others argue that they would be the most effective in helping Democrat Stacey Abrams, if she became governor, to push bills through what will likely be a Republican-controlled Senate.