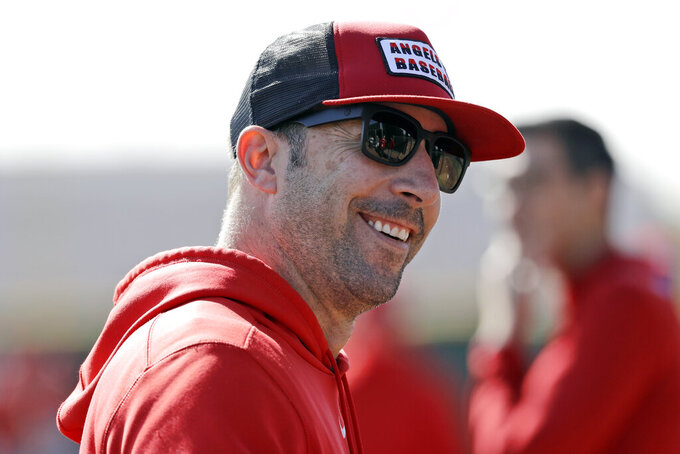 Darron Cummings, ASSOCIATED PRESS
FILE - Los Angeles Angels general manager Billy Eppler watches during spring training baseball practice on Feb. 17, 2020, in Tempe, Ariz. The New York Mets were close to completing a deal Wednesday night, Nov. 17, 2021, to hire Eppler as general manager, according to a person familiar with the negotiations. Eppler and the Mets were nearing a four-year contract, said the person, who spoke on condition of anonymity because the agreement was not finalized. (AP Photo/Darron Cummings, File)

NEW YORK (AP) — The New York Mets were close to completing a deal Wednesday night to hire Billy Eppler as general manager, according to a person familiar with the negotiations.

Eppler and the Mets were nearing a four-year contract, said the person, who spoke on condition of anonymity because the agreement was not finalized.

New York was completing a background check on Eppler, fired as general manager of the Los Angeles Angels a little more than a year ago after five unsuccessful seasons. But it appears the Mets have finally found their GM following a ridiculed search that had dragged on for more than six weeks since the 2021 season ended.

Eppler is expected to be introduced by the team Friday, and he would become the Mets' fifth head of baseball operations in 13 months. With an uncertain offseason already underway, his return to New York would mark a major step toward restoring stability in the front-office structure under owner Steve Cohen and team president Sandy Alderson.

The 46-year-old Eppler was GM of the Angels from 2015-20, overseeing five straight losing seasons. The team went 332-376 (.469) under three managers, with a rotating cast of supporting players around Mike Trout and Albert Pujols.

Unable to provide enough pitching, an aggressive Eppler did land some big fish for Los Angeles with the help of owner Arte Moreno's checkbook. He lured two-way sensation Shohei Ohtani to the Angels and signed free agent third baseman Anthony Rendon to a $245 million, seven-year contract. Trout got a $426.5 million, 12-year deal.

“One of the most honest people I’ve met in this industry. Great talent evaluator,” Angels manager Joe Maddon said of Eppler at the end of the pandemic-shortened 2020 season. “I’m certain he’s going to land firmly on his feet.”

Before all that, Eppler cut his teeth as a rising star in the New York Yankees' front office. He was director of professional scouting from 2006-11, and an assistant GM under Brian Cashman from 2012-14.

Eppler would surely be busy right off the bat with the Mets, who have 11 remaining free agents. The group includes infielder Javy Báez and starting pitcher Marcus Stroman. Right fielder Michael Conforto declined the team's $18.4 million qualifying offer Wednesday, and pitcher Noah Syndergaard left the Mets on Tuesday for a $21 million, one-year contract with the Angels.

Once their GM is in place to direct the search, the Mets also will turn their attention to picking a new manager after Luis Rojas was let go Oct. 4 following two losing seasons.

Rojas was hired across town Monday as the Yankees' new third base coach.

Alderson, who turns 74 next week, has been running baseball operations since acting GM Zack Scott was placed on paid leave following his arrest in late August on charges of drunken driving. He was fired Nov. 1.

Scott was promoted to the role in January when Jared Porter was fired after fewer than 40 days on the job following revelations he sent sexually explicit text messages and images to a female reporter in 2016 while working for the Chicago Cubs.

Porter and Scott were hired last offseason after Alderson and Cohen failed in their search for a president of baseball operations. The club hit a similar roadblock this offseason and pivoted to GM again.

Alderson said several candidates were unable to get permission from their current clubs to interview for the job, while others declined because they were too comfortable personally or professionally where they are.

He said he was a little surprised by how many candidates had turned down the Mets. Largely, though, he thought New York itself was keeping people away.

"I don’t want to give you a timeline,” Alderson said last week at the general managers' meetings in California. “We’ve already blown through what most people would say is a reasonable timeline.”

Alderson, whose son, Bryn, is an assistant general manager with the Mets, did not rule out the possibility that a president of baseball operations could be hired above the GM in a future offseason.

“Assuming we only hire one person, there will be at least a year runway for that person to demonstrate their ability and their potential,” Alderson said. “I’ve said this to others in the past — that’s the opportunity. That’s all you can ask for. And demonstrated ability tends to get rewarded.

Alderson joked at the GM meetings that he’d interviewed so many candidates for the Mets job that “probably half the people are going to be here today.”

Late-night talk show host Jimmy Kimmel also found humor in the situation, tweeting that “after much thought, I have decided to withdraw my name from consideration as GM of the @Mets.”