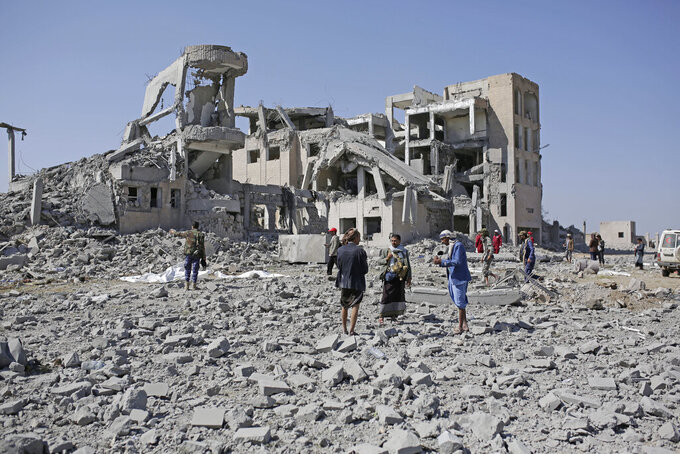 Hani Mohammed, ASSOCIATED PRESS
FILE - In this Sept. 1, 2019 file photo, bodies covered in plastic lie on the ground amid the rubble of a Houthi detention center destroyed by Saudi-led airstrikes, that killed at least 60 people, in Dhamar province, southwestern Yemen. A United Nations panel in a report presented to the Human Rights Council Wednesday, Sept. 8, 2021, said that at least 18,000 Yemeni civilians have been killed or injured by airstrikes since the country’s war escalated in 2015. The report said that Yemen has been subjected to some 10 airstrikes a day, a total of more than 23,000 since March 2015. The report found both sides of the war to have killed civilians, with the Saudi-led coalition having conducted airstrikes and their rivals the Houthis through shelling attacks. (AP Photo/Hani Mohammed, File)

CAIRO (AP) — A United Nations panel said Wednesday that at least 18,000 Yemeni civilians have been killed or wounded by airstrikes since the country’s war escalated in 2015.

In a report presented to the Human Rights Council, a group of experts named by the U.N. said that Yemen’s people have been subjected to some 10 airstrikes a day, a total of more than 23,000 since March 2015.

The report, which cited the Yemen Data Project for the airstrike figures, found both sides in the war to have violated international law. The project, a local data gathering operation, attributes all of the airstrikes to the Saudi-led coalition.

Meanwhile the coalition’s rivals, the Houthi rebels, have shelled neighborhoods, camps for the displaced, an airport and markets, leading to the deaths of dozens, according to the U.N. experts.

Yemen has been convulsed by civil war since 2014 when the Iran-backed Houthis took control of the capital of Sanaa and much of the northern part of the country, forcing the government of President Abed Rabbo Mansour Hadi to flee to the south, then to Saudi Arabia.

The Saudi-led coalition, backed at the time by the U.S., entered the war in March 2015 to try restore Hadi to power, and threw its support behind his internationally backed government. Despite a relentless air campaign and ground fighting, the war has deteriorated largely into a stalemate, also spawning the world’s worst humanitarian crisis. The U.S. has since suspended its direct involvement in the conflict.

Neither the Saudi-led coalition nor the Houthis immediately responded to requests for comment on the report. In the past, both have leveled charges at their opponents for bearing the greater responsibility for civilian deaths.

The true toll of the conflict remains in question, due to limited access to some of the remote areas in which it is conducted. In December 2020, the U.N.'s humanitarian body said that the war had caused more than 200,000 deaths, including more than 100,000 from indirect causes such as starvation and preventable causes due to lack of basic services. The Armed Conflict Location & Event Data Project, or ACLED, which collects conflict data internationally, says that the war has killed 144,620 people between 2015 and now.

The U.N. report pointed towards the airstrikes having been committed by the Saudi-led coalition, without directly accusing it.

The Houthis do not have a functional air force, but they have launched attacks by explosive-laden drones that have left causalities among civilians. They rely on ground-fired missiles and rockets, largely.

The group criticized the coalition for failing to share details of how it determined what would be the targets of certain attacks that resulted in the deaths of children and women. It also said the coalition’s own investigating body had found “technical error" to be responsible in cases of civilian death without any subsequent changes to operations.

Both sides were found to have made targets of key health facilities and food supply chain infrastructure.

Among the shelling incidents investigated was a December 2020 attack at Aden international airport that killed at least 25 people moments after a plane carrying new members of the internationally recognized government arrived. U.N. experts have previously said the attack could be fairly conclusively attributed to Houthi-fired rockets.

The U.N. report said the continued sale of weapons to both sides of the war has exacerbated the fighting. It said countries that have continued arms transfers to Yemen are Canada, France, Iran, the United Kingdom and the United States.