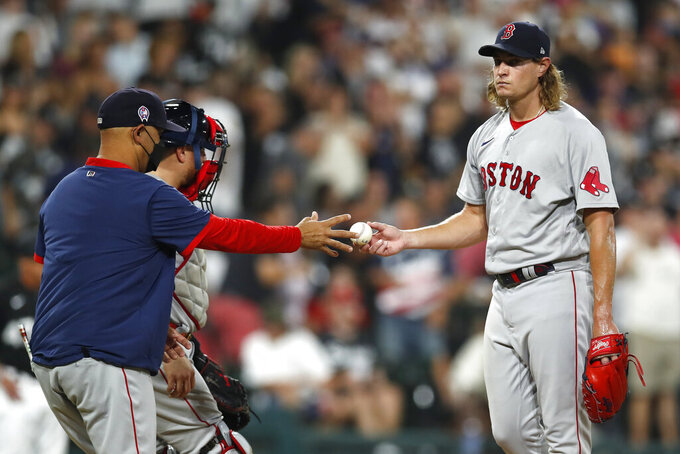 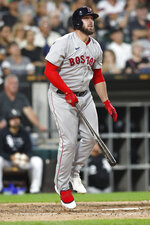 CHICAGO (AP) — Travis Shaw hit a tiebreaking single in the 10th inning after belting a three-run homer in the third and the Boston Red Sox beat the Chicago White Sox 9-8 on Saturday night.

Shaw found out toward the end of batting practice that he was going to be in the lineup with J.D. Martinez scratched because of back spasms. On short notice, he sure delivered.

Shaw capped a seven-run third with a drive that made it 7-2 and chased Chicago starter Dylan Cease.

The AL Central-leading White Sox tied it with five in the fourth and took an 8-7 lead in the fifth when Yasmani Grandal homered off Ryan Brasier. Boston tied it in the eighth on Enrique Hernández’s sacrifice fly against Craig Kimbrel.

Alex Verdugo started the 10th on second and moved up on Bobby Dalbec’s grounder to first. Shaw then lined a tiebreaking single to right against Mike Wright (0-1).

Grandal, playing his 1,000th game, singled leading off the bottom half against Josh Taylor to put runners on first and third. Leury García and Danny Mendick struck out before Brian Goodwin grounded out to end the game. Hernandez raced to his left to field the ball and Dalbec stayed on the bag as he stretched for the throw.

“That was a good one,” Red Sox manager Alex Cora said. “That clubhouse is loud today.”

Garrett Whitlock (8-3) worked two scoreless innings. Taylor earned his first career save, and the Red Sox came out on top after losing four of five.

Chicago’s Luis Robert had four hits, including a three-run double, and Garcia homered.

“Overall, it was a great game,” Grandal said. “It just happened that we ended up on the losing side. But a lot of times, these type of games are the ones that teach you the most — especially when you come up as the loser.”

Cease lasted 2 2/3 innings in his shortest start this year. He matched a season high by giving up seven runs and set one with five walks while allowing four hits and throwing 71 pitches.

Cease did join Chris Sale, Javier Vazquez, Esteban Loaiza and Lucas Giolito as the only White Sox pitchers with 200 strikeouts in a season, fanning five to give him 202. But that was about the only positive for him.

The Red Sox sent Brad Peacock to Triple-A Worcester with Seabold being recalled from the minor league club. Peacock made two appearances and one start, allowing nine runs in 5 1/3 innings, after being acquired from Cleveland on Aug. 30.

Red Sox: DH J.D. Martinez (back spasms) was scratched from the lineup for the second straight game and will likely be held out on Sunday, manager Alex Cora said. ... RHP Matt Barnes and LHP Martín Pérez are headed to rehab assignments with Worcester. Cora said Barnes will likely need two rehab outings, with Pérez making one or two. Both are on the COVID-19 list.

White Sox: Manager Tony La Russa said the White Sox will likely use RHP Reynaldo López as a sixth starter with LHP Carlos Rodón probably getting extended rest between outings. Rodón went five innings in Friday’s win — his first start since Sept. 1, after having his turn pushed back because of shoulder soreness.