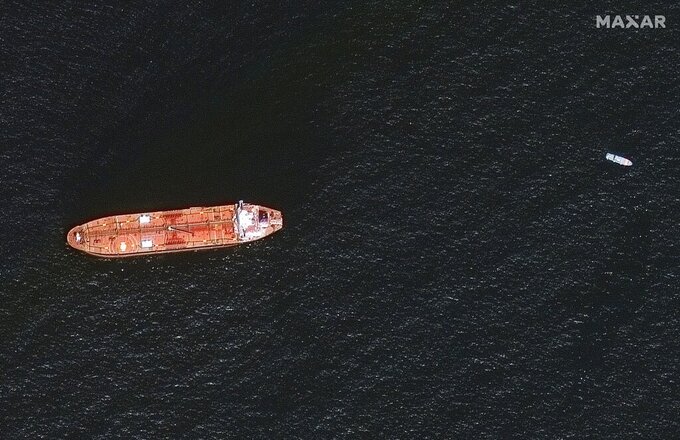 WASHINGTON (AP) — The U.S. military and the Group of Seven leading industrialized nations on Friday accused Iran of being behind last week’s deadly attack on an oil tanker in the Arabian Sea.

The U.S. Central Command said it had collected and analyzed substantial evidence that the July 29 attack on the HV Mercer Street in international waters in the Arabian Sea off the coast of Oman that killed two people was carried out by an Iranian drone loaded with a military-grade explosive.

“U.S. experts concluded based on the evidence that this UAV was produced in Iran,” it said, using the military term for an “unmanned aerial vehicle.”

Britain’s U.N. Ambassador Barbara Woodward identified the drone as a Shahed-136 UAV, telling reporters after the U.N. Security Council discussed the tanker attack behind closed doors that “these are manufactured only in Iran.”

Meanwhile, the foreign ministers of Britain, Canada, France, Germany, Italy, Japan and the United States said the attack was “a clear violation of international law.” They added that “all available evidence clearly points to Iran.” Iran has denied being involved.

She accused Israel of trying to divert world opinion from its “crimes and inhumane practices in the region,” claiming it has attacked over 10 commercial vessels in less than two years, threatening maritime security and disrupting freedom of navigation.

Israel’s defense minister threatened on Thursday to use force against Iran, and Ershadi responded Friday saying: "Iran will not hesitate to defend itself and secure its national interests.”

Central Command said the ship had been targeted by three drones but that the first two were unsuccessful. “The investigative team determined that the extensive damage to the Mercer Street ... was the result of a third UAV attack.”

It said the drone attack had caused an approximately 6-foot-diameter hole in the pilot house of the vessel and had badly damaged the interior. It said an analysis of the explosive concluded that the drone had been rigged “to cause injury and destruction.”

Left unsaid in the Central Command report was that the triangle-shaped Delta wing drones used in the Mercer Street attack were also used in 2019 strikes on the heart of the Saudi oil industry, which temporarily halved the kingdom’s production and sent markets spiking.

Yemen’s Iran-backed Houthi rebels claimed those attacks, but the distance from their territory to the two sites hit likely was too great for them to have launched the attacks, analysts and U.N. diplomats said. In January, Iran’s paramilitary Revolutionary Guard appeared to use the same kind of Delta drones in a drill aired on state television.

Friday’s military analysis was released concurrently with a statement from the G-7 foreign ministers condemning the attack that killed a Briton and a Romanian.

“We condemn the unlawful attack committed on a merchant vessel,” the foreign ministers said in a joint statement. “This was a deliberate and targeted attack, and a clear violation of international law.. All available evidence clearly points to Iran. There is no justification for this attack.”

The ship is managed by a firm owned by an Israeli billionaire, and Israel — along with the U.S. and Britain — had previously pointed the finger at Tehran.

In their statement, the G-7 countries said “Iran’s behavior, alongside its support to proxy forces and non-state armed actors, threatens international peace and security.”

“We call on Iran to stop all activities inconsistent with relevant U.N. Security Council resolutions, and call on all parties to play a constructive role in fostering regional stability and peace,” they said.

The ministers called for vessels in the region to be able to “navigate freely in accordance with international law.”

“We will continue to do our utmost to protect all shipping, upon which the global economy depends, so that it is able to operate freely and without being threatened by irresponsible and violent acts,” they added.

Woodward, Britain’s U.N. ambassador, asked about possible U.N. Security Council action, said “the door for diplomacy and dialogue remains open, but if Iran chooses not to take that route, then we would seek to hold Iran to account and apply a cost.”