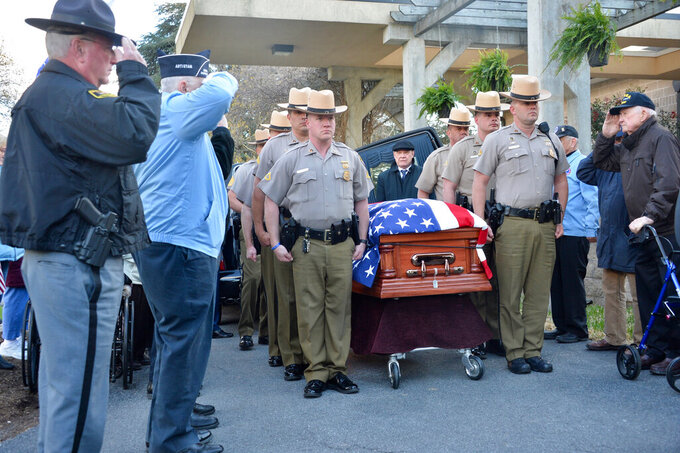 Julie E. Greene, ASSOCIATED PRESS
Veterans and authorities salute the late Sgt. Roy Charles DeLauter as the Maryland State Police stand by his casket after he arrived home in Washington County, Md., on Tuesday evening, April 19, 2021. After waiting 71 years for news of their brother and father, the family was notified in January that the missing Korean War veteran DeLauter’s remains had been identified using his relative's DNA. “I just thank God. I’m just happy to have him home. I prayed for this,” said Evelyn Eccard, 93, one of DeLauter’s three sisters. (Julie E. Greene/The Herald-Mail via AP)

A procession of family and authorities, including Maryland State Police, the Maryland Transportation Authority Police from BWI, Army officials, and the Maryland Patriot Guard Riders escorted the hearse carrying DeLauter from Baltimore-Washington International Thurgood Marshall Airport to Rest Haven Funeral Home and Cemetery. The plane departed Hawaii the day before.

“I just thank God. I’m just happy to have him home. I prayed for this,” said Evelyn Eccard, 93, one of DeLauter’s three sisters.

Sue Draper, DeLauter’s youngest daughter, said the day — with its honorary festivities and people standing at highway overpasses paying respect to her father — had been “amazing.”

“You couldn’t help but cry. Good tears,” said Draper, 73, of the Hagerstown area.

Draper was about 2 years old when her family received a telegram that Roy, 21, was missing in action.

After waiting 71 years for news of their brother and father, the family was notified in January that DeLauter’s remains had been identified using DNA from blood donated by Eccard and her sister, Margaret Carr.

His remains were among those contained in 55 boxes the Democratic People’s Republic of Korea returned to the U.S. in 2018, according to the Defense POW/MIA Accounting Agency, part of the U.S. Department of Defense.

DeLauter’s unit was on the east side of North Korea’s Chosin Reservoir on Nov. 27, 1950, “when Chinese Communist Forces launched a large-scale surprise attack against U.S. forces at the reservoir,” according to the accounting agency’s profile page for DeLauter.

DeLauter was reported missing in action on Dec. 2, after the 32nd Infantry Regiment of the 7th Infantry Division withdrawal to Hagaru-ri.

DeLauter is memorialized at the National Memorial Cemetery of the Pacific’s Courts of the Missing in Honolulu.

Sharlene DeLauter, Roy’s oldest daughter, said the festivities at the airport all the way to Rest Haven were “more than we ever expected.”

“To actually see the coffin coming off (the plane) was just closure for me — and being able to touch it,” said Sharlene DeLauter, 74, who lives near Smithsburg.

“I can’t explain how I felt. I saw the casket, it was just amazing,” she said.

Carr said she was “overjoyed that he’s here. This is home, a homecoming for him.”

“But he’s been home for a long time. He’s been in Heaven,” Carr said.