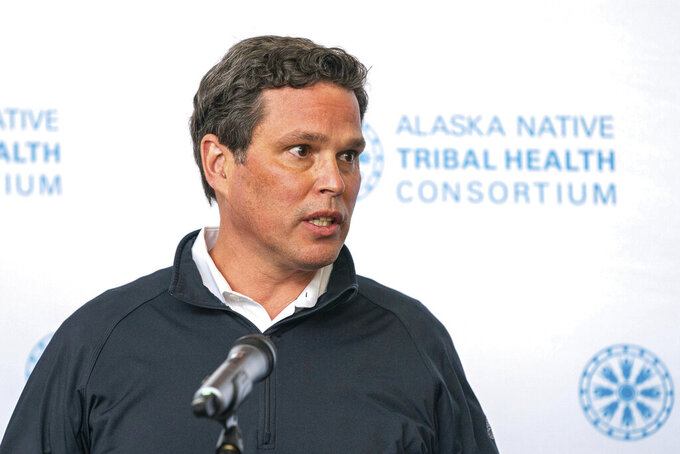 Loren Holmes, ASSOCIATED PRESS
FILE - In this Aug. 12, 2020, file photo, Alaska Native Tribal Health Consortium Chairman Andy Teuber speaks at a press conference at the Alaska Native Tribal Health Consortium in Anchorage, Alaska. A federal report says Teuber died in a helicopter crash while trying to reach his family before they saw a newspaper story detailing allegations of sexual misconduct against him. Teuber, the former head of Alaska's largest health care organization, is presumed dead in a crash of his R helicopter March 2, 2021, in the Gulf of Alaska. (Loren Holmes/Anchorage Daily News via AP, File)

ANCHORAGE, Alaska (AP) — An Alaska man died in a helicopter crash while trying to reach his family before they saw a newspaper story detailing allegations of sexual misconduct against him, a new federal report says.

Andy Teuber, 52, the former head of Alaska’s largest health care organization, is presumed dead in a crash of his Robinson R66 helicopter March 2 in the Gulf of Alaska.

A National Transportation Safety Board report released Tuesday did not have a cause of the crash but provided details of the flight, in which a pilot for the charter company owned by Teuber, Kodiak Helicopters LLC, described him as “distracted” and not acting normally before flying that day, the Anchorage Daily News reported.

A story from the Daily News and ProPublica published the day Teuber died detailed allegations of harassment and sexual misconduct made in a Feb. 23 letter to the board of the Alaska Native Tribal Health Consortium, the organization that Teuber was paid about $1 million annually to lead. Teuber’s former assistant Savanah Evans made the accusations against Teuber, including that he “unrelentingly coerced, forced and required sex” of her.

The Associated Press does not usually name victims of alleged sexual misconduct, but the Anchorage Daily News said she gave permission to use her name.

He abruptly quit his job after the letter was shared with the board. Evans also quit. In an email to the Daily News after his resignation, he disputed the allegations and said he had a “completely consensual personal relationship.

Teuber had gotten married the day before the article published. His new wife told investigators he went straight from the flight to Anchorage to Merrill Field, the city’s small aircraft airport, to get to other family in Kodiak.

According to the report, a company pilot told investigators that Teuber told him he needed the helicopter the next few days and to cancel any previously scheduled charters.

When Teuber arrived at Merrill Field, he asked the pilot to fill the helicopter’s fuel tank.

“He added that he had brief contact with (Teuber) while unloading his personal gear from the helicopter, but that the accident pilot seemed distracted and was not himself,” safety board investigator Eric Swensen wrote. “Just before departure, the accident pilot commented to the Kodiak Helicopters pilot that he wanted to be in Kodiak, and with his family, when a local news story involving him was scheduled to publish.”

Teuber’s state of mind is among factors investigators are looking out when assessing the cause of the crash. The federal agency called in a human performance investigator to weigh what role, if any, that may have played.

Teuber got married in the Lower 48 and flew “all night” to get back to Anchorage, Clint Johnson, the agency’s Alaska chief, told the newspaper.

“This is a unique situation,” Johnson said. “Everything that was going on outside of the actual flight down there has bearing on it. The state of mind, the rest, the 72-hour history is very important.”

Weather is another possible factor.

Pilots have described the area of the Gulf of Alaska where the helicopter was presumed to have gone down as turbulent with unpredictable winds.

A tracking system last recorded Teuber’s helicopter about 90 minutes after he left Anchorage. The data stopped in an area south of the Barren Islands over open water. The last signal was recorded between Ushagat and West Amatuli islands. The helicopter was about 400 feet (121.92 meters) above the water and traveling at about 150 mph (241 kph).

A final report on the crash is expected from the federal agency within a year.