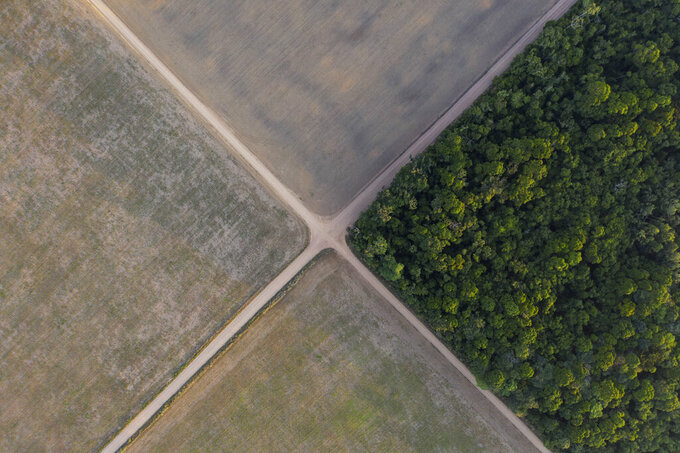 Leo Correa, ASSOCIATED PRESS
FILE - In this Nov. 30, 2019 file photo, a section of Amazon rainforest stands next to soy fields in Belterra, Para state, Brazil. Powerful businesses are urging Brazil's President Jair Bolsonaro to give up its long-standing resistance on key issues at this year's U.N. climate talks, arguing the country can't afford to pass up the chance to use its vast natural wealth in the fight against global warming. Last week, Brazil surprised observers by joining an international pledge to halt and reverse deforestation by 2030. (AP Photo/Leo Correa, file)

GLASGOW, Scotland (AP) — Powerful businesses are urging Brazilian President Jair Bolsonaro to give up the country's long-standing resistance on key issues at this year's U.N. climate talks, arguing that Brazil can't afford to pass up the chance to use its vast natural wealth in the fight against global warming.

The Brazilian Business Council for Sustainable Development, which says it represents companies behind almost half of the Latin American nation's economy, has called upon the government to clamp down on illegal deforestation and ease its hardline stance over carbon markets.

Those efforts, which echo similar demands by international investors and U.S. lawmakers, appeared to be bearing fruit.

Last week, Brazil surprised observers by joining an international pledge to halt and reverse deforestation by 2030. And a speech Wednesday by Brazil's environment minister is expected to see the country lay out a new position on carbon markets that could help break long-running deadlock on the issue.

“We have positive signs from the government," said Marina Grossi, president of the business group known by its Portuguese acronym CEBDS and includes mining giants Anglo American and Vale, and oil firms Petrobras and Shell.

Grossi said Brazil's private sector believes the country can achieve its target of reaching net zero emissions by 2050 — a date recently brought forward from 2060 — by protecting the huge carbon-absorbing Amazon.

“It’s a great opportunity," she told The Associated Press in an interview Tuesday. “Our big elephant in the room is illegal deforestation."

Brazil's government has paid little heed to similar demands from environmental groups. But Grossi said big businesses may be better placed to win over Bolsonaro's right-wing government, which faces an election next year.

“The private sector was saying it’s good for business, it’s not ideological," she said.

In addition to being able to boost its emissions reduction efforts by saving the Amazon, Brazil could benefit greatly if countries at this year's U.N. climate talks reach agreement on the issue of carbon markets. Known as ‘Article 6,’ efforts to resolve the issue have eluded negotiators for years, but officials are optimistic that a breakthrough might be possible in Glasgow.

Brazil would likely have to compromise on its demands to hold onto questionable carbon credits it amassed under a previous agreement. But a deal that provides rigorous rules for carbon markets could make Brazil a prime destination in the future for countries and companies hoping to offset their own excess emissions.

There are signs that Brazil’s government will relinquish its claims to old carbon credits. One minister and an environment ministry aide involved in the negotiations in Glasgow told the AP that the decision to do so has already been made. Brazil would likely seek to leverage the reversal of its position to extract benefits, they said. Both spoke on condition of anonymity because talks are private and ongoing.

Speaking in a panel discussion, Brazil’s Environment Minister Joaquim Leite highlighted the need for developing countries to receive more than the $100 billion in financial support promised by rich nations to help achieve a global green transition.

“A study came out days ago from a bank saying $5 trillion per year, both public and private,” Leite said, adding that Brazil needs to have clear policies and incentives to foment green development.

But some investors remain skeptical whether the current Brazilian government will change its approach to deforestation, climate change and the rights of indigenous people.

“As a global investor, we have to be honest and open that the head of the country is repelling foreign investment by his path towards the destruction of its forests,” he said. “Whatever environment minister Leite says, it is Bolsonaro who calls the shots.”

Follow AP's coverage of the climate talks at http://apnews.com/hub/climate