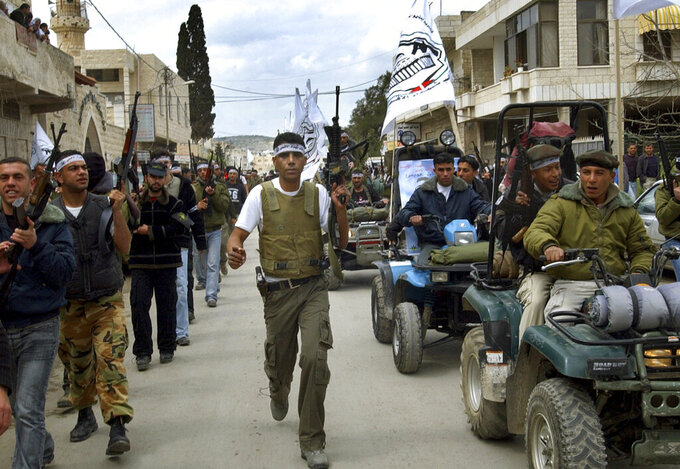 MOHAMMED BALLAS, ASSOCIATED PRESS
FILE - In this April 2, 2005 file photo, Zakaria Zubeidi, center, then local leader of the Al Aqsa Martyrs Brigades and other militants march in the West Bank town of Jenin during a rally to mark the third anniversary of the assault by the Israeli army on the Jenin refugee camp. For nearly two decades, Zubeidi has been an object of fascination for Israelis and Palestinians alike, who have seen his progression from a child actor to a swaggering militant, to the scarred face of a West Bank theater promoting “cultural resistance” to Israeli occupation. In his latest act, he has emerged as one of Israel's most wanted fugitives after tunneling out of a high-security prison on Monday, Sept. 6, 2021 with five other Palestinian militants. (AP Photo/Mohammed Ballas, File)

JERUSALEM (AP) — For nearly two decades, Zakaria Zubeidi has been an object of fascination for Israelis and Palestinians alike, who have seen his progression from a child actor to a swaggering militant, to the scarred face of a West Bank theater promoting “cultural resistance” to Israeli occupation.

Now he has emerged as one of Israel's most wanted fugitives after tunneling out of a high-security prison on Monday with five other Palestinian militants.

Zubeidi, now in his mid-40s, comes from a generation of Palestinians who were children during the first intifada, or uprising against Israel, which erupted in 1987. They lived through a brief period of hope at the height of the peace process, only to take up arms in the far more violent intifada that erupted in 2000, and which claimed the lives of Zubeidi's mother, brother and several comrades.

But even among that cohort, few Palestinian militants had closer ties to Israelis than Zubeidi, who for many years was an even bigger celebrity in Israel than in the Palestinian territories.

To Israelis, he is a notorious terrorist responsible for suicide bombings and shooting attacks that killed civilians. He also is one of the few who regularly gave media interviews.

“In many ways, he’s the poster kid for Israelis of the Palestinian terror campaign of the second intifada,” said Yossi Kuperwasser, a retired general who served in Israeli military intelligence during the uprising. “He's a Forrest Gump, sort of. He played all the roles.”

Among Palestinians, Zubeidi was just one of several prominent militants of that era, his name having long ago faded from the headlines. Now, he and the other escapees are being hailed as national heroes for staging the biggest breakout from an Israeli prison in decades.

Zubeidi rose to prominence during the second intifada as the leader of the Al-Aqsa Martyrs Brigade, an armed offshoot of the secular Fatah party, in the impoverished Jenin refugee camp in the occupied West Bank.

The camp, which is home to Palestinian refugees from the 1948 war surrounding Israel's creation, was the scene of a major battle with the Israeli army in 2002. A mishandled explosive left a peppering of black scars on Zubeidi's face, and he spent years eluding Israeli authorities.

A far younger Zubeidi appears in the archival footage of “Arna's Children,” a 2004 documentary about a children's theater founded in the Jenin refugee camp in the late 1980s by Arna Mer-Khamis, an Israeli Jewish activist who married a Palestinian and supported the Palestinian cause.

The film, made by her son Juliano, follows boys from the Jenin refugee camp who joined the theater as children, only to be drawn into the vortex of the second intifada as young men. Of the five core members of the group, only Zubeidi survived. Juliano was gunned down in Jenin in 2011 under mysterious circumstances.

In a 2006 interview with the U.K.'s Sunday Times, Zubeidi traced his militancy back to the death of his mother, Samira, who was killed by an Israeli sniper in 2002. His brother, Taha, was killed shortly thereafter, as were friends and fellow fighters. The theater Mer-Khamis started, which initially met on the roof of Zubeidi's family home, was demolished that year.

Another Israeli woman, Tali Fahima, also had an unlikely cameo in the drama. The pro-Palestinian activist struck up a friendship with Zubeidi during the intifada and met with him in Jenin. Israel arrested her in 2004 and she spent three years in prison for aiding a terrorist organization.

Israeli media speculated the two were lovers — something they both denied. In an interview with Israel's Channel 10 in 2008, Fahima accused Zubeidi of collaborating with Israel's Shin Bet security service after he secured permission to travel from Jenin to the West Bank city of Ramallah for eye surgery.

The intifada had begun to wind down in 2005 after the election of President Mahmoud Abbas, who is committed to resolving the decades-long conflict through negotiations with Israel. He seeks to establish a Palestinian state in the West Bank, Gaza and east Jerusalem, territories Israel seized in the 1967 war.

In 2007, Zubeidi availed himself of a general amnesty for militants from Abbas' Fatah party and joined the Freedom Theater, which Juliano Mer-Khamis had founded the previous year to continue his late mother's legacy.

"We want to take the Palestinian cause to the people through theater,” Zubeidi told The Associated Press in 2008. But he never surrendered his weapons to the Palestinian Authority, saying even then that he did not trust the amnesty agreement and feared for his life.

In 2011, Israeli media reported that Israel had revoked Zubeidi's pardon without giving a reason. The Palestinian Authority arrested him the following year after a shooting outside the home of Jenin's governor. Zubeidi was released months later after a widely publicized hunger strike.

He has led a quieter life over the last decade, working on prisoner affairs for the same Palestinian Authority that had jailed him and studying political science at Birzeit University in the West Bank. His relatives say he gave up militant activities long ago.

“As long as we are under occupation, no Palestinian will abandon the struggle against the occupation," Zubeidi's brother, Yehia, told The Associated Press. “But there are a lot of factors, like age, a decision to take a break.”

Israel arrested Zubeidi again in 2019. He was later charged with taking part in two shooting attacks against Israeli buses in the occupied West Bank, in which no one was seriously wounded, and was said to have been planning a third. Allegations dating back to the intifada were added to the charge sheet.

His brother said Zubeidi did not acknowledge the charges and was awaiting trial.

He was held at Gilboa prison, a maximum-security facility in northern Israel just a few miles (kilometers) away from Jenin. He shared a cell with five members of the Islamic Jihad militant group from Jenin, four of whom were serving life sentences on terrorism convictions.

Early on Monday, each of them squeezed into a narrow hole in the floor of their cell and escaped through a tunnel running beneath the prison walls. It's unclear what role Zubeidi played in the escape, but he is the most famous of the six — and is once again among Israel's most wanted.

Kuperwasser suspects that if he remains at large long enough he'll return to his old ways — and not just the militancy.

"It’s dangerous for him, but I wouldn’t be surprised if he would look for an opportunity to speak with somebody to gain some more political clout from his success in escaping prison.”