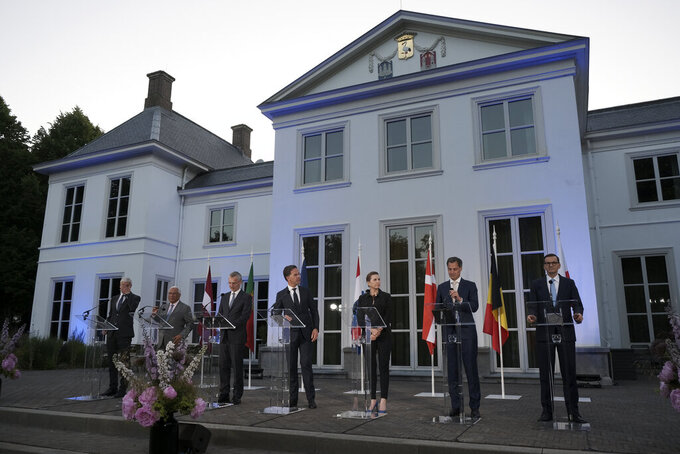 THE HAGUE, Netherlands (AP) — The leaders of seven NATO nations from across Europe pledged their support Tuesday for Sweden and Finland's bids to join the alliance and for providing more heavy weapons to help Ukraine battle Russia.

The support was voiced after an informal gathering at Dutch Prime Minister Mark Rutte’s official residence in The Hague co-hosted by his Danish counterpart, Mette Frederiksen. The other leaders attending were Romania’s president and the prime ministers of Belgium, Poland, Portugal and Latvia.

“My message on Swedish and Finnish membership is that I strongly welcome that," said NATO Secretary-General Jens Stoltenberg, who also attended. “It’s an historic decision. It will strengthen them, it will strengthen us.”

But he said the alliance also has to take seriously concerns raised by Turkish President Recep Tayyip Erdogan, who has vetoed membership for the two countries until they change their policies on supporting Kurdish militants deemed by Ankara to be terrorists.

"There is no other NATO ally that has suffered more terrorist attacks than Turkey,” Stoltenberg said.

Stoltenberg said Monday that he was glad the Swedish government had confirmed its “readiness to address Turkey’s concerns as part of assuming the obligations of future NATO membership.”

Polish Prime Minister Mateusz Morawiecki, meanwhile, criticized the support so far for Ukraine, which has time and again called for more and heavier weapons.

“We have not done enough defend Ukraine, to support Ukrainian people to defend their freedom and sovereignty. And this is why I urge you, I asked you to do much more to deliver weapon, artillery to Ukraine,” Morawiecki said.

“Where is our credibility if Ukraine fails? Can we imagine that Ukraine fails and we revert back to business as usual? I hope not,” he added.

The meeting came ahead of a June 29-30 NATO summit in Madrid that will seek to set a tough course for the alliance in coming years.

Stoltenberg said the alliance has beefed up its defenses following Russia's invasion of Ukraine, reinforcing “our ability to protect and defend every inch of NATO allied territory.”

He said that in Madrid, “we will take the next steps and agree a major strengthening of our posture. Tonight we discussed the need for more robust and combat ready forward presence, even higher readiness and more pre-positioned equipment and supplies.”

He also said that "Ukraine should have more heavy weapons, and NATO allies and partners have provided the heavy weapons now for actually a long time. But they are also stepping up.”

The meeting followed a gathering Friday in Bucharest of nine NATO nations on the alliance’s eastern flank where some leaders urged NATO to step up protection in light of Russia’s protracted war against Ukraine.

“We need to make sure that NATO is able and prepared to respond effectively and calibrated to the threats it faces,” Romanian President Klaus Iohannis told reporters after Friday’s meeting. “The alliance needs to be able to defend every inch of its territory.”

Three NATO members — Bulgaria, Romania and Turkey — border the Black Sea, which has turned into a key battleground in the war in Ukraine.

Follow AP’s coverage of the Ukraine war at https://apnews.com/hub/russia-ukraine