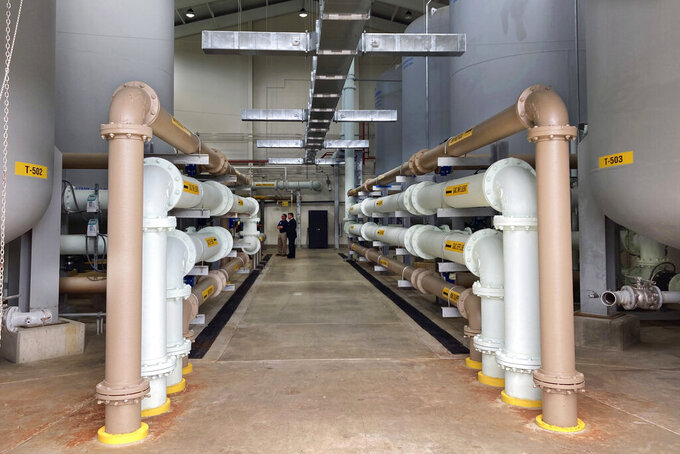 Michael Catalini, ASSOCIATED PRESS
Federal and state officials unveiled more than a half a billion dollars in federal and state low-interest loans to finance some nearly 30 drinking and surface water infrastructure projects around New Jersey, including the North Church Street Water Treatment Plant in Moorestown, N.J., Friday, May 20, 2022. The Moorestown plant received about $20 million in funds. The plant had been shut almost six years ago because of contamination concerns, according to Moorestown Mayor Nicole Gillespie, but reopened recently because of the funding. (AP Photo/Mike Catalini)

MOORESTOWN, N.J. (AP) — More than half a billion dollars in federal and state funds will go to nearly 30 water systems in New Jersey, serving about 6 million residents, or about two-thirds of the state's population, officials said Friday.

The combined federal and state funding of $588 million in low-interest loans will cover an array of projects: In Newark, the state's biggest city, some $25 million will go toward lead service line replacement; in suburban Philadelphia's Moorestown at the North Church Street Water Treatment Plant, where officials unveiled the funding on Friday, about $20 million will cover new filters to remove radium and other toxins from water; in rural Clinton, a water system is getting almost $3 million as part of a water main extension project.

The announcement is the latest orchestrated this year by Democratic Gov. Phil Murphy’s and President Joe Biden’s administrations to retool and repair crumbling infrastructure. Vice President Kamala Harris made a stop in Newark in February to highlight the city’s efforts at removing lead pipes.

The funding includes $221 million from the Environmental Protection Agency under a 2014 law known as the Water Infrastructure Finance and Innovation Act. The remainder comes from a mix of state funding and from the sale of bonds from the New Jersey Infrastructure Bank, a state authority that finances road, water and other projects.

Environmental Protection Agency officials said the announcement demonstrated a partnership between the state and federal governments that will shore up water systems. EPA Assistant Administrator Radhika Fox also pointed to the $1 trillion bipartisan infrastructure law that Biden signed in November, though those funds are separate from the loans unveiled Friday.

Local and state officials welcomed the investment, which will be rolled out over three years, with Moorestown's Mayor Nicole Gillespie saying it was one of the largest in the town's history.

It's not free money. The state water systems — for the most part — are on the hook for investments, but the price they're paying under the low-interest rates as part of the deal announced Friday means they'll be spending less, according to David Zimmer, executive director of the New Jersey Infrastructure Bank.

Zimmer pointed to Moorestown, which he said has a good credit rating and could get a good rate from selling their own bonds on the market.

“Instead they come to our program," he said. “It’s 30% cheaper. They'd probably have to pay $23 million through us but on their own 29 million."

New Jersey’s water infrastructure has been in the headlines in recent years stemming from outrage in 2019 over elevated lead levels in drinking water in the state’s biggest city. Since then, Newark has gotten a handle on the problem, replacing nearly all the lead lines in about three years when it initially estimated it would take a decade.

The state has also moved to replace lead lines throughout New Jersey, with Murphy signing legislation last year that mandated inventories of lead pipes as well as replacement over 10 years.

New Jersey is getting $1 billion over five years from the bipartisan federal infrastructure legislation, with $170 million slated for this year.

It’s just a fraction of the estimated $30 billion in new pipes, equipment and other improvements the state needs.

The federal funds will be dispersed over time, with about $170 million slated for this year.

Just what that money will go toward exactly will depend in part on the outcome of planned stakeholder meetings, part of the state's plan for handling the funds.