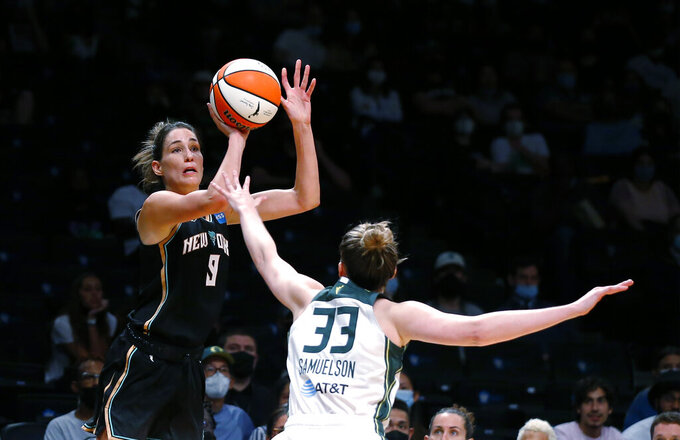 NEW YORK (AP) — Liberty coach Walt Hopkins told his players at the morning shootaround that they were facing a “must-win” game.

They got the victory, thanks to a big fourth-quarter rally.

Betnijah Laney scored 17 points, including the go-ahead basket from the top of the key with 17.6 seconds left, to lift New York to an 83-79 win over the short-handed Seattle Storm on Wednesday night.

“This would have been tough to recover from. There are very few times where you have a legitimate chance to steal one from Seattle," Hopkins said. "We had to win this one because of the outcome of the last few games for us. For our team's morale and momentum this was a must-win game for us.”

The Liberty (11-12) trailed by 10 heading into the fourth quarter before rallying behind Rebecca Allen, who had nine of her 17 points in the period. Her third 3-pointer of the quarter made it a two-point game with 1:38 left.

After a basket by Natasha Howard tied it, New York then got a stop on the other end and Laney took a few dribbles from the wing and banked in a shot just inside the 3-point line to beat the shot clock.

"Time was ticking and it had to go up. I did not call bank,” Laney said laughing. “I felt it was going straight in. I will take it anyway."

Laney then stole the ball on the ensuing possession and New York's Sami Whitcomb made two free throws with 2.6 seconds left to seal the win.

“We all knew how big a win this was for us,” Sabrina Ionescu said. “The growth of our team as well. I think we’re just continuing to play together and figure out what is helping us win games. ... Every game moving forward is huge. We can’t take anything for granted. Hopefully we’ll build on this win.”

The comeback ruined a stellar effort by Jewell Loyd, who scored 21 of her 35 points in the third quarter for Seattle. The 35 points matched her career best.

The Storm (16-7) were missing stars Sue Bird and Breanna Stewart, who were still resting after leading the U.S. to a seventh consecutive gold medal at the Olympics earlier this month. They are expected back when the teams play again on Friday.

It didn't appear their absences would matter as the Storm still had Loyd, their third Tokyo Games gold medalist.

Trailing by one at the half, Loyd took over with a dazzling shooting display. She scored 17 of the team's 19 points in the first five minutes of the third quarter to give the Storm a 58-49 lead. She hit jumpers from virtually everywhere on the court, making seven of her first eight shot attempts in the period.

By the time the quarter was over, Loyd outscored the Liberty 21-20 and Seattle led 72-62. After scoring the final five points of the third quarter, New York scored 10 of the first 12 points in the fourth to get back in the game.

Hopkins put rookie DiDi Richards on Loyd in the fourth quarter. Loyd missed all seven shots in the period.

“DiDi Richards was integral in this. We don’t win this game without DiDi, her defense on Jewell," Hopkins said. "She’s a really special kid. She’s tough, she’s versatile, going to be one heck of a player. I can’t say how proud I am of DiDi. That’s the best way to talk about the fourth quarter is to talk about her.”

New York was missing Jazmine Jones, who was sidelined with a minor right foot injury. She was in a walking boot, but Hopkins said she is day-to-day.