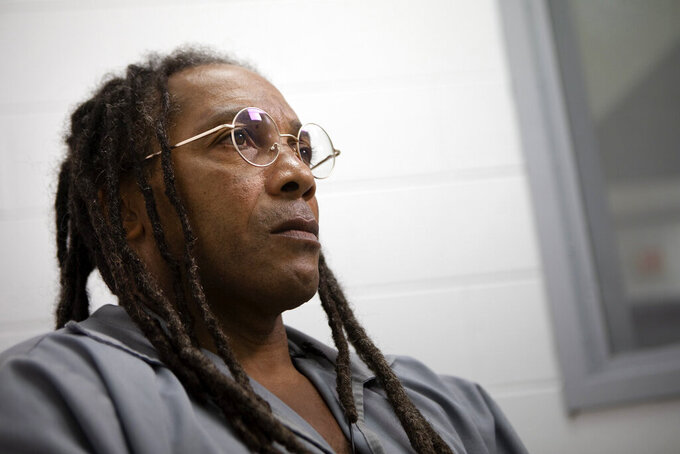 James Wooldridge, ASSOCIATED PRESS
FILE- In this Nov. 5, 2019 file photo, Kevin Strickland is pictured in an interview room at Western Missouri Correctional Center in Cameron, Mo. A hearing that could determine whether Kevin Strickland will be released from prison after serving more than 40 years for a triple murder conviction will be held in Jackson County, a judge ruled Friday., Sept. 17, 2021. (James Wooldridge/The Kansas City Star via AP, File)

KANSAS CITY, Mo. (AP) — A hearing that could determine whether Kevin Strickland will be released from prison after serving more than 40 years for a triple murder conviction will be held in Jackson County, a judge ruled Friday.

Circuit Judge Kevin Harrell rejected a motion filed by Missouri Attorney General Eric Schmitt's office asking Harrell to recuse himself and all other Jackson County judges from hearing Strickland's case because the presiding judge in that circuit has said he agrees with the local prosecutor's contention that Strickland was wrongfully convicted.

Harrell also said Friday that an evidentiary hearing during which prosecutors will argue that Strickland was wrongfully convicted and should be released from prison will be held the first week of October. The exact date will depend on the attorneys' schedules.

Jackson County Prosecutor Jean Peters Baker announced in May that she and other legal and political leaders believe that Strickland, now 62, was wrongfully convicted of killing three people in Kansas City in 1998.

Using a new state law, Peters Baker filed a motion in August asking for an evidentiary hearing during which prosecutors will argue that Strickland should be exonerated and released from prison.

In a letter in May, Peters Baker said Dale Youngs, the presiding judge in the 16th Circuit Court, “concurs on behalf” of the court that Strickland was wrongfully convicted.

The attorney general’s office has said that statement shows that Jackson County judges are biased in Strickland's favor. Schmitt's office has argued that Strickland is guilty.

But Harrell said he could be impartial. He said he hadn't heard of Youngs' statement about the Strickland case before it was raised as an issue in his courtroom, The Kansas City Star reported.

Harrell also denied a motion by the attorney general’s office to move the case from criminal to civil court. Harrell said lawmakers meant for criminal courts to hold hearings under the new law, which gives local prosecutors the power to argue that a prisoner was wrongfully convicted.

The Star reported in 2020 that two men who pleaded guilty in the killings swore Strickland was not with them and two other accomplices. And an eyewitness who identified Strickland as the killer recanted her statements before she died, prosecutors said.