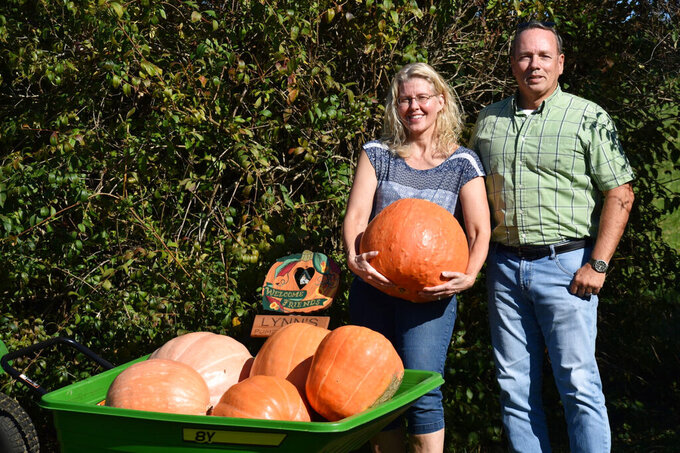 David Kirk, ASSOCIATED PRESS
Lynn and Frank Jarman pose with their pumpkins grown this year on Oct. 27, 2021, in White Hall, W.Va. Lynn holds one of their largest pumpkins, which weighs about 63 pounds. “Gardening isn’t for everybody, but I’d highly endorse it for couples, specifically growing pumpkins.," Frank said. (David Kirk/Times-West Virginian via AP)

WHITE HALL, W.Va. (AP) — Lynn Jarman has loved pumpkins since she was a small child.

Having grown up on her grandfather’s farm outside Shinnston, in a small unincorporated town called Adamsville, she learned about growing all sorts of things, but one of her most significant memories is when she grew her first pumpkin.

“My grandmother had a huge garden outside of her house and I found a dried up pumpkin seed on my grandfather’s chair where he’d sit outside to change his shoes,” Lynn said. “It was just one seed. I asked my grandmother if I could plant it in the garden, she said, ‘Sure, just put it in the back.’”

It wasn’t long before her grandmother’s garden was overrun with little orange gourds. These weren’t the large pumpkins, they were the smaller food-grade pumpkins.

Lynn remembers sitting in a pile of all her pumpkins after the day she and her grandmother picked them out of the garden.

“She didn’t let me plant pumpkin seeds after that but I think that’s where my love for (pumpkins) started,” Lynn said. “It was really neat as a seven-year-old girl to see what that little seed could do.”

That was one of the last times Lynn planted something of her own, but that experience and appreciation of pumpkins has stuck with her throughout her life.

Now, at 57, Lynn still remembers being that little seven-year-old girl and the joy she found in growing something of her own. Her husband, Frank Jarman, decided to help her rekindle that love.

“When Lynn told me about the influence pumpkins had on her as a child — getting to go to the Canfield Fair and seeing a 1,000-pound pumpkin — she told me she wanted to grow one like that,” Frank said. “I’ve been trying to foster that dream since.”

Christmas of 2019, Frank found a shop online that sells seeds from an award-winning, 1,000-pound pumpkin. He knew that was the perfect gift.

The two of them started growing the gourds inside their home in White Hall, just down the road from the elementary school. Once the beds got too big, they moved them outside onto their patio.

The harvest of 2020 brought them seven, 23-pound pumpkins. While 23 pounds is an improvement from the little cooking pumpkins Lynn grew as a child, the Jarmans weren’t satisfied.

They continued to research, to learn more about the intricacies of growing, what Frank called, “the diva of the garden.”

“I grew up on a farm in North Carolina, and (pumpkins) are nothing like what I grew there. These are a diva of a plant,” Frank said. “There’s a lot to pumpkins that I didn’t know.”

After what they considered a trial run, Lynn and Frank decided to go all out in the spring of 2021 and set up their own pumpkin patch in their backyard.

With the help of their neighbors and a lot of time researching the internet about tips and tricks, they were hopeful about what the 2021 harvest would bring.

“(Pumpkins) take a lot of water, it seemed like the more we watered them the bigger they’d get,” Lynn said. “Then we had to get a sun shield we’d have to put over them. Once they turn orange, their skin gets tight and they won’t grow more.”

After carefully pampering their “garden of divas,” they were left with seven more pumpkins. The biggest of them weighed in at 63 pounds, almost triple the weight of the biggest gourd last year.

“We almost tripled it, I mean that’s good but our goal really is a 1,000-pound pumpkin,” Frank said. “Next year we have to find people who grow huge ones regularly and find out what they do.”

With next year coming fast, the two have already started looking into local farmers and growers that consistently raise these mega-pumpkins.

But as the couple looks forward to 2022, they have also looked back on their time spent together and how much life has changed over the last two years.

“It still amazes me that you can take that little seed and grow vegetables with it or a pumpkin you can carve,” Lynn said. “We’d always come home right after work and water them, look at them. (Frank) even took chairs down to the garden so we could sit and look at them.”

In both of their jobs, they have seen first-hand how COVID-19 has impacted individuals and their families. Having the garden to come home to every day helped bring some normalcy to their lives.

“During the pandemic, having something to focus on other than the trauma going on around us was therapeutic,” Frank said. “Coming home every day after seeing the case numbers going up, being able to come home and taking care of it all really helped.”

There’s plenty of science to back up that claim too. A 2018 study by the Royal College of Physicians and published by the National Institutes of Health found that activities, such as gardening can have positive impacts on mental health.

“There is increasing evidence that exposure to plants and green space, and particularly to gardening, is beneficial to mental and physical health,” states the study titled “Gardening for health: a regular dose of gardening.”.

The study showed that simply being exposed to different plants reduced the hospital stay and reported lowering pain levels of post-operative patients. Researchers also found that the physical activity required by gardening reduced stress and anxiety as well as physical ailments such as high blood pressure.