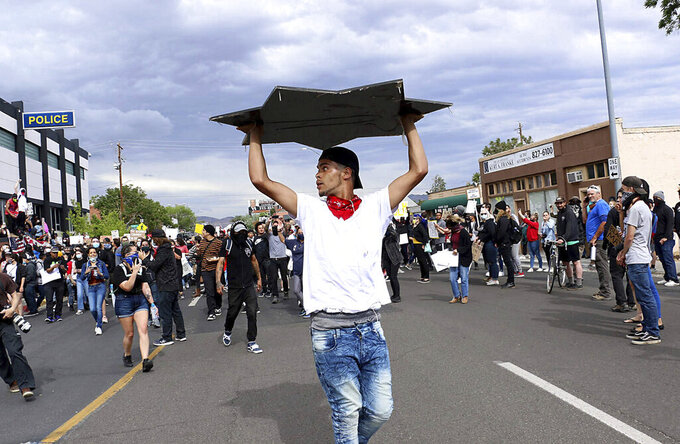 Jason Bean, ASSOCIATED PRESS
A man walks off with the shield taken from the front of the Reno Police headquarters building during a Black Lives Matter rally and civil unrest in downtown Reno, Nev., on May 30, 2020. The Reno Gazette-Journal was among the more than 100 awardees recognized for their work by The Nevada Press Association on Saturday, Sept. 18, 2021, at a ceremony in Reno. (Jason Bean/The Reno Gazette-Journal via AP)

RENO, Nev. (AP) — The Nevada Press Association bestowed its top honors on reporters and photographers from the Las Vegas Review-Journal for the second year in a row Saturday while also recognizing the newspaper for general excellence in a category of urban daily publications.

The press association convention, which was canceled last year because of COVID-19, opened Friday with an informal gathering hosted by the Reno Gazette-Journal at its new headquarters in downtown Reno.

Contest winners, judged by the Montana Press Association, were honored Saturday night at an annual awards banquet that followed daytime meetings and seminars and a luncheon where inductees into the association’s hall of fame were honored.

Review-Journal reporter Rio Lacanlale and photographer Benjamin Hager were awarded as the state’s outstanding journalist and outstanding visual journalist, respectively, in 2021. Judges praised Lacanlale's reporting for its style and depth, noting her work on the Clark County Sheriff's Department, victims of a 2017 mass shooting and relatives of a Black man choked to death by police decades ago. They praised Hager for creativity, angles and visual elements, noting his work on Las Vegas performers and Black Lives Matter protests.

Reno Gazette-Journal photographer Jason Bean was honored for photo of the year and Mike Smith of the Las Vegas Sun for the year's top editorial cartoon.

Megan Messerly of the Nevada Independent and the staff of the Reno Gazette-Journal were jointly awarded story of the year honors for retrospective pieces on the coronavirus pandemic.

The Gazette-Journal's entry was a series of stories about groups affected by the coronavirus pandemic including parents, first-responders and people who died in hospitals alone.

Messerly's was an in-depth look at how state officials responded to the first year of the pandemic.

In the rural publications category, the Boulder City Review won the association's general excellence award and was recognized for its news reporting, opinion page and design. Jeffrey Meehan of the Pahrump Valley Times won investigative story of the year in the category. Reporter Amy Alonzo's piece on sexual misconduct at Fernley schools for the Mason Valley News won the category's honors for explanatory journalism and news feature story.

The Las Vegas Sun's Justin Emerson won “Journalist of Merit,” and Edible Reno-Tahoe was awarded for general excellence in the magazine category.

The association recognized more than 100 awardees Saturday at a ceremony in Reno.