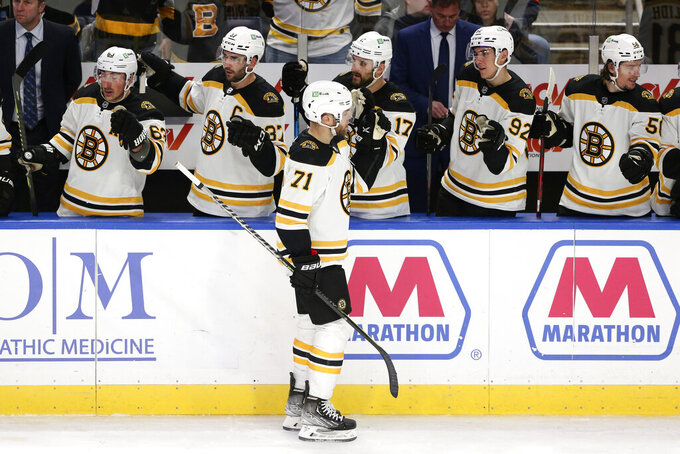 BUFFALO, N.Y. (AP) — Patrice Bergeron, David Pastrnak and Charlie Coyle each had a goal and an assist to lead the Boston Bruins over the Buffalo Sabres 5-1 on Wednesday night.

Mike Reilly and Taylor Hall also scored, Nick Foligno had two assists and rookie Jeremy Swayman made 24 saves as Boston bounced back from a 4-0 loss to Calgary on Sunday for its fourth win in five games and third straight on the road.

“I had the best seat in the house all night,” Swayman said. “It was fun to watch. It was a good camaraderie game. All the guys were super happy in the locker room, and I’m sure on the bench.”

Kyle Okposo scored for the Sabres, who lost their fourth in a row and are 2-8-1 following a 5-1-1 start.

The Bruins scored four times in 5:41 during the opening period and had a 22-8 edge in shots on goal.

That continued a trend for the Sabres, who gave up three goals in a 3:17 span during Monday’s 7-4 loss to Columbus and three goals in 1:37 of a 5-0 loss to Calgary last Thursday.

Bergeron and Coyle scored on wrist shots 51 seconds apart to give Boston a 2-1 lead.

Pastrnak drew a hooking penalty on Buffalo’s Rasmus Dahlin, and Charlie McAvoy fed Pastrnak for a power-play goal less than three minutes after Coyle put the Bruins ahead.

Reilly made it 4-1 with a minute left in the first when he scored on a rebound that rolled between the dropped sticks of Buffalo’s Colin Miller and Vinnie Hinostroza.

Hall got the fifth goal on a power play late in the third period after Buffalo’s Zemgus Girgensons received a five-minute game-misconduct penalty for checking McAvoy from behind and forcing him headfirst into the boards.

McAvoy needed stitches to close a gash above his eye. Cassidy said the Bruins expect McAvoy to remain in the lineup, and he didn’t think it was a dirty play by Girgensons.

“I know that if it was our player hitting a guy like that, I would say, boy, he was in a tough spot,” Cassidy said. “He’s just trying to finish his check. But at the end of the day, I know they are trying to get those hits out. But I can’t fault Girgensons. I don’t think there was any malicious intent, personally.”

Buffalo briefly led after Okposo used Bergeron as a screen to beat Swayman with a wrist shot midway through the period. Bergeron tied the score with his seventh of the season 2:33 later.

Swayman made 14 saves in the second, including one on a penalty shot by John Hayden.

Sabres: F Casey Mittelstadt skated wearing a non-contact jersey, his first practice since getting hurt in the Oct. 14 season opener.

Bruins: Host the New York Rangers on Friday in the NHL’s Thanksgiving Showdown.