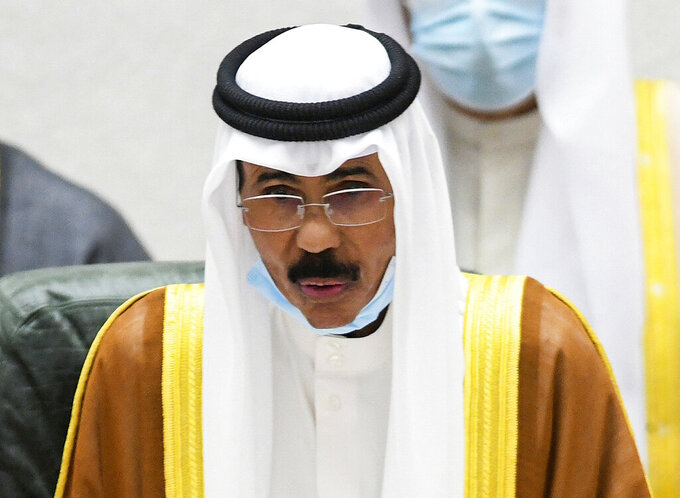 DUBAI, United Arab Emirates (AP) — Kuwait has temporarily handed its crown prince some of the ruling emir's constitutional duties, the royal family's secretariat announced on Monday, without explaining why the transfer was necessary.

The brief statement published by the state-run KUNA news agency said only that the government had issued an order for the crown prince to assume some duties of the 84-year-old ruling emir Sheikh Nawaf Al Ahmad Al Sabah. In the past, the royal office has made the move due to a ruler's poor health.

Last year, when the late Sheikh Sabah Al Ahmad Al Sabah underwent surgery, the oil-rich nation's crown prince took on some of his powers temporarily. Kuwait’s Information Ministry did not immediately respond to a request for comment.

Given Sheikh Nawaf's age, the move raises concerns about his health. State-run news previously reported that he traveled to the United States for unspecified medical checks in March. The health of Kuwait’s leaders remains a sensitive matter in the tiny Mideast nation that has seen internal power struggles behind palace doors.

The decree comes at a delicate time for the sheikhdom. The government resigned last week as tensions escalated between the Parliament and Cabinet. The emir issued a long-awaited pardon for scores of self-exiled dissidents.

Kuwait, a nation home to 4.1 million people that’s slightly smaller than the U.S. state of New Jersey, has the world’s sixth-largest known oil reserves. It has been a staunch U.S. ally since the 1991 Gulf War expelled the occupying Iraqi forces of Saddam Hussein.