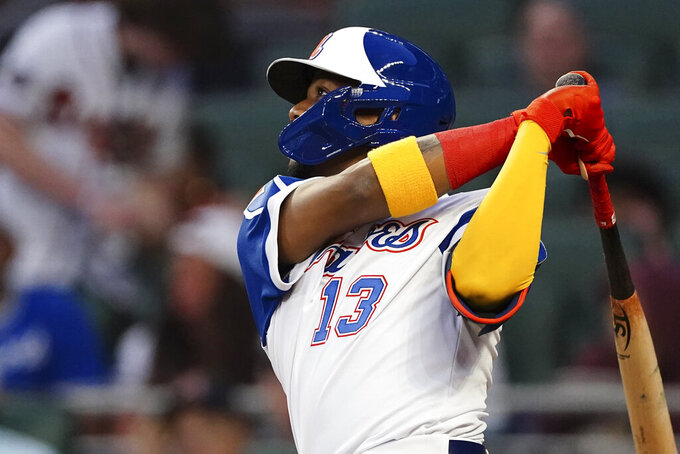 John Bazemore, ASSOCIATED PRESS
Atlanta Braves' Ronald Acuna Jr. follows through on a solo home run during the fourth inning of the team's baseball game against the Milwaukee Brewers on Friday, May 6, 2022, in Atlanta. (AP Photo/John Bazemore) 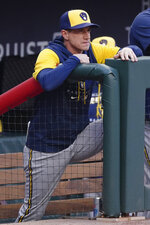 ATLANTA (AP) — The Milwaukee Brewers showed they can win without the long ball.

After hitting 20 homers in a six-game homestand against the Chicago Cubs and Cincinnati, the Brewers found different ways to score as they opened a nine-game trip.

The NL Central-leading Brewers have won four straight and nine of 10.

Atlanta’s Ronald Acuña Jr. opened the fourth with a 450-foot homer to center field — his first since returning from knee surgery. The momentum of Acuña’s big swing forced him to fall in the batter’s box before he rose to jog around the bases.

“I knew I got all of it,” Acuña said through a translator. "I just fell because I slipped a little bit afterward. ... I feel good, thankfully, and I feel healthy. That's the most important thing, thank God."

“I thought that's kind of embarrassing if he hit it that far while he fell, but it was afterward,” Lauer said.

Lauer (3-0) gave up two runs, one earned, on two hits and three walks in 6 1/3 innings. He had eight strikeouts, giving him 32 in his last three starts. The left-hander has allowed no more than one earned run in four consecutive starts and has a 1.82 ERA.

Josh Hader pitched the ninth for his 11th save. Hader, who had been bothered by back spasms, made his first appearance since April 27. Shortstop Willy Adames' throwing error on Marcell Ozuna's grounder with two outs allowed Atlanta's only baserunner of the ninth, Ozzie Albies popped out to end the game.

Milwaukee managed only two infield hits in the big sixth inning, but took advantage of four walks by Collin McHugh (0-1) and Tyler Matzek.

McHugh’s walk to Omar Narváez loaded the bases. Lorenzo Cain beat out a fielder’s choice grounder that forced Narváez at second base, giving the Brewers a 3-2 lead.

“I try to hustle as much as possible,” Cain said. “I was able to beat it out and it helped start a little rally there, which is nice.”

“We sent four more batters to the plate that inning,” Counsell said.

Kolten Wong’s walk again loaded the bases before Matzek’s walk to Adames forced in a run.

Yelich followed with a run-scoring infield single off Tyler Thornburg. Wong scored a second run on the play on Albies’ wild throw to second base for an error.

Rowdy Tellez hit a two-run, first-inning double off Jesse Chavez to center field to drive in Wong and Andrew McCutchen. Chavez, serving as the opener, allowed three hits and two runs in his only inning.

The Braves wore their 1974 throwback uniforms as part of their celebration of late Hall of Famer Hank Aaron this week.

Aaron began his major league career with the Milwaukee Braves and played his final two seasons with the Brewers. The Brewers joined the tribute by wearing Aaron's 44 on their uniform sleeves.

Brewers: RHP Luis Perdomo was promoted from Triple-A Nashville to work out of the bullpen. LHP Aaron Ashby, who has worked in relief and as a spot starter, will start on Sunday and is expected to remain in the rotation. Perdomo, who missed the 2021 season while recovering from Tommy John surgery, had a 5.19 ERA in five seasons with San Diego from 2016-20. IF Keston Hiura was optioned to Nashville.

Braves: C Manny Piña, on the 10-day injured list since April 25 with left wrist inflammation, is “still a little sore,” according to manager Brian Snitker. Piña has progressed to baseball activities, including hitting on Friday. ... Snitker said “everything is going good” for RHP Mike Soroka in his recovery from his second torn right Achilles tendon one year ago. Snitker said Soroka has thrown off the mound “a little bit.” Soroka was the Braves' opening day starter in 2020 and could be a boost to the rotation in the second half of the season.