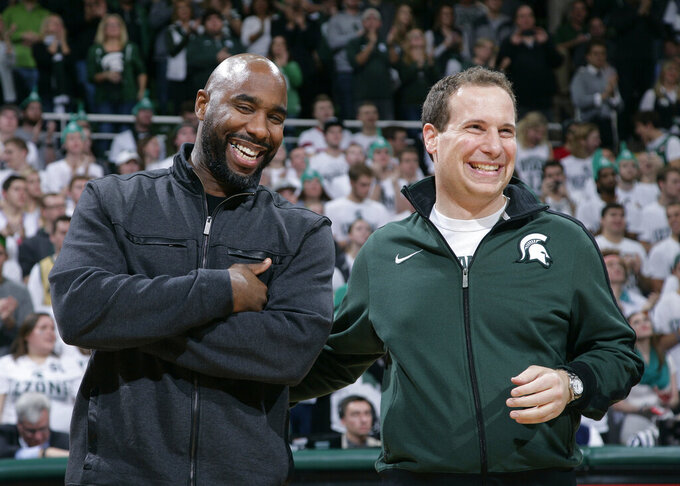 DETROIT (AP) — A suburban Detroit mortgage company led by a former Michigan State walk-on will pay $500 a month to all football players and members of the men's basketball team.

The sponsorship by Mat Ishbia and United Wholesale Mortgage will provide more than 130 MSU athletes with $6,000 a year. The NCAA in July said athletes could be paid for their name, image or likeness, now commonly referred to as NIL.

“Each player contributes to the team in a positive way and we’re excited to help support them, while also helping educate consumers about the benefits of independent mortgage brokers," Ishbia said in a statement released Wednesday.

The athletes will be paid for social media posts promoting career opportunities at the company, spokeswoman Nicole Yelland said.

The women's basketball team is not included, although Ishbia suggested the program could be expanded to other sports.

“We're going to walk before we run with this," he said in a statement. "This was the first step to understand the NIL process, but we’re always looking at different ways we can help out Spartan athletes.”

“Having access to resources like this would have made a huge difference in my career in a very positive way,” said Cleaves, who had a brief NBA career.

Elsewhere, BYU said all 123 football players will get an opportunity to be paid to promote products made by a Utah protein snack company.

American Top Team, a chain of mixed martial arts gyms, is offering a $500 monthly contract to Miami’s 90 scholarship players for advertising the gyms on social media.