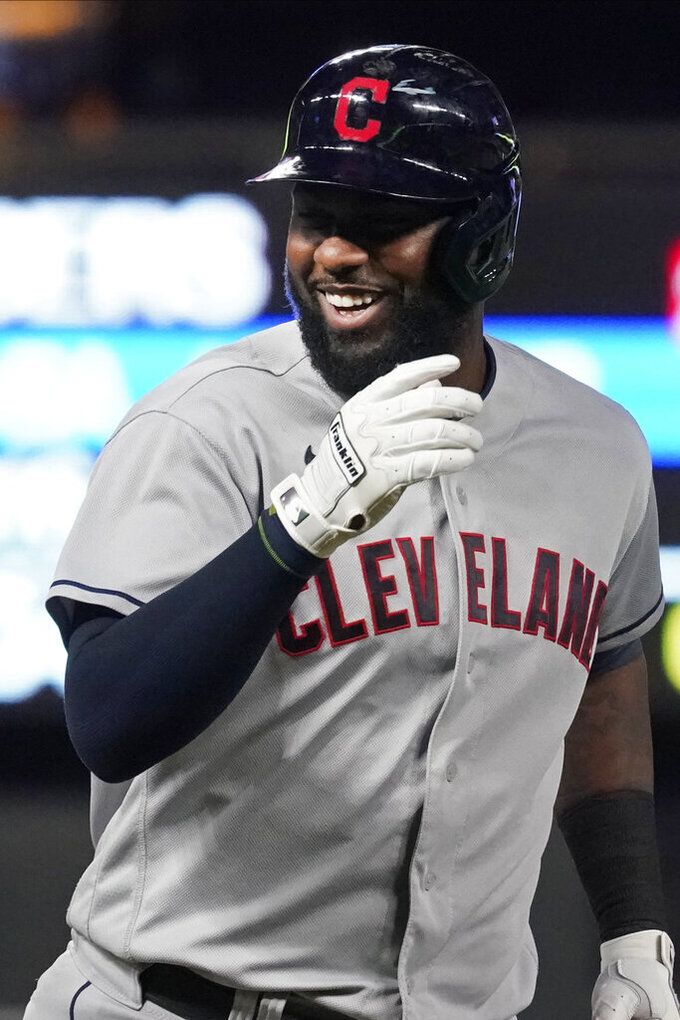 MINNEAPOLIS (AP) — Cal Quantrill was cruising until a five-run seventh inning by his Cleveland teammates extended his stay in the dugout while waiting to return to the mound in Minnesota for the bottom of the frame.

This was well worth the wait.

Oscar Mercado, Bobby Bradley and Franmil Reyes homered to help ignite a lagging Indians lineup and provide Quantrill plenty of support in a 12-3 victory over the Twins on Wednesday night.

“I will learn how to deal with long layoffs better before I ever complain about that,” said Quantrill, who gave up just one hit over six shutout innings before the snag in the seventh.

José Ramírez and Myles Straw each had three of Cleveland's 14 hits, and Mercado and Bradley each drove in three runs. Ramírez had two RBIs to reach 90 for the season for the Indians, who crossed home plate twice their total in their previous five games combined. They had 18 hits in that span.

“The guys have been grinding, and they’ve taken some heat in the last weeks, and I thought today was awesome. There was a lot of quality at-bats. They stayed on ’em, with their foot on their necks," Quantrill said. “As a starting pitcher, there’s just nothing better, right?”

Miguel Sanó had the only two hits for Minnesota against Quantrill (6-3), including the three-run homer in the seventh inning that followed two walks. The second one came right after Bradley dropped a foul pop-up in a swirling wind above first base for an error, making all the runs against Quantrill unearned.

After Sanó doubled in the second inning, Quantrill retired 13 straight batters. He finished 6 2/3 innings with three walks and four strikeouts.

Twins starter Griffin Jax (3-4) failed to finish that inning for the third time in his last five turns, though two of the five runs he allowed on Wednesday were unearned. In 69 innings this year, the rookie righty has allowed 19 home runs.

“We know that’s happening, but he’s showing enough in these starts to know that there’s something there. Have we fixed all the bugs at this point and worked through everything? No. We still have some work to do with Griff, but I think we’re going to get there,” manager Rocco Baldelli said.

This was Cleveland's final game in Minnesota as the Indians. The club's nickname will change to the Guardians for 2022. The Twins won the season series 11-8.

Jax, the 2016 third-round draft pick and first Air Force Academy graduate to appear in the major leagues, was announced this week as the Bob Feller Act of Valor Award winner. That's been given annually since 2013 to an MLB player or coach with a commitment to military service or support. Feller was the first major league player to enlist after the attack on Pearl Harbor in 1941. Jax maintains the rank of captain in the Air Force Reserves.

Indians: SS Amed Rosario was placed on the family medical emergency list so he could return to his native Dominican Republic to visit with an ill elderly relative. ... Hale said Bieber was “feeling pretty good” after his first rehab start for Triple-A Columbus: “We’ll try to slot him in to pitching in a big league game. That’s my wish."

Twins: RHP Joe Ryan reported no serious problems after being struck on the wrist by a batted ball on Tuesday. Baldelli said he wasn't sure yet if Ryan would take his next turn in the rotation. ... RHP Kenta Maeda, having begun his rehab from Tommy John elbow surgery, was asked how he's biding his time in Texas after the procedure: “It’s really difficult when you only have one arm to do everything in your daily life. Maybe just binge watch on Netflix and obviously I’ve been keeping up with the Twins and how we’re doing.”

The Indians have an off day on Thursday, followed by a three-game series in New York. RHP Zach Plesac (10-5, 4.45 ERA) pitches on Friday, with the Yankees starter yet to be announced.