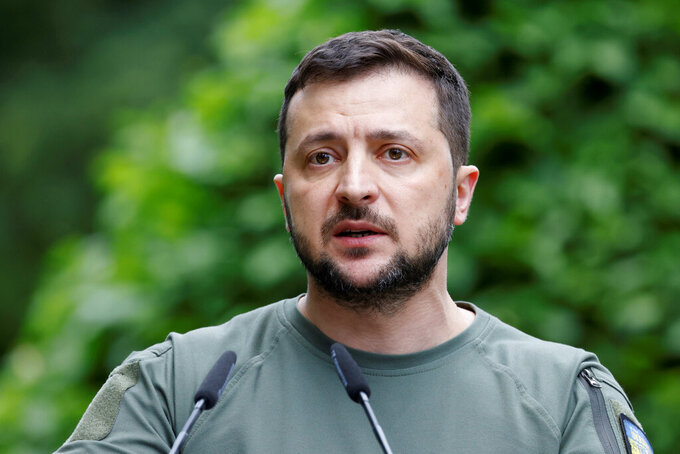 Posts mislead on photo of Zelenskyy in front of green screen

CLAIM: A photo of Ukrainian President Volodymyr Zelenskyy filming in front of a green screen shows he was “never in his own land.”

THE FACTS: The photo, taken in Kyiv last week, shows Zelenskyy filming a message that appeared as a hologram at various digital conferences. Since the beginning of the war in Ukraine, misinformation campaigns have falsely accused Zelenskyy of fleeing the country or its capital. In recent days, some social media users have misrepresented a photo of the leader filming in a studio to push the false narrative. The picture shows Zelenskyy dressed in a khaki T-shirt and standing on a set in front of a green screen. “The ukraine king was never in his own land he was using green screens.jpg,” reads the caption on the photo. One post of the photo on Twitter was retweeted over 900 times. It was also shared on Facebook. However, the photo was taken in Kyiv as Zelenskyy filmed an address that was played as a hologram at various digital technology conferences across Europe, director Martin Williams confirmed. Williams, the founder of media production company Talesmith, wrote in an email to the AP that the image was captured on June 14, and is actually a screengrab from a behind-the-scenes documentary he is making about the project. The picture was distributed in a June 16 press release about the hologram. “I directed the piece and was in the room. We built the green screen studio as part of a volumetric capture for an AR hologram,” Williams wrote. AP reporters have interviewed Zelenskyy in person in Kyiv during the war. AP reporting also shows he also visited soldiers on the front line in Kharkiv in May.

THE FACTS: The video was previously posted by a visual effects artist who has used the same background and sound effects in multiple videos, and hypersonic missile experts confirmed it does not resemble such a weapon. Throughout Russia’s war on Ukraine, social media users attempting to push certain narratives or gain followers have posted digital animations and video game sequences, misrepresenting them as combat footage. Four months into the war, another computer-generated video is circulating, this one with false claims it shows a Russian missile hitting land in Ukraine and an American journalist reacting in shock. The video shows a grassy field with a white tent and trees behind it. A white object falls from the upper right side of the sky and disappears behind the trees. A fiery explosion erupts in the distance, and a male voice shouts profanities in the background. “A Russian Kinzhal missile at 12,000 kilometers per hour, 10 times faster than the speed of sound, was used today to destroy a Ukrainian weapons depot 136 meters underground,” reads a caption shared with the video on Instagram. “The video shows the amazement of an American reporter who witnessed this.” However, an analysis of frames from the video reveals it was previously posted by a visual effects artist who goes by InsanePatient2. On YouTube and TikTok, the artist titled the video, “What if Russia Started Nuclear War?” The visual artist, who did not respond to an emailed request for comment, has posted other videos that use the same field landscape and the same audio track. Russia’s Kinzhal missile is a hypersonic missile, a class of weapons which travel at speeds akin to ballistic missiles but are difficult to shoot down because of their maneuverability. In March, Russia claimed it used the Kinzhal missile for the first time in combat, to destroy an underground warehouse storing Ukrainian missiles and aviation ammunition in Ukraine’s western Ivano-Frankivsk region. The Pentagon said at the time that the U.S. could not confirm the Russians used a hypersonic missile. Hypersonic missile experts confirmed the video circulating widely online this week did not show such a missile, because the object in the video moved too slowly. “The speed of a hypersonic missile in terminal phase (right before it hits target) is very high, greater than a mile a second,” Kelly Stephani, a mechanical science and engineering professor at the University of Illinois Urbana-Champaign wrote in an email to The Associated Press. “If I had to estimate, this video shows a projectile traveling (tilde)1000-2000 ft to target, and took 2 seconds to impact. If it were a hypersonic missile, it would have traveled that distance in a fraction of a second. “ “The real missile would be so fast that it would appear as a quick streak on video - probably captured in only a single frame,.” said Jonathan Poggie, a professor in the School of Aeronautics and Astronautics at Purdue University.

CLAIM: The head of Drag Queen Story Hour was arrested for child pornography.

THE FACTS: A man who was arrested on child pornography charges last year previously ran an organization that acted as a nonprofit fiscal sponsor for Drag Queen Story Hour’s Milwaukee chapter. But he never worked for Drag Queen Story Hour, nor did he help plan its events, according to the group’s executive director. Misleading, anti-LGBTQ rhetoric in recent months has targeted drag storytimes — kid-friendly story hours in public spaces led by performers dressed in drag — with claims that the events are abusive or harmful to children. Among the widely shared misinformation is the false claim that the head of a national organization that organizes the drag storytimes was arrested on child pornography charges. The claim appeared in headlines on conservative websites last year, and thousands of social media users have resurfaced them this week. The claims refer to Brett Blomme, a Milwaukee County Children’s Court judge, who in March 2021 was arrested and charged in state court for seven counts of possession of child pornography. Those charges were later dropped in exchange for Blomme pleading guilty in federal court to two counts of distributing child pornography. Before Blomme was elected as a judge in spring 2020, he was CEO of the Cream City Foundation, an LGBTQ nonprofit that nods to Milwaukee’s nickname as “Cream City” for its cream-colored bricks. The Cream City Foundation at the time was a nonprofit fiscal sponsor for Drag Queen Story Hour’s Milwaukee chapter, its executive director said. That relationship allowed the non-tax-exempt Drag Queen Story Hour Milwaukee to receive donations. Besides being a fiscal sponsor, the Cream City Foundation has “had no part in DQSH Milwaukee & DQSH National,” Drag Queen Story Hour Executive Director Jonathan Hamilt told The Associated Press in an email. “DQSH Milwaukee has never been run by the Cream City Foundation nor Brett Blomme, nor have either participated in planning, organizing, hosting or performing at any of our events. Brett has never held a title or position within our organization ever.” Cream City Foundation confirmed these details. In an emailed statement, it said the fiscal agency agreement between the two entities was “purely transactional.” Hamilt said Drag Queen Story Hour condemns pedophilia and is “angry and outraged” by Blomme’s actions. After Blomme’s arrest in 2021, the Cream City Foundation published a statement saying it was “deeply troubled, angered and shocked to learn of the allegations involving our former CEO.” In December 2021, a federal judge sentenced Blomme to nine years in prison for distributing child pornography. Blomme apologized in court, acknowledging his crimes were “disgusting and outrageous.”

Video shows dead sheep in the country of Georgia, not Idaho

CLAIM: A video shows sheep in Idaho who dropped dead a week after thousands of cattle died in Kansas.

THE FACTS: While the video does show dead sheep, the footage was actually recorded in August 2021 in the nation of Georgia. After a video of cattle apparently killed by heat stress in southwestern Kansas drew attention last week, social media users are sharing the sheep footage, falsely claiming it was recorded in Idaho in recent days. Some users also suggested that there was a link between the two incidents, and that the deaths were intentional. In the video, dozens of sheep can be seen lying motionless on rocky ground surrounded by hills. “Who is doing this?” wrote one Twitter user in a post that was shared over 8,000 times, while also falsely claiming it happened in Idaho. But the video doesn’t show Idaho, nor was it recorded this month. It was filmed on Aug. 9, 2021, on a mountain in southern Georgia, according to Rima Gharibyan, editor of the Georgian media outlet Jnews, which published the footage at the time. The footage was provided by Yagor Levanov, the son of a farmer who owned deceased sheep, Gharibyan said. Jnews reported at the time that a thunderstorm killed the sheep. Gharibyan said that local authorities came to the same conclusion. Government officials with Ninotsminda, a municipality in southern Georgia, did not respond to the AP’s requests for comment. At least 2,000 cattle died in feedlots in southwestern Kansas last week, according to officials. While video of the lifeless livestock piled in rows spurred a variety of baseless and conspiratorial claims about mass killings, experts said a fatal combination of soaring temperatures, high humidity and little wind were to blame, the AP reported. “This was a true weather event — it was isolated to a specific region in southwestern Kansas,” A.J. Tarpoff, a cattle veterinarian with Kansas State University, told the AP last week.

CLAIM: The Atlantic published an article with the headline, “The Heroism of Biden’s Bike Fall” after President Joe Biden fell on Saturday as he tried to dismount his bicycle.

THE FACTS: The Atlantic did not publish such an article, a spokesperson for the media outlet confirmed to The Associated Press. A screenshot purporting to show the headline is fabricated. Following Biden’s fall at the end of a bike ride on June 18 at Cape Henlopen State Park near his beach home in Delaware, an image of the bogus article circulated widely on social media. The image resembles a screenshot of The Atlantic’s website, and features the media outlet’s logo and text such as “Subscribe” and “THE ATLANTIC DAILY,” in an apparent reference to one of the outlet’s newsletters. “The Heroism of Biden’s Bike Fall,” the headline in the image reads. Below the headline is the text, “The President gracefully illustrated an important lesson for all Americans – when we fall, we must get back up.” While some social media users realized that the headline is fake, others appeared to view it as authentic. No such story or headline can be found on The Atlantic’s website, or in archived versions of the site from June 18 captured by the Internet Archive’s Wayback Machine. Anna Bross, a spokesperson for The Atlantic, confirmed in an email to the AP that the supposed story is fake. “I can verify that this is not a real article from The Atlantic, and is indeed fabricated,” Bross wrote. Biden fell after he pedaled over to a crowd of well-wishers standing by the trail and tried to dismount his bike, the AP reported. He wasn’t hurt by the fall and told reporters that he got his foot “caught” in the toe cages.