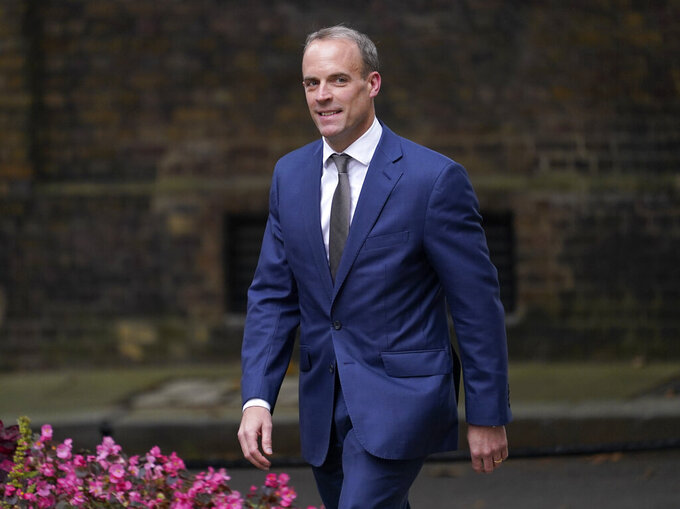 LONDON (AP) — British Prime Minister Boris Johnson demoted his top diplomat and fired his education minister in a major government shakeup Wednesday, as he tried to move on from a series of political missteps and revive his promise to “level up” prosperity across the U.K.

In the biggest move, Johnson demoted Foreign Secretary Dominic Raab, who has faced criticism for delaying his return from a holiday in Greece as the Taliban took over Afghanistan last month.

Raab was appointed justice secretary with the added title of deputy prime minister. Despite the grand title, that is a demotion — the deputy has no formal constitutional role.

The new foreign minister is ex-International Trade Secretary Liz Truss, a favorite of the Conservative Party's grassroots who has won praise for her work negotiating trade deals with Australia and Japan since Britain left the European Union last year. Truss, who is Britain's second female foreign secretary, will also remain minister for women and equalities.

There were no other changes to the top four Cabinet posts, with Rishi Sunak remaining Treasury chief and Priti Patel staying as Home Secretary. Defense Secretary Ben Wallace also kept his job. He has been praised for his work overseeing the evacuation of thousands of British citizens and their Afghan allies from Kabul last month.

Johnson fired Education Secretary Gavin Williamson, who has been criticized for his performance during the pandemic, which has seen long periods of school closures, sudden policy shifts and the cancelation of major exams to get into university two years in a row.

Williamson was replaced by Nadhim Zahawi, who has served as vaccines minister, responsible for inoculating the country against the coronavirus.

Michael Gove, a longtime ally and sometime rival of Johnson, was appointed Secretary of State for Housing, Communities and Local Government. The department is key to Johnson's aim of “leveling up” the U.K., spreading prosperity beyond the wealthy south that is the traditional Conservative heartland. That promise helped Johnson win a big election victory in 2019 by winning votes in Labour Party-dominated parts of the north of England.

Nadine Dorries was promoted to head the Department for Culture, Media and Sport, a position that will see her grapple with thorny issues such as the future of the publicly funded BBC. An outspoken politician who has often made headlines, Dorries has criticized “left wing snowflakes,” and in 2012 was suspended by the Conservative Party for taking time out from her job as a lawmaker to appear on the reality TV show “I'm a Celebrity ... Get Me Out of Here," filmed in Australia.

Johnson last made big changes in his Cabinet soon after his December 2019 election victory, when he sidelined lawmakers considered insufficiently loyal or lukewarm in their support for Brexit. That left him with a strongly pro-Brexit top team, but critics say it left many ambitious and competent lawmakers out of the government.

Opponents of Johnson's Conservative government say that lack of depth has shown as the U.K. confronted the aftershocks of its departure from the EU along with the public health crisis of the coronavirus pandemic and its resulting economic blows. Britain has recorded more than 134,000 COVID-19 deaths, the highest toll in Europe after Russia.

Johnson’s office said the prime minister’s changes on Wednesday would lead to “a strong and united team to build back better from the pandemic.”

The Cabinet shuffle is due to continue on Thursday.