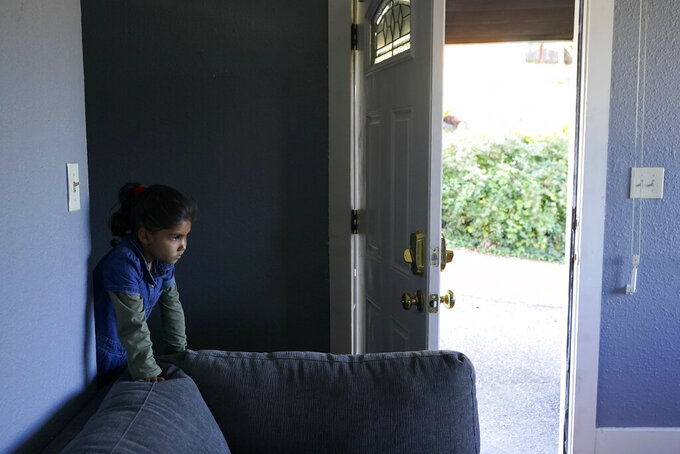 Ted S. Warren, ASSOCIATED PRESS
One of the four children of Abdul (not shown), who worked as a mechanic before he left Kabul, Afghanistan with his family about a month ago, peers out from a staircase, Thursday, Sept. 16, 2021, in the rental house the family has been provided as a place to stay in Seattle. The home is owned by Thuy Do, who was nine years old when her family arrived in the United States from Vietnam in the 1980s. Now Do and her husband have offered their vacant rental home to refugee resettlement groups to house newly arriving Afghans in need of a place to stay. (AP Photo/Ted S. Warren)

WESTMINSTER, Calif. (AP) — In the faces of Afghans desperate to leave their country after U.S. forces withdrew, Thuy Do sees her own family, decades earlier and thousands of miles away.

A 39-year-old doctor in Seattle, Washington, Do remembers hearing how her parents sought to leave Saigon after Vietnam fell to communist rule in 1975 and the American military airlifted out allies in the final hours. It took years for her family to finally get out of the country, after several failed attempts, and make their way to the United States, carrying two sets of clothes a piece and a combined $300. When they finally arrived, she was 9 years old.

These stories and early memories drove Do and her husband Jesse Robbins to reach out to assist Afghans fleeing their country now. The couple has a vacant rental home and decided to offer it up to refugee resettlement groups, which furnished it for newly arriving Afghans in need of a place to stay.

Television images of Afghans vying for spots on U.S. military flights out of Kabul evoked memories for many Vietnamese Americans of their own attempts to escape a falling Saigon more than four decades ago. The crisis in Afghanistan has reopened painful wounds for many of the country's 2 million Vietnamese Americans and driven some elders to open up about their harrowing departures to younger generations for the first time.

It has also spurred many Vietnamese Americans to donate money to refugee resettlement groups and raise their hands to help by providing housing, furniture and legal assistance to newly arriving Afghans. Less tangible but still essential, some also said they want to offer critical guidance they know refugees and new immigrants need: how to shop at a supermarket, enroll kids in school and drive a car in the United States.

Since the Vietnam War, hundreds of thousands of Vietnamese have come to the United States, settling in communities from California to Virginia. Today, Vietnamese Americans are the sixth-largest immigrant group in the United States. Many settled in California's Orange County after arriving initially at the nearby Camp Pendleton military base and today have a strong voice in local politics.

“We lived through this and we can’t help but feel that we are brethren in our common experience,” Andrew Do, who fled Saigon with his family a day before it fell to communism and today chairs the county's board of supervisors, said during a recent press conference in the area known as “Little Saigon.”

The U.S. had long announced plans to withdraw from Afghanistan after a 20-year war. But the final exit was much more frantic, with more than 180 Afghans and 13 U.S. service members killed in an attack on the Kabul airport.

In the last two weeks of August, the U.S. evacuated 31,000 people from Afghanistan, three-quarters of them Afghans who supported American military efforts during the extensive operations. But many Afghan allies were left behind with no clear way out of the landlocked nation under strict Taliban control.

Similarly, many Vietnamese Americans recall how they couldn't get out before the impending fall of Saigon to communism. They stayed behind and faced long spells in reeducation camps in retaliation for their allegiance to the Americans who had fought in their country. Once they were allowed to return to their families, many Vietnamese left and took small boats onto the seas, hoping to escape and survive.

For some families, the journey took years and many failed attempts, which is why many Vietnamese Americans view the departure of the U.S. military from Afghanistan not as the end of the crisis, but the beginning.

“We have to remember now is the time to lay a foundation for a humanitarian crisis that may last long past the moment the last U.S. help leaves the Afghan space,” said Thanh Tan, a Seattle filmmaker who started a group for Vietnamese Americans seeking to assist Afghans called Viets4Afghans. Her own family, she said, made the trip four years after the U.S. left Vietnam. “We have to be prepared because people will do whatever it takes to survive.”

Afghans arriving in the United States may have a special status for those who supported U.S. military operations, or may have been sponsored to come by relatives already here. Others are expected to arrive as refuges or seek permission to travel to the United States under a process known as humanitarian parole and apply for asylum or other legal protection once they are here.

For parole, Afghans need the support of a U.S. citizen or legal resident, and some Vietnamese Americans have signed up to sponsor people they have never met, said Tuấn ĐinhJanelle, director of field at the Southeast Asia Resource Action Center. He said a coalition of legal and community groups has secured sponsors for 2,000 Afghans seeking parole. His sister, Vy Dinh, said she's sponsoring a family of 10 including women in danger for working in medicine and teaching. “As soon as he called, I said, ‘Yes, I am in,’” she said.

Other efforts have focused on fundraising for refugee resettlement groups. Vietnamese and Afghan American artists held a benefit concert this month in Southern California to raise money to assist Afghan refugees. The event titled “United for Love” was broadcast on Vietnamese language television and raised more than $160,000, according to Saigon Broadcasting Television Network.

It also aired on Afghan American satellite television, said Bilal Askaryar, an Afghan American advocate and spokesperson for the #WelcomeWithDignity campaign aimed at supporting asylum seekers. “They saw the need. They saw the parallels,” Askaryar said. “It's really powerful to see that they saw that link of common humanity between the Afghan community and the Vietnamese community. We've been really touched and inspired.”

Thi Do, an immigration attorney in Sacramento, California, said he is also doing what he can to help. He was a boy when Saigon fell and his father, who served in the South Vietnamese army, was sent to a reeducation camp. When he returned, the family set out by boat into the ocean, hoping to reach a country that would take them.

Do remembers how the boat bumped up against dead bodies floating on the water and how his father apologized for putting him and his siblings in danger before throwing overboard his ID and keys from Vietnam. “'He said, ‘I would rather die here than go back there,’” Do said. They eventually reached Thailand and Malaysia, both countries that forced them back out to sea until they got to Indonesia and were processed at a refugee camp.

Decades later, Do said he has helped people fleeing persecution in his work as a lawyer, but until now nothing that has reminded him so much of Vietnam. He's working with Afghan families who are filing petitions to bring their relatives here, but what happens next is complicated with no U.S. embassy in Kabul to process the papers and no guarantee the relatives will make it to a third country to get them.

“I see a lot of myself in those children who were running on the tarmac at the airport,” he said.