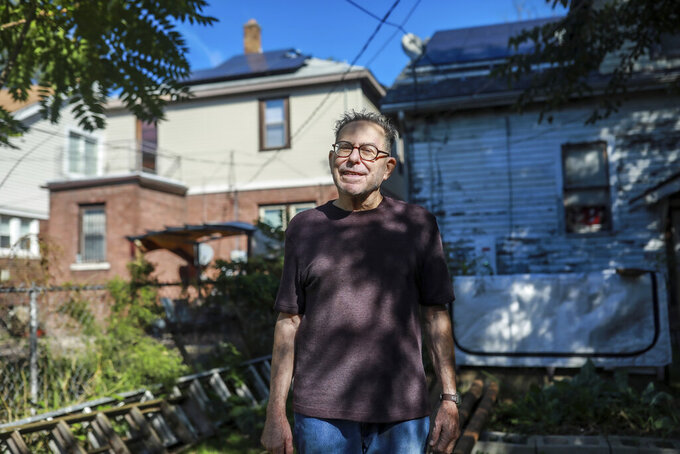 Kimberly P. Mitchell, ASSOCIATED PRESS
Community Treehouse Center Detroit is fulfilling its plan to install solar panels into 25 homes in the Jefferson Chalmers neighborhood, where Karl Shachter, 72, lives and is photographed on Wednesday, Oct. 20, 2021. The organization has made it possible for Detroit residents to receive an affordable solar energy option with a buy-in of $2000, with the organization covering the rest. The plan is called the Global Treehouse Initiative 2. (Kimberly P. Mitchell/Detroit Free Press via AP)

DETROIT (AP) — Detroit homeowner Karl Schachter has always been interested in solar energy, but the cost of the expensive installation always made the switch feel out of reach.

It didn’t seem feasible until Schachter’s neighbor Tammy Black reached out to him about an affordable solar panel option, which was through the grassroots organization Community Treehouse Center Detroit and the company Global Treehouse Initiative 2, both led by Black.

Schachter, 72, has now been using a hybrid solar power system for two years. He provides space for his friends to live with him. They are all on fixed incomes, so the solar energy installation has created a positive impact, the Detroit Free Press reports.

“It has a pretty big offset on the electric part of our utility bill,” Schachter said. “This is judging from several bills that we’ve been given in the past that we are saving anywhere between $25 and $35 a month on electricity.”

The Community Treehouse Center Detroit was created to assist residents like Schachter help the environment and have access to solar power energy, which lowers gas and electric bills for Detroit residents. The project is led by Black, who was inspired by the Pete Nelson Treehouse Project that creates solar-powered community centers.

“In the community, renewable energy is not afforded by everyone because it’s expensive,” said Black, 58, of Detroit. “So why can’t it be in low income areas? Why can’t it be the middle class who wants it and who needs it? Some of my seniors, they’re making the decision of do I pay my DTE bill or do I get my medicine? That shouldn’t be (choices) that they have to make.”

The project’s goal is to provide 25 Detroit homes in the Jefferson Chalmers neighborhood with solar panel installation, upkeep and education. So far, 19 homes have received a hybrid solar panel system, which provides a connection to solar energy and backup power.

And it’s not just about saving money for the residents. It’s also about helping the environment.

“There are some people, like myself, who are motivated by more long-range concern — not simply saving money on the electric bill, but also making this world livable in terms of how energy gets used and produced,” said Schachter who hopes to add more solar panels to his home in the future.

Black’s solar power company, Global Treehouse Initiative 2, aims to educate youths and the community in the fundamentals of renewable energy. The company focuses on providing affordable solar options for residential homes, while another company will focus on the nonprofit’s commercial projects.

A team of young people — Black calls them “my babies” — is focused on flipping houses, community gardening and fundraising. Kids will have the opportunity to follow a Realtor through the house flipping process from renovating the home to staging the home to sell.

“Once they put (the house) back together, they’re going to get 5% of whatever that house sells for,” Black said. “They can work together as a team, and this gives them collaboration skills.”

Jefferson Chalmers, located on Detroit’s east side, has a country feel with a lot of open space, Black said. The houses are spaced out. There are spaces to create gardens. These features attracted Black to live in the neighborhood.

Over the years, she began to crave reducing the stress of her neighbors by lowering their energy bills, creating a community and educating everyone in her path.

“When you can see people not stressed about their living, or smiling sometimes, when you know they wouldn’t smile,” Black said. “My living is not in vain when I see that. It makes me feel great to know that when I leave this Earth, that I have made an impact on somebody’s life.”

Residents who are a part of the nonprofit’s program have to pay $2,000, and the rest is covered by the nonprofit. It has taken the nonprofit $250,000 to complete this project, with a $25,000 donation from Hammond Climate Solutions’ Solar Moonlight Program and a major finance and working partnership with Distributed Power. With the help of the city’s inspectors, all of the 25 homes should have solar power by the end of November. There are also plans to continue with fundraising to provide a backup battery for the participating residents.

“We’re going to start fundraising to get the panels for the power station and the actual housing for the components that we need to make this happen,” Black said. “We’re hoping that people who are really into renewable energy would be kind enough to donate this.”

The typical cost of a solar panel installation is between $13,260 to $17,940, according to Energy Sage. And it takes about 10.52 years to receive an energy payback on the initial investment. In Michigan, about 8,000 customers are using some form of distributed generation like solar energy, according to the Michigan Public Service Commission. The most customers in Michigan with solar energy installed are in Wayne, Washtenaw, Oakland and Isabella counties, according to that same report from 2019.

“Solar energy, as a renewable energy, it’s reducing our reliance on fossil fuels,” said Mills, who is a senior project manager and is a lecturer within the Graham Sustainability Institute. “At the neighborhood level, residents who have solar energy are able to produce some of their own power.”

Michigan, as we know, produces many snowy and dreary days. Mills said that these weather conditions can cause solar panels to produce less power since the panels are on the top of the roof. But even on those days, 70% of the power will come from solar in Detroit compared with a 100% solar energy day in Phoenix, Mills said.

“One of the things that I’m looking forward to is solar panels that are distributed throughout communities, throughout a neighborhood, really, have the opportunity — if we’re able to connect the grid right — to allow for some additional resilience,” Mills said. “If there’s a storm, and we know that there will be increasing storms from climate change, and trees take down some power lines, having this energy production distributed throughout the community really provides an opportunity for resilience.”

Black said the organization has plans to create a power station in the neighborhood, as well, bringing about 300 solar panels to a piece of land. This solar panel farm will operate during DTE Energy’s peak time — the time in which more energy is used between the hours of 3 p.m. to 7 p.m.

Global Treehouse Initiative 2 is planning outreach in other communities once it has finished the installation of solar panels in the Jefferson Chalmers neighborhood.

The 700-square foot building will be fully solar powered, with wheelchair accessible features. There is a long list of programming that currently takes place, from gardening to assisting seniors, and it will be available at the treehouse once it is built. Mental health professionals will also be on-site for people experiencing depression and anxiety, or for people who might just need someone to talk to.

The solar project joins other projects in the Jefferson Chalmers neighborhood. The Neighborhood Grocery continues its construction phase, which Black’s nonprofit is investing $10,000 in, and the Neighborhood Resource Hub continues to provide education to the area.