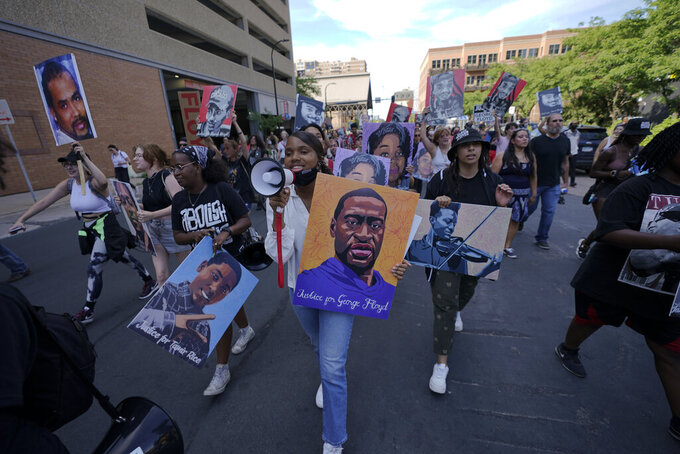 Julio Cortez, ASSOCIATED PRESS
FILE - In this June 25, 2021 file photo a small group of protesters marches after former Minneapolis police officer Derek Chauvin was sentenced to 22.5 years in prison for the murder of George Floyd, in downtown Minneapolis. A judge has suspended Minnesota's new stricter standards on when police can use deadly force, halting a change in state law that followed the death of George Floyd while in custody of Minneapolis police. (AP Photo/Julio Cortez File)

ST. PAUL, Minn. (AP) — A judge has suspended Minnesota’s new stricter standards on when police can use deadly force, halting a change in state law that followed the death of George Floyd while in custody of Minneapolis police.

The new standards, passed by the Legislature in 2020, raised the bar on officers to justify in specific terms how their actions involving lethal force were necessary.

Several law enforcement lobbying groups filed a legal challenge to get the law tossed out or at least suspended until more officers could be trained on the new expectations.

Ramsey County Judge Leonardo Castro on Monday ruled that the changes to the law will be put on hold until the lawsuit is complete and that the use of force conditions will revert to those that were in place before the new law went into effect in March. Castro said oral arguments will take place within 60 days, the Star Tribune reported.

“The public policy implications are severe, and it is imperative that we get this right,” Castro wrote in his order.