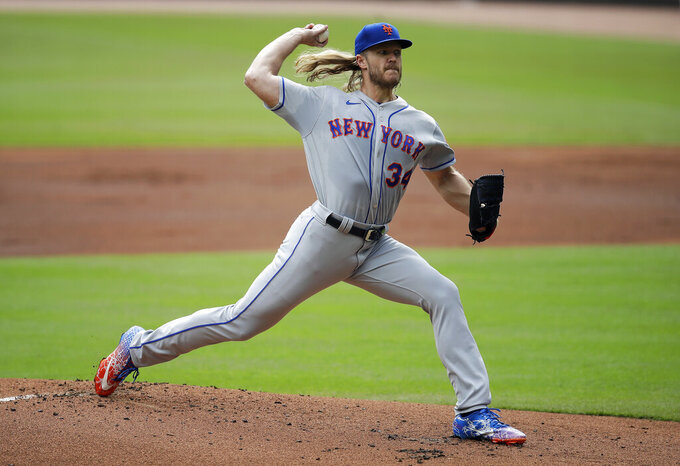 ANAHEIM, Calif. (AP) — Noah Syndergaard got a qualifying offer and not much else from the New York Mets over the past two months.

The imposing right-hander known as Thor said Friday he was thrilled to land with the Halos on a $21 million, one-year deal. He sees the move as an opportunity to reestablish himself as an elite starter after being limited by injuries and surgery to two brief appearances over the past two seasons.

“I think if I get back to my old self, then the combination one-two punch with myself and Shohei, and all the young talent that the Angels have, I think we can really make a run at this thing,” Syndergaard said.

Syndergaard was immediately full of praise for the Angels’ two MVPs, calling Ohtani “the most exciting player in the game" and Trout “the best player the game has ever seen, so I want to help get him a ring.”

Syndergaard had spent his entire big league career with the Mets, but he feels the organization was preoccupied with replacing its front office while his future was up in the air.

“I didn’t really hear from them all that much in the last two months from the end of the season until now,” he said. "I understand they had a lot on their plates.”

Syndergaard still said leaving New York was “the hardest decision of my life. But I definitely think that I made the right decision.”

The Mets' organizational upheaval was “definitely in the back of my mind a little bit,” Syndergaard added. “This is an important year for me. This is kind of a make-or-break time for me. I didn’t want to gamble on that kind of uncertainty that’s been going on with them."

New York hired former Angels general manager Billy Eppler this week, but Syndergaard was already headed to the West Coast to join the Angels, who are desperate to end their skids of six straight losing seasons and seven straight non-playoff campaigns.

Syndergaard said Angels GM Perry Minasian pursued him ardently from the opening hours of free agency. The executive won him over at dinner in New York with his agent, presenting a detailed plan for the upcoming season and showing impressive knowledge of Syndergaard's pitching mechanics, right down to identifying specific changes Syndergaard was already considering to improve his delivery.

“I could just sense his passion, his desire to win right now, and that got me really fired up,” Syndergaard said.

The talent on the Angels' roster also impressed Syndergaard, even though the club hasn't done much with it in recent years largely because it has long lacked quality starting pitching. Minasian is determined to change that, and he felt Syndergaard was a potential ace who would be available if the Angels were aggressive and financially generous.

“When he’s right, he’s one of the better pitchers in the game,” Minasian said. “He’s one of those guys, you want to give him the ball in big spots. The aggressiveness he pitches with, the moxie, I think complements our rotation really well. ... It’s somewhat flattering, the fact that he picked us. It’s a partnership. We’re betting on him, and he’s betting on us. He is not coming here to lose."

Syndergaard said he expects to be on an overall innings limit, although a number hasn't been chosen. The Angels intend to use a six-man rotation again this year as part of their usual plan to maximize Ohtani's two-way abilities, so a slightly limited number of starts should help Syndergaard in his full return from Tommy John surgery.

Minasian isn't done shopping for starters, saying he “would like to add multiples.” Behind Ohtani and Syndergaard, Patrick Sandoval and José Suárez appeared to pitch their way into 2022 rotation spots last year, but the rest of the group is in flux.

But the Angels have already made what's likely to be the most important purchase in their offseason shopping. Syndergaard said he'll move to the Newport Beach area quickly to begin his offseason throwing program and to start “soaking up that sunshine.”