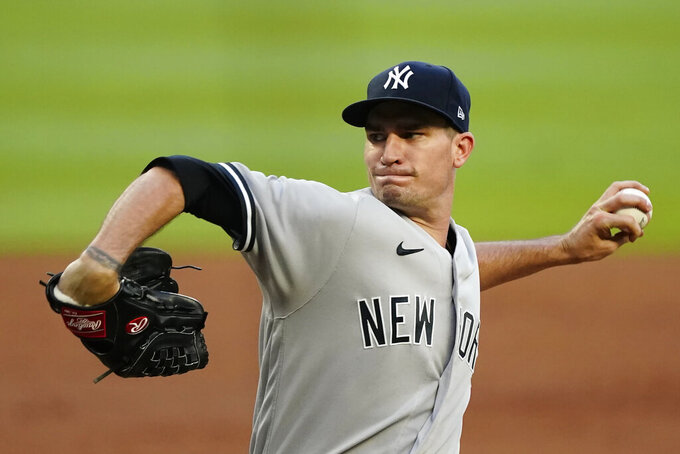 John Bazemore, ASSOCIATED PRESS
FILE - New York Yankees starting pitcher Andrew Heaney works against the Atlanta Braves in the first inning of a baseball game Tuesday, Aug. 24, 2021, in Atlanta. The Los Angeles Dodgers have agreed to an $8.5 million, one-year contract with free agent left-hander Heaney, according to a person with knowledge of the deal. The person spoke to The Associated Press on condition of anonymity because the agreement had not been announced. The 30-year-old Heaney split 2021 between the Los Angeles Angels and the Yankees, going 8-9 with a 5.83 ERA. (AP Photo/John Bazemore, File)

Heaney’s peripheral numbers were better than his ERA, with 150 strikeouts and 41 walks over 129 2/3 innings, sparking speculation he could improve in 2022.

Right-hander Walker Buehler and left-hander Julio Urías are projected for the Dodgers' rotation next season. Urías was the majors' lone 20-game winner this year.

The team didn't extend an $18.4 million qualifying offer to three-time Cy Young Award winner Clayton Kershaw after left forearm inflammation kept him out of the postseason. It's possible he could return, along with Max Scherzer, who at 37 is a candidate to win his fourth Cy Young Award. Kershaw and Scherzer both became free agents.

Heaney pitched for the Angels from 2015-21. He was very briefly a Dodger before that; Los Angeles acquired him from Miami on Dec. 11, 2014, along with Kiké Hernández and Austin Barnes, then shipped him that same day to Anaheim for Howie Kendrick.

Heaney refused an outright minor league assignment from the Yankees on Oct. 7 and became a free agent. He made $6.75 million last season.