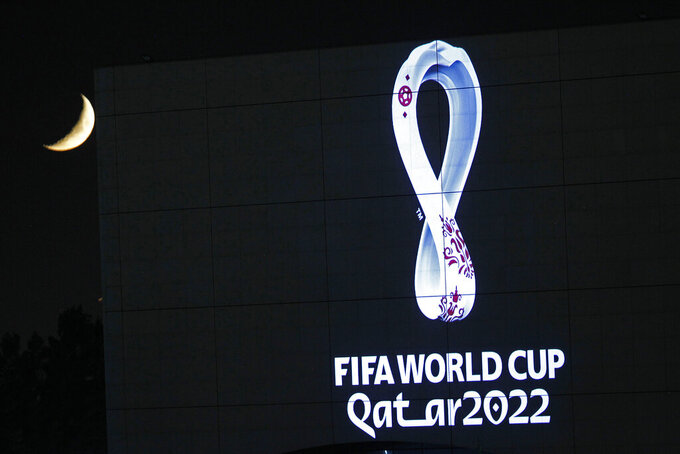 Toufik Doudou, ASSOCIATED PRESS
FILE - The 2022 Qatar World Cup logo is projected on the opera house of Algiers, Tuesday Sept. 3, 2019. An ambassador for the World Cup in Qatar has described homosexuality as a “damage in the mind” in an interview with German public broadcaster ZDF just two weeks before the opening of the global soccer tournament in the Gulf state. (AP Photo/Toufik Doudou)

BERLIN (AP) — An ambassador for the World Cup in Qatar has described homosexuality as a “damage in the mind” in an interview with German public broadcaster ZDF only two weeks before the opening of the soccer tournament in the Gulf state, highlighting concerns about the conservative country’s treatment of gays and lesbians.

Former Qatari national team player Khalid Salman told a German reporter in an interview that being gay is “haram,” or forbidden in Arabic, and that he has a problem with children seeing gay people.

Excerpts of the television interview were shown Monday on the ZDF news program Heute Journal. The full interview, which is part of a documentary, will be shown Tuesday on ZDF.

“Of course such comments are terrible, and that is the reason why we are working on things in Qatar hopefully improving,” Nancy Faeser said Tuesday.

About 1.2 million international visitors are expected in Qatar for the tournament, which has faced criticism and skepticism ever since the gas-rich emirate was selected as host by FIFA in December 2010. Concerns about LGBTQ tourists attending the World Cup have also been expressed for a long time.

In the interview, Salman also said that homosexuality “is a spiritual harm.”

“During the World Cup, many things will come here to the country. Let’s talk about gays,” Salman said in English, which is simultaneously dubbed into German in the TV segment. “The most important thing is, everybody will accept that they come here. But they will have to accept our rules.”

The interview was cut short by a media officer of the World Cup organizing committee after Salman expressed his views on homosexuals, ZDF reported.

Faeser, who is also responsible for sports, said when she visited Qatar a week ago that the country’s prime minister had given her a “safety guarantee” for fans “no matter where they come from, whom they love and what they believe in.”

Faeser said there has been no change to that stance from the prime minister, who is also Qatar’s interior minister. She plans to go ahead with a trip to Germany’s opening World Cup match against Japan.

Last month, Germany's ambassador to Qatar was summoned by the government there after Faeser appeared to criticize the country for its human rights record.

“We have a relationship with Qatar that allows us to discuss our areas of mutual interest, but it also allows us to discuss what is important with the United States and values of tolerance, diversity, of respecting all people regardless of who they are or whom they love,” Price said. "I suspect we’ll be addressing that directly.”