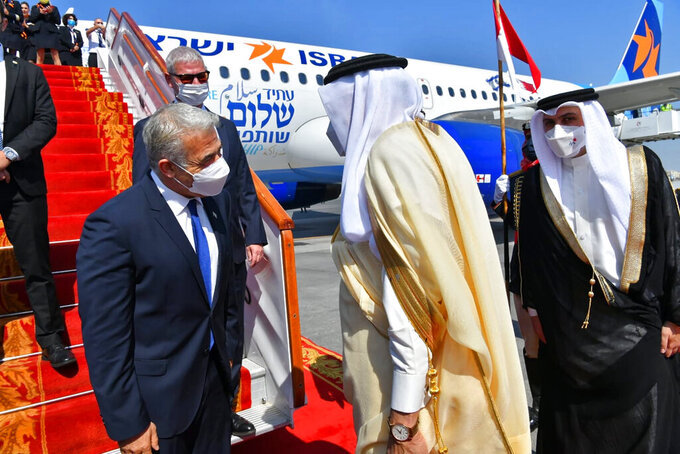 JERUSALEM (AP) — Israel and Bahrain cemented their year-old agreement to establish diplomatic ties on Thursday, with the king of the small Gulf Arab state hosting Israel's foreign minister who for the first time opened an embassy in the capital of Manama.

Bahrain's carrier Gulf Air was met at Ben Gurion International Airport with a water salute and a ribbon-cutting ceremony.

The festivities reinforced the accord between Israel and the island nation, one of four Arab states that signed onto the U.S.-brokered “Abraham Accords.” Lapid has already visited the United Arab Emirates and Morocco and opened Israel's diplomatic offices in those two countries since he became foreign minister in June.

During his meeting with Lapid, King Hamad hailed the normalization agreement as a “historical achievement on the road to just and lasting peace in the Middle East,” state-run Bahrain News Agency reported.

“The launch of the first flight brings new and exciting opportunities between our countries and allows our peoples to finally meet and build connections that will create a brighter future,” said Undersecretary of Bahrain Civil Aviation Affair, Mohammed Thamir Al Kaabi.

The Israeli diplomatic delegation and its Bahraini counterparts were to sign a raft of agreements to further cement bilateral ties, including economic deals and cooperation between hospitals and water companies. The two countries had long enjoyed clandestine security ties over a shared distrust of regional rival Iran, but only last year took the relationship public.

“We see Bahrain as an important partner, both in the bilateral level but also as a bridge to cooperation with other countries in the region,” said Lior Haiat, spokesman for the Foreign Ministry.

Lapid said in a statement that the Israeli delegation and Bahraini officials "talked about the cooperation between our countries and about taking the official peace between us and turning it into an active, economic, security, political and civic friendship.”

Bahrain’s first ambassador to Israel arrived earlier this month and presented his credentials to Israel’s figurehead president on the anniversary of the signing of the accords.

The deals to establish relations with Bahrain, Sudan, Morocco and the UAE were the first peace accords between Israel and Arab states in decades, after peace treaties with Egypt in 1979 and Jordan in 1995.

The deals enraged the Palestinians, who felt a betrayal of their national cause. They saw it as an abandonment of a longstanding commitment in the Arab world not to normalize relations with Israel until there was progress in resolving the decades-long conflict with the Palestinians.

Normalization with Israel remains a contentious issue for Bahrain’s Shiite majority, which long has accused the country’s Sunni Muslim rulers of treating them like second-class citizens. While opposition voices have largely been silenced in the country, Bahraini activists on Thursday shared footage purporting to show small-scale protests in Manama, where at least one demonstrator could be seen burning an Israeli flag.

The banned Shiite opposition group al-Wefaq condemned Lapid’s visit in a statement and urged Bahrainis to express their opposition. The kingdom, the strategically located home port for the U.S. Navy’s 5th Fleet, has long blamed Iran for stoking dissent on the island — a charge that Tehran denies.

The Israeli delegation arrived earlier this week and joined Bahrain’s tiny Jewish community in marking the Jewish holiday of Simchat Torah. Haiat said it was the first time in over 75 years that the community could mark the holiday in its synagogue.

“The fact that we could celebrate it yesterday was a very joyful event for us and for the community as well,” he said.