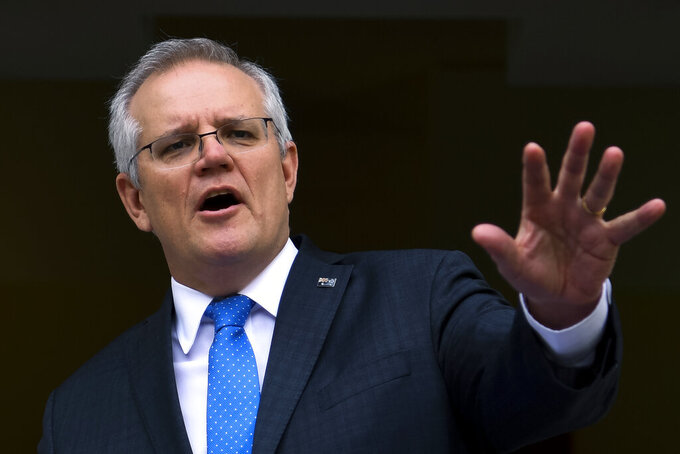 CANBERRA, Australia (AP) — Australia's government confirmed Thursday that it refused to allow climate change goals to be written into a proposed free trade deal with Britain, as pressure mounts on it to make more ambitious commitments to cut carbon emissions.

“It wasn’t a climate agreement; it was a trade agreement,” Morrison said.

British ministers had agreed to bow to pressure from Australia to drop binding commitments to the Paris climate change agreement from the bilateral trade deal, Sky News reported citing an email from an unnamed British official sent last month.

The report angered environmentalists who questioned Britain’s commitment to curbing greenhouse gas emissions ahead of hosting a U.N. climate summit, known as COP26, in Scotland in November.

“This agreement recognizes we’re signed up to Paris and that we’ll meet our Paris targets, which we will do hands down,” Tehan told Radio 4BC.

“We got a fantastic outcome both for Australia and the U.K. in that F.T.A., which we’re seeking to finalize at the moment,” Tehan added, referring to a free trade agreement.

Reducing emissions is a politically fraught issue in Australia, which is one of the world's largest exporters of coal and liquified natural gas. The nation is also one of the world’s worst greenhouse gas emitters per capita because of its heavy reliance on coal-fired power.

Resources Minister Keith Pitt said in a statement on Thursday that coal remained Australia’s largest export after iron ore and “that won’t be changing any time soon.”

Australia has not budged from its 2015 pledge at the Paris climate conference to reduce emissions by 26% to 28% below 2005 levels by 2030 ahead of climate talks in Glasgow.

The conservative government aims to reduce emissions to net-zero and preferably by 2050, but won’t commit to that target.

“The Paris commitments are something that Australia has signed up to, but which Australia continues to sit in the naughty corner with the rest of the world,” Albanese said.

“The whole world has signed up to net-zero emissions by 2050. Scott Morrison continues to be a recalcitrant when it comes to climate change action,” Albanese added.

“The Morrison government is resorting to sleazy backroom deals and pressure tactics to shirk the commitments it has made to the world on climate change,” Ritter said in a statement.