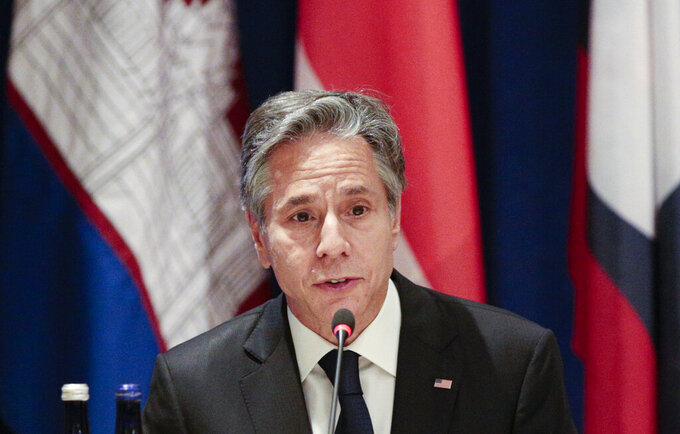 Kena Betancur, ASSOCIATED PRESS
US Secretary of State Antony Blinken meets with Foreign Ministers of the ASEAN Nations on Thursday, Sept. 23, 2021, on the sidelines of the U.N. General Assembly at United Nations headquarters in New York, (Kena Betancur/Pool Photo via AP)

NEW YORK (AP) — The Biden administration is imploring Iran to quickly return to talks on its nuclear program after a three-month hiatus caused by its government transition, warning that the window for negotiations may soon close.

Secretary of State Antony Blinken and a senior administration official said Thursday that U.S. patience is wearing thin and that further delays while Iran continues to expand its atomic capabilities could lead Washington and its partners to conclude a return to the landmark 2015 nuclear deal is no longer worthwhile.

“We don’t have yet an agreement by Iran to return to the talks in Vienna,” Blinken said. “We are very much prepared to return to Vienna and continue the talks. The question is whether, and if so when, Iran is prepared to do that.”

Blinken and the senior official, who briefed reporters on condition that he not be identified by name, spoke as diplomats from the remaining parties to the agreement have been meeting Iran’s foreign minister on the sidelines of the annual U.N. General Assembly to gauge Tehran’s willingness to return to the talks.

While Iran has said it is ready to rejoin the talks, it has not yet offered a date for a resumption, named a negotiating team or indicated that it is willing to pick up where the negotiations left off in June, according to the officials.

In discussions with representatives from the remaining parties to the deal — Britain, France, Germany, Russia, China and the European Union — the officials said all of them had agreed on the importance of resuming the talks as soon as possible.

If the talks don't resume, the officials said the U.S. would at some point determine that Iran was no longer interested in the benefits that the accord offered or that its recent technological advances could not be undone by the limits it imposed.

The UN's atomic watchdog has said Iran is increasingly in violation of the deal, known as the Joint Comprehensive Plan of Action or JCPOA, which former President Donald Trump withdrew the U.S. from in 2018. The U.S. has participated indirectly in the Vienna talks, which were aimed at bringing both Washington and Tehran back into compliance with the deal.

Borrell stressed “the need for full cooperation” from Iran and reiterated his concern about the overall trajectory of the Iranian nuclear program,” the EU statement said.

The last round of talks in Vienna ended in June, ahead of Iran’s elections that boosted the ranks of hard-liners. There had been speculation that the remaining parties to the deal would meet on the sidelines of this week’s U.N. General Assembly. But the U.S. official said Iran had declined the opportunity to meet.