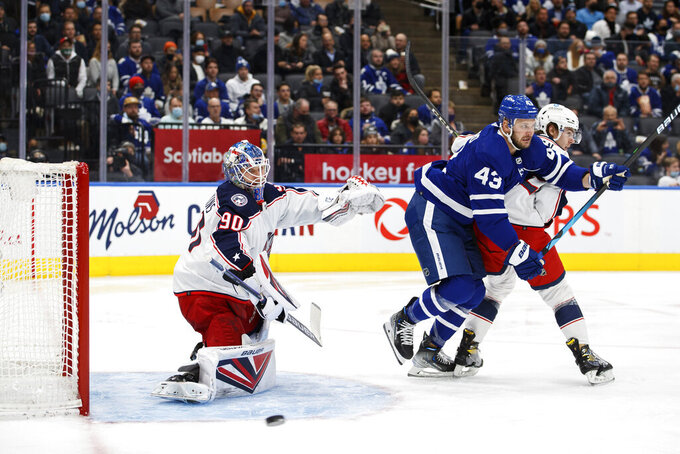 Rielly set up power-play goals by William Nylander and captain John Tavares, and two more from Matthews. His second goal came seven seconds after Tavares put the Maple Leafs in front 4-1 late in the second period.

Nick Ritchie scored his first goal in his 27th game with Toronto before 18,793 at Scotiabank Arena. Jack Campbell made 28 saves for his NHL-leading 14th win.

Ritchie hadn't scored since the playoff opener for Boston last May 15. His teammates appeared even more excited than him after his goal late in the first period.

“It’s been a while,” said Ritchie, who had 15 goals for the Bruins last season. “It’s almost a better feeling to see how excited your team is for you.”

The Blue Jackets (13-11-0) were missing forward Patrik Laine, out with an oblique strain. They have dropped five of six.

The Maple Leafs were minus forward Mitch Marner, hurt in a collision with teammate Jake Muzzin during practice last Friday. Marner is expected to be sidelined for the next three to four weeks.

Marner was placed on injured reserve along with defenseman Rasmus Sandin on Tuesday.

Marner was absent from weekend losses at Minnesota and Winnipeg. Sandin was injured Sunday after a knee-on-knee collision with Jets defenseman Neal Pionk.

Toronto (18-7-2) also played without forward Jason Spezza (suspension) and defensemen Travis Dermott (shoulder). Spezza was banned for six games by the NHL for his knee to the head of Pionk after his collision with Sandin.

“It’s out of our hands,” Matthews said. “It’s an opportunity for others to step up.”

The Maple Leafs promoted defensemen Alex Biega and Kristians Rubins and right wing Alex Steeves to fill the roster vacancies. The 21-year-old Steeves and 23-year-old Rubins made their NHL debuts. They were free-agent signings last summer.

“That’s going to happen over the course of a season,” Rielly said. "(Marner) is a big part of our team. You have to rely on your depth.”

Steeves and Rubins wore ear-to-ear grins after their debuts. Steeves played on the fourth line with Pierre Engvall and Kyle Clifford. His parents were in town and planned to fly home Monday. But after dropping them off at the airport and arriving back home, Steeves found out he would be playing his first NHL game on Tuesday.

He was quick enough to call his parents, and they were able to get off their flight and stay to be in attendance.

“It was super special,” the New Hampshire native said. “The entire night was a welcome to the NHL for me.”

Rubins is from Latvia. He revealed his family and friends stayed up in the wee hours of the morning to watch the game on television.

Nylander gave Toronto an early 1-0 lead on the power play, resulting from swift puck movement from Rielly to Matthews to Nylander.

Matthews leads the Maple Leafs with 17 goals. He almost had a hat trick, but failed to tap home a pass from linemate Wayne Simmonds midway through the final period.

Campbell's shutout bid ended with a rebound power-play goal from Bjorkstrand, seconds after Campbell made a fantastic glove save on Bjorkstrand from in close.

Bjorkstrand scored again early in the third period. Kuraly added a goal off the rush with 3:35 remaining, and Domi scored just before the final horn.