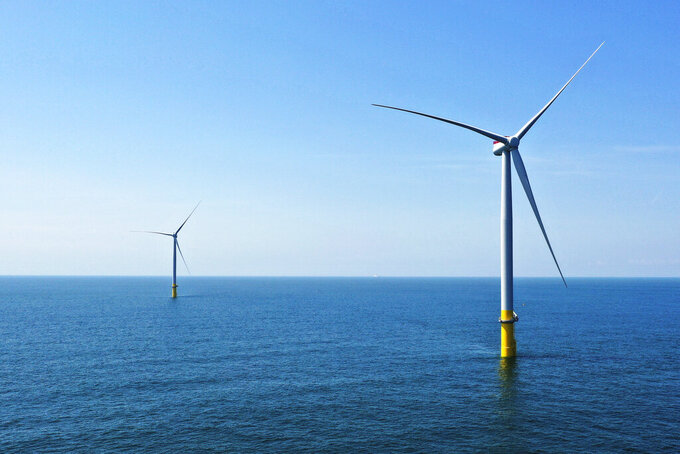 Dominion plans to erect 176 wind turbines in the Atlantic Ocean about 27 miles (43 kilometers) from the shores of Virginia Beach. The project is expected to generate enough power for about 660,000 homes.

Dominion said in a statement that the filing with Virginia's corporation commission keeps the project on schedule for completion by the end of 2026. Earlier this year, the company filed a request for federal approval through the Bureau of Ocean Energy Management.

“Our customers expect reliable, affordable, and clean energy and we intend to deliver," Dominion Energy President Robert M. Blue said in a statement. “In addition to solar, storage and nuclear, offshore wind is a key component of our strategy and a game changer for the Hampton Roads economy.”

The Virginia Clean Economy Act sets a target for Dominion Energy to construct or purchase at least 5,200 megawatts of energy through offshore wind by 2034 and to achieve 100% carbon-free energy production by 2045.

Two wind turbines stand off the Virginia Coast. They are part of Dominion's pilot project, which is the first for offshore wind in federal waters.

The project reflects plans by President Joe Biden's administration to develop enough offshore wind energy by 2030 to power 10 million American homes for a year. An estimated 80,000 jobs are expected to be created.

State officials have said the offshore wind farm off Virginia's coast is expected to support about 1,100 long-term jobs, although there will likely be about 1,500 jobs during peak construction.

The factory will be located at the Portsmouth Marine Terminal and will produce turbine blades for the project in Virginia as well as other offshore wind farms around North America.

Over the next 10 years, building and operating the offshore wind industry will be worth $109 billion to businesses in its supply chain, according to a recent report from the Special Initiative on Offshore Wind.

Dominion's pilot project off Virginia's coast is already providing useful information to the industry on anything from safety issues to coordinating with cargo ships heading for the Port of Virginia.

The company has also learned that the winds off the Virginia coast will provide slightly more energy than expected.

“So, the pilot turbines are exceeding our expectations,” he said.

This story has been edited to correct that Dominion Energy expects to generate electricity of about 43% at full load, not that the pilot turbines were operating at that percentage.