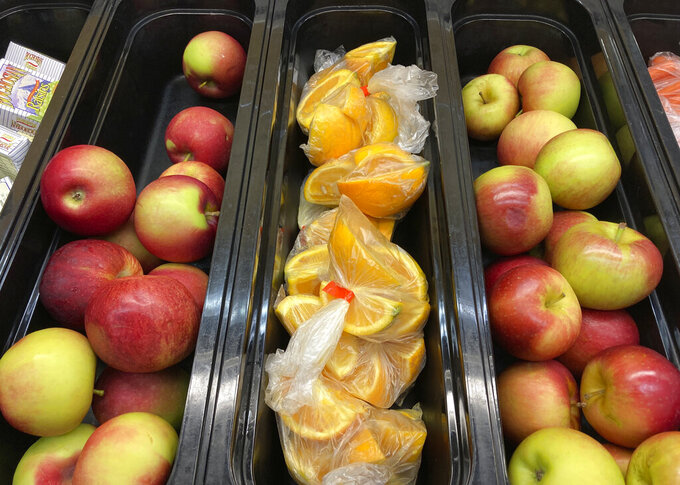 Lisa Rathke, ASSOCIATED PRESS
Apples and orange slices rest in trays for student lunch at the Albert D. Lawton Intermediate School, in Essex Junction, Vt., Thursday, June 9, 2022. The pandemic-era federal aid that made school meals available for free to all public school students — regardless of family income levels — is ending, raising fears about the effects in the upcoming school year for families already struggling with rising food and fuel costs. (AP Photo/Lisa Rathke)

ESSEX, Vt. (AP) — Before the pandemic, there was no room in the budget for Kate Murphy’s children to buy lunch at school. She and her husband would buy in bulk and make bag lunches at home. So the free school meals that were made available to students nationwide amid the crisis have brought welcome relief, especially since her husband lost his job last year at a bakery company that closed.

The free meals gave the Essex Junction, Vermont, family one less thing to worry about.

“We make just too much money (literally by just a few dollars) to qualify for free or reduced lunches and other food-related benefits, but not enough to truly ever feel financially comfortable,” Murphy, a mother of four and administrator at a trust company, said by email.

The pandemic-era federal aid that made school meals available for free to all public school students — regardless of family income levels — is ending, raising fears about the effects in the upcoming school year for families already struggling with rising food and fuel costs.

For families already strained by inflation and the end of other federal help like expanded child tax credits, advocates say cuts to the aid could mean turning more frequently to food banks.

“Families across the country are facing a very difficult reality of having to chose between feeding their kids or filling up their gas tank or purchasing medicine,” said Vince Hall, chief government relations officer for Feeding America, a nonprofit network of foodbanks.

The rules are set to revert to how they were before the coronavirus pandemic with families that are eligible based on income levels required to apply for their children to receive free or reduced-price lunch. Schools in predominantly low-income areas will be allowed to serve breakfast and lunch to everyone for free, as before.

Since waiving the eligibility requirement during the pandemic, the U.S. Agriculture Department, which oversees school meal programs, has seen the number of participating students soar.

During this past school year, about 30 million kids a day were getting free meals, compared to 20 million before the pandemic, said Cindy Long, administrator of the USDA Food and Nutrition Service.

At summer meal distributions, 1.3 billion meals and snacks were given out nationwide in fiscal year 2020 at a cost of $4.1 billion — an eightfold increase from the previous year in terms of meals and cost, according to the USDA.

A bill passed in Congress last week and signed by President Joe Biden on Saturday aims to keep the rules around summer meals programs as they have been during the pandemic so that sites can operate in any community with need, rather than just where there’s a high concentration of low-income children, and offer to-go meals. It also provides flexibility for schools to make substitutions for certain types of food without being fined if they run into supply chain problems.

Advocates say the legislation will provide relief, but the timing has caused confusion around plans for summer meal distributions.

“It’s disappointing that the extension of the summer waivers would come so late that for the most part they’re not going to be able to stem the dramatic loss in summer meal sites that are happening this summer," said Anore Horton, executive director of Hunger Free Vermont.

For the next school year, some states have taken it upon themselves to keep school meals free for all students.

California and Maine made universal meals permanent last year and Vermont, where Murphy and her family live, is continuing the free meals for all public school students for another year using surplus state education funding. In Massachusetts, House lawmakers included $110 million in the budget to extend universal school meals for another year but the Senate version did not. Now both versions are before a conference committee. In Colorado, the Legislature passed a bill to ask voters this November whether to fund free universal breakfast and lunch at schools.

At the Albert D. Lawton Intermediate School in Vermont one recent day, eighth graders picked up freshly made pizza and Caesar salad on their trays and ate lunch with friends around round tables. Students said it was important to continue to provide free meals to all students.

“Not everybody has the same situation at home and it’s hard to learn at school when you’re super hungry so I think free lunch, it makes it easier for everybody,” student Ethan Pringle said.

Not only do the free universal meals give kids nutrition so they can learn but they also provide some reliability for kids and families during what is still a challenging time, Vermont state Rep. Karen Dolan said. It also removes the stigma of being a free or reduced-price lunch kid and the embarrassment of families who can’t pay their kids’ lunch accounts, officials said.

But some officials worry about paying for meals for children from families who could easily afford them.

Vermont Republican Gov. Phil Scott supports helping those in need but “will not support imposing such taxes, which would disproportionately impact the very people we are trying to help, in order to fund meals for children of affluent families,” spokesperson Jason Maulucci said.

Families and advocates say losing universal school lunch and breakfast next year would have been hardship for families.

“Our kids have so much to worry about these days, and food shouldn’t be one of them,” Murphy said.

Associated Press reporters Sharon Lurye in New Orleans, Steve LeBlanc in Boston and Jim Anderson in Denver in contributed to this report.