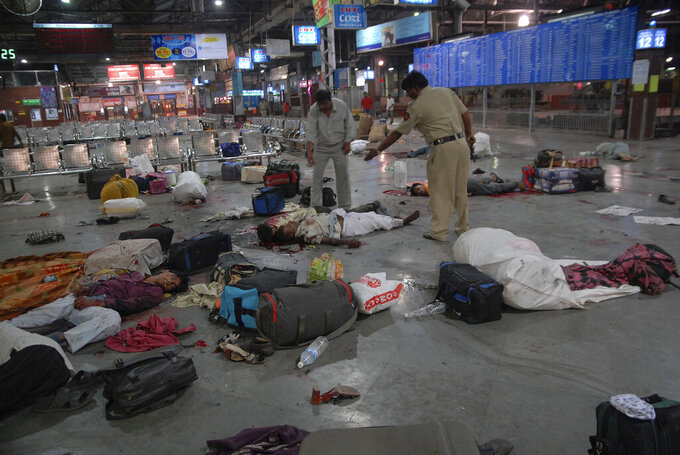 Sebastian D'souza, ASSOCIATED PRESS
FILE - In this Nov. 26, 2008 file photo, injured commuters and dead bodies lie on the floor at the Chatrapathi Sivaji Terminal railway station in Mumbai, India. Pakistan sentenced Sajid Majeed Mir, 43, one of the militants linked to the 2008 terrorist attacks in Mumbai, India to 15 years in prison for terror financing unrelated to the assaults, according to court documents viewed by The Associated Press on Monday, Jun 27, 2022. (AP Photo/Mumbai Mirror, Sebastian D'souza) INDIA OUT

ISLAMABAD (AP) — Pakistan sentenced one of the militants linked to the 2008 terrorist attacks in Mumbai, India to 15 years in prison for terror financing unrelated to the assaults, according to court documents viewed by The Associated Press on Monday.

Sajid Majeed Mir, 43, was arrested in 2020 and sentenced in May, according to the documents, but his detention and sentencing were never disclosed by Pakistan. He was sought by the FBI in connection with the 2008 attacks on India's financial hub that killed 166 people, including six Americans.

Under its Rewards for Justice program, the United States offered up to $5 million for information on Mir's alleged involvement in the attacks in neighboring India.

The court documents provided no details on Mir's involvement in terror financing.

In November 2008, a group of 10 young attackers who allegedly sailed from Karachi hijacked an Indian fishing boat, killed its captain and took a rubber dinghy into Mumbai. They then systematically attacked high-end hotels, a train station, a hospital and a Jewish community center over the course of three chaotic days. The 10 were members of Lashkar-e-Taiba, a Pakistan-based militant group, and Indian investigators later said their actions were directed by phone by handlers in Pakistan. Nine of the attackers were killed by Indian forces. Ajmal Kasab, the lone survivor, was arrested, tried and later hanged by Indian authorities.

Mir was designated a terrorist by the U.S. and was indicted in 2011. He was on the FBI's Ten Most Wanted Fugitives list.

Mir's whereabouts were not publicly known until the Pakistani newspaper The Dawn reported over the weekend that he had been quietly arrested in Gujranwala, a city in Punjab province. It said Mir's sentencing appeared to be part of efforts made by Pakistan to get off the gray list of the Financial Action Task Force.

The Paris-based group added Pakistan to the list in 2018. The “gray list” is composed of countries with a high risk of money laundering and terrorism financing but which have formally committed to working with the task force to make changes.

According to the Pakistani court documents seen by the AP, Mir was a member of a charity set up by Hafiz Saeed, who had also been designated a terrorist by the U.S. Justice Department and had a $10 million bounty on his head.

Saeed is the founder of the outlawed Lashkar-e-Taiba, of which Mir was believed to be a member. The group was active for years in the Himalayan region of Kashmir, which is split between Pakistan and India but claimed by both in its entirety.

In April, Saeed was sentenced to 31 years in prison for terror financing but he was never charged in connection with the Mumbai attacks.

Mir was sentenced to 15 years on May 16 by a court in Gujranwala, according to the documents provided to the AP by an official with the Punjab counterterrorism department. The official asked that he not be identified because he was not authorized to speak to the media.

The official said Mir planned to appeal the sentencing.

There was no immediate comment from India about Mir's sentencing in Pakistan.

Relations between Pakistan and India were strained after the attack on India’s financial hub. The rival South Asian powers have fought three wars since gaining independence from Britain in 1947, two of them over Kashmir.