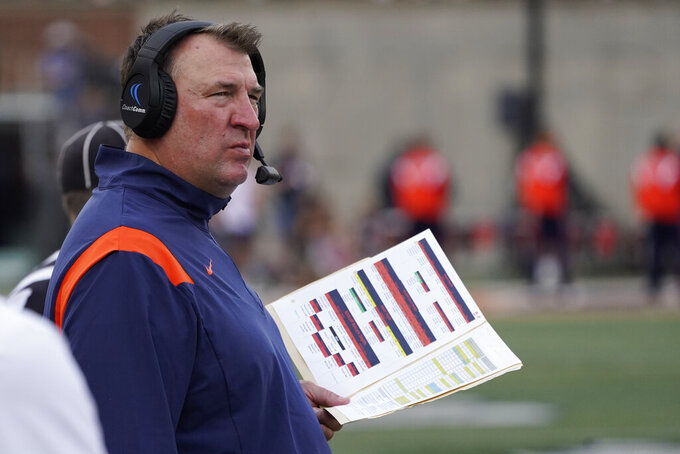 Charles Rex Arbogast, ASSOCIATED PRESS
FILE - Illinois head coach Bret Bielema looks at the scoreboard during the second half of an NCAA college football game against Wisconsin on Oct. 9, 2021, in Champaign, Ill. Bielema wants to keep the focus off himself as the former Wisconsin coach returns to Camp Randall Stadium with an opposing team for the first time since his surprising exit a decade ago. (AP Photo/Charles Rex Arbogast, File)

MADISON, Wis. (AP) — Illinois’ Bret Bielema wants to keep the focus off himself as the former Wisconsin coach returns to Camp Randall Stadium with an opposing team for the first time since his surprising exit a decade ago.

Bielema is following the same advice he gives his players.

Bielema posted a 68-24 record at Wisconsin from 2006-12 before leaving to take over Arkansas’ program at the end of the 2012 regular season as the Badgers were preparing to play in the Rose Bowl.

He will become the first coach to take an opposing Big Ten team to a school he coached to a Big Ten title since John Pont coached Northwestern in a 1973 game at Indiana. Pont had led Indiana to a share of the 1967 Big Ten crown.

Bielema’s departure caused hard feelings among Wisconsin’s fan base that might become apparent Saturday when the Fighting Illini (3-1, 0-1 Big Ten) visit the Badgers (2-2, 0-1).

Bielema was fired after going 29-34 at Arkansas from 2013-17 and got hired at Illinois in December 2020. Illinois lost 24-0 at home to Wisconsin last year in Bielema’s debut season. This will mark the first time he has coached against the Badgers at Camp Randall Stadium.

He’s matching up with a former colleague. Bielema and Wisconsin coach Paul Chryst were assistant coaches together on Barry Alvarez’s Wisconsin staff. Chryst was Bielema’s offensive coordinator at Wisconsin from 2006-11.

“I enjoyed working with him,” Chryst said. “You look back and you’re appreciative of it.”

One of Bielema’s most notable former players will be interested to see what happens.

Russell Wilson, the quarterback of Wisconsin’s 2011 Big Ten championship team, had his own bittersweet homecoming earlier this month when his Denver Broncos faced his former teammates in Seattle. When he was asked Wednesday about this game, Wilson mentioned about a dozen former Badger teammates by name.

“Coach Bielema brought those guys in,” Wilson said. “Coach Paul Chryst helped coach them up. These are pillars of success I think in college football, both of those guys. I’ve been fortunate to be around some of the greatest, in that sense. I know Coach Bielema will have a blast. He’ll be smiling a lot. He’ll be going up and down the field, chopping it up.”

Bielema’s return isn’t a big deal for Wisconsin’s current players. After all, they were in grade school when Bielema last coached here.

“I don’t really know anything about it to be honest,” Wisconsin running back Braelon Allen said this week when the topic of Bielema’s return came up.

When Allen was asked afterward whether he was aware Bielema previously had coached Wisconsin, the sophomore simply shook his head.

But the fans old enough to recall Wisconsin winning at least a share of the Big Ten title each of Bielema’s last three seasons have plenty of opinions about their former coach.

Tom Moutvic of Lake Forest, Illinois, is a Wisconsin alum and longtime season-ticket holder whose son Connor was a walk-on for the Badgers’ during Bielema’s tenure.

“You’re going to have those who felt like he left us kind of hanging,” Moutvic said. “But I think there’s others who really fully understand his overall record and what all they accomplished and respect him.”

Other fans don’t remember him quite as fondly.

Mark Von Ruden, of Madison, has missed only seven Wisconsin home games since 1995. He believes Bielema did nothing more than maintain the success predecessor Barry Alvarez already established.

Because of that, Von Ruden says he wasn’t particularly disappointed about Bielema’s departure.

“I’m indifferent to him,” Von Ruden said. “It’s been so long ago. It would have been different if it had been somebody the caliber of Barry Alvarez doing that. Then I think there would be a sense of betrayal and all that kind of stuff from Wisconsin fans.”

Leonhard gives Bielema much more credit. He remembers the energy Bielema brought to the program after joining Wisconsin’s staff. Leonhard noted that Bielema “took over the program in a good spot and left it in a good spot.”

“I’ve seen Hall of Fame players get booed because they left for a year,” Leonhard said. “I wouldn’t anticipate anything different here, just because people get emotional. That’s the way it rolls. I don’t think he’s going to have hard feelings either way, whatever response he gets.”

Bielema says he cherishes the memories from his years at Madison, but doesn’t expect to get caught up in the emotions surrounding his return.

The former Iowa defensive lineman compared it to the first time he returned to his alma mater as a visiting coach. He said the feelings accompanying that type of visit didn’t hit him until after the game.

“I think because of the experiences I’ve already had in other places, it’s not going to affect me," Bielema said.