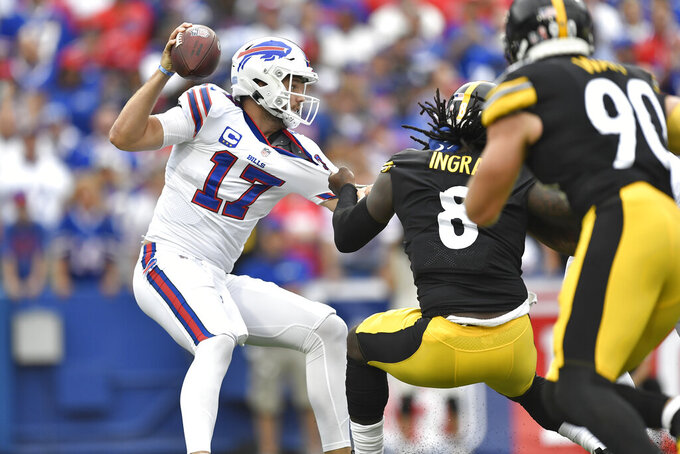 ORCHARD PARK, N.Y. (AP) — Josh Allen knows he can play much better, and didn’t need to be reminded Wednesday of everything that went wrong for him and the Buffalo Bills' offense during a season-opening dud.

Whether it was experiencing jitters from playing in front of a packed home stadium for the first time since 2019, or spending much of the afternoon struggling to elude the Steelers' pass rush, the fourth-year starter is putting last weekend behind.

“The best way to cure that is to go out there and execute and play how we know we can play football,” he added. “Yeah, we’re hungry.”

The Bills should be eager to play again following a 23-16 loss to the Steelers in which their offense looked nothing like the dynamic 2020 attack, which finished second in the NFL in points scored and broke numerous franchise passing and scoring records.

As for Allen, he mostly floundered in his first game since signing a six-year, $258 million contract extension last month.

When Allen wasn’t sailing passes, he was bouncing them into the ground at receivers’ feet. He finished 30 of 51 for 270 yards with a touchdown and lost fumble. The 21 incompletions matched the second most of his career.

Allen blamed part of his struggles on “first-game nerves or jitters or feeling stuff with my feet.”

Coach Sean McDermott made clear he doesn’t expect a repeat from his quarterback this weekend.

“Josh will be ready to go,” McDermott said Wednesday.

Receiver Stefon Diggs has no doubts Allen will respond.

Allen’s struggles reflected those of an offense that appeared out of step for much of the game.

Buffalo managed a touchdown and three field goals despite having eight of 11 possessions cross midfield, including four inside the Steelers 20. Play-calling was an issue, with coordinator Brian Daboll taking the blame for calling two gadget plays, which backfired on third-and-1 and fourth-and-1.

And Allen received little help from an offensive line returning five starters that gave up three sacks and was penalized six times for holding — three times on Buffalo's second possession.

McDermott took no solace in the Bills topping 20 first downs for a 17th consecutive regular-season game, or generating a respectable 370 yards of offense — 26 short of what Buffalo averaged last year.

“That’s not what wins games. Points matter, right?” McDermott said. “What we’re into is points and why we didn’t come away with more points, so that’s what we’re trying to solve.”

Diggs acknowledged the Steelers' defensive scheme was similar to how Kansas City attacked Buffalo by constantly pressuring Allen in the Chiefs' 38-24 win in the AFC championship game in January.

As to how the Bills counter such an approach, Diggs said that was a better question for Daboll.

Allen believes Buffalo has an opportunity to grow from what happened.

“Ultimately it’s one game, and we’re not going to freak out over it,” he said.

“If we would have won that game then maybe we’re not working on some of the things we’re working on now,” Allen added. “There’s always a benefit to it, especially early on. Just don’t want to make a habit of it.”

NOTES: Receiver Cole Beasley, the Bills' most vocal COVID-19 vaccination critic, and long snapper Reid Ferguson went to social media to offer to buy tickets for fans for away games a day after the team and Erie County mandated that all fans attending home games be vaccinated. The Bills and Las Vegas Raiders are the NFL's only teams currently requiring fans to be vaccinated for home games. ... WR Gabriel Davis missed practice with an ankle injury. ... DT Star Lotulelei returned to practice on a limited basis after missing last weekend's game with a calf injury.