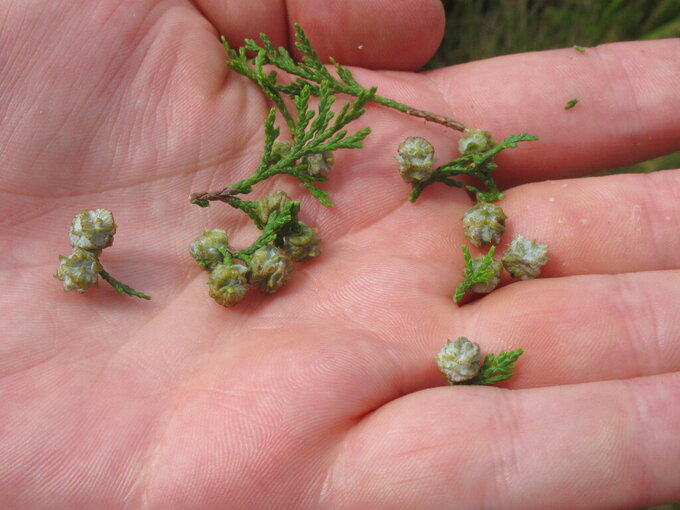 Wayne Parry, ASSOCIATED PRESS
This Sept. 22, 2021 photo shows seed pods of young Atlantic White Cedar trees growing in an area of Double Trouble State Park in Berkeley Township, N.J. where logging was once common. New Jersey officials plan to restore 10,000 acres of cedars in what they say is the largest such effort in the U.S. (AP Photo/Wayne Parry) 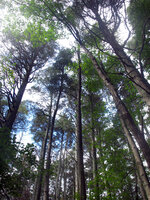 WOODLAND TOWNSHIP, N.J. (AP) — New Jersey plans to restore vast tracts of a coastal tree species threatened by climate change, and will pay for it with money from polluters of groundwater.

The New Jersey Department of Environmental Protection said Thursday its plan to restore 10,000 acres of Atlantic white cedar would be the largest restoration effort involving the species in U.S. history.

The $20 million project will span 10 years and will be paid for from court settlements with manufacturers and distributors of a now-banned gasoline additive that has polluted groundwater throughout the country.

“Through this project, we will reestablish once-dominant stands of Atlantic white cedar, but at higher elevations less vulnerable to rising seas and saltwater intrusion, and provide habitat for globally rare plants and wildlife, while capturing and storing carbon and absorbing floodwaters," said Shawn LaTourette, New Jersey's environmental protection commissioner.

An estimated 500,000 acres of Atlantic white cedar forests once stretched from Maine to northern Florida and along parts of the Gulf of Mexico coast, with 115,000 acres in New Jersey alone. Today, fewer than 125,000 acres remain nationally, 25,000 of them in New Jersey, the state environmental department said.

The trees were heavily logged for their desirability as a disease- and pest-resistant wood source.

But they also have been falling prey to saltwater intrusion as sea levels rise and more frequent storms push saltwater into the freshwater areas in which the cedars grow. Superstorm Sandy in 2012 also downed many of the trees.

Stands of dead cedars haunt New Jersey and other spots along the Atlantic coast, where the bleached-white trees have become known as “ghost forests.”

The idea is to help regenerate cedars in their native areas by removing invasive trees that crowd them out, and letting the cedars naturally drop their seeds to generate new trees. In some spots, cedar saplings grown in a state-run nursery will be planted in higher elevations further away from the possibility of saltwater reaching them.

LaTourette called the cedar forests “a triple benefit" because the forests absorb stormwater runoff that otherwise could contribute to flooding; they help remove carbon from the atmosphere; “and their roots and the unique soil cleans groundwater for us for free,” he said.

New Jersey will pay for the project with money from court settlements with makers and sellers of MTBE, a gasoline additive that helped boost octane ratings, but which tended to separate from stored gasoline and leak into the ground in many spots in the U.S., contaminating water supplies. It has since been phased out in favor of ethanol.

Environmental groups applauded the restoration plan, which still needs approval from regulators of the protected and environmentally sensitive Pinelands region. Officials aim to start work in the second half of 2022, beginning in Wharton State Forest.

“Atlantic white cedar forests are very special places, and you know it as soon as you step into one,” said Carleton Montgomery, executive director of the Pinelands Preservation Alliance. “They are quiet, sublime and magnificent."